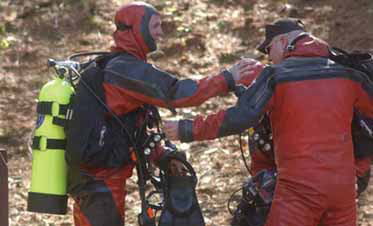 Even though a severe thunderstorm warning was in effect on Sunday, June 22 in”žBroward”žCounty, a diver went out with friends off of”žFlorida’s Atlantic coast, where his air tank was struck by lightning, according to the Associated Press.”ž”ž Stephen Wilson, 36, was diving with three other people near”žDeerfield Beach, approximately 40 miles north of”žMiami, when he surfaced 30 feet from the boat and lightning struck his tank. The other divers got him back into the boat and immediately radioed in for help. The victim was then rushed to the beach where he was given CPR as emergency personnel attempted to resuscitate him. Wilson was later pronounced dead at North Broward Medical Center, which planned an autopsy to determine if Wilson drowned or was electrocuted.

JEMS Editor in Chief A.J. Heightman comments, Ë™The incident presents an important safety issue that EMS, fire and rescue personnel and should be aware of, either the patient or the other scuba tanks and metal objects should be removed from the area to reduce the risk of additional lightning strikes to rescuers or bystanders.à“”ž