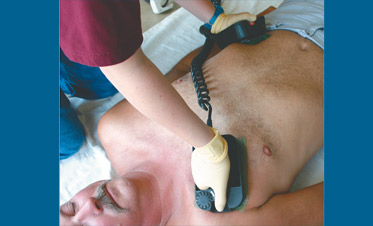 The Science
This study comes from the Home AED Trial (HAT). The researchers randomly assigned 7,001 patients with previous anterior-wall myocardial infarction (MI) who weren’t candidates for an implantable cardioverter-defibrillator to receive one of two responses to sudden cardiac arrest occurring at home. These were either the control response (calling EMS to perform CPR), or the use of an AED followed by calling EMS to perform CPR. The primary outcome was death from any cause.

The researchers concluded that, “For survivors of anterior-wall myocardial infarction who were not candidates for implantation of a cardioverter-defibrillator, access to a home AED did not significantly improve overall survival, as compared with reliance on conventional resuscitation methods.”

The Street
OK, let’s look at this more closely. The group of patients for whom they provided AEDs were very ill individuals. They were NOT candidates for implantable AEDs. They were relatively young. Not surprising, the majority died not from sudden cardiac arrest treatable by an AED but from complications of their other diseases. Therefore the patients treatable by the AEDs get drowned by the overwhelming numbers of other deaths.

So let’s look more closely at the AED-treatable deaths. The majority occurred at home, and half were witnessed. Add to that the fact that the AED was used on more than half of them. This surpasses what’s occurring in most public AED program reporting their data.

Of the 14 that were defibrillated, four survived. That’s a 28% survival rate, which far exceeds the national rate of 5%. Furthermore, owners of the AEDs used the devices on neighbors in four separate instances (outside the guidance of the trial) with a 50% survival rate!

So, did the AED make a difference overall in this very sick population of patients who weren’t candidates for implantable defibrillators? Ask the six survivors and the two neighbors.