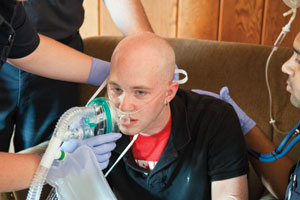 When EMS providers hear the word, “capnography,” most think of such phrases as “ventilation vital sign,” “airway management tool,” “shark fin” and “tube placement.” Although we shouldn’t minimize these important uses of capnography, the additional, powerful assessment capabilities capnography offers are far greater. Capnography can rapidly and accurately alert clinicians to perfusion and/or metabolic problems and provide deeper insight than traditional assessment tools. So let’s broaden the capnography perspective. Yes, it’s a device we place at the patient’s airway; but capnography is measuring a by-product that goes much deeper than that.

The Greeks first believed that the body had a central combustion center and that this system had a by-product. They named this by-product capnos, which is Greek for “smoke.” Today, we call this combustion center “metabolism” and capnos “carbon dioxide” (CO2). Simply put, CO2 is the “smoke” of metabolism.1 More specifically, CO2 is created after the acidic by-products of metabolism are buffered by bicarbonate:
Acid (2H+) + Bicarbonate (HCO3-) <=> CO2 + H2O

Because CO2 is a by-product of metabolism, anything affecting the metabolic rate affects CO2 production and, consequently, corresponding end-tidal carbon dioxide (EtCO2) levels. Metabolic pathways must be supplied with essential nutrients, such as sugar, water and oxygen for a normal metabolic rate to occur. So if perfusion is compromised, so is the delivery of these components necessary for metabolism. The result is a decreased metabolic rate, resulting in decreased CO2 production. Or, if a patient is in metabolic acidosis (clinically defined as an acidotic pH with depleted bicarbonate), less CO2 will be created, resulting in lower EtCO2 levels.

Anaerobic metabolism increases during poor perfusion states, which increases acidic byproducts. However, simply increasing acid in the system doesn’t equate to an increase in CO2 production.
The reason is quite complex. However, an oversimplified explanation is that bicarbonate availability and catalyst concentrations are the rate-limiting factors to CO2 production. It isn’t like a chemistry lab in which you’re putting drops in a flask waiting for the water to turn a pink hue.

In the human body, bicarbonate levels are strictly regulated by the kidneys and are slow to respond to pH changes. Thus, you can have all the acid you want building up in the system, but without a proportional increase in bicarbonate available for buffering, you won’t see the increase in CO2 production that may seem intuitive.

Capnography Limitations
Two important limitations to capnography relate to circulatory and metabolic assessment. Although it’s a diagnostic tool, capnography isn’t specific. Capnography provides a reliable and accurate EtCO2 level, but there’s no printout or voice from the machine that tells you what is causing the EtCO2 to change. Underlying causes must be identified by diving into your patient’s clinical picture and coupling the capnography reading with your traditional assessments.

Another limitation occurs when a patient with compromised perfusion and/or metabolic status also has an excessive respiratory rate (RR) or tidal volume (VT); these will also lower the patient’s EtCO2 levels. Capnography can’t differentiate when more than one etiology is affecting EtCO2. For example, in patients with diabetic ketoacidosis (DKA) and Kussmal’s respirations, the EtCO2 will be very low secondary to depleted bicarbonate and deep and rapid respirations.

Capnography can’t tell you how much of the low EtCO2 is from depleted bicarbonate vs. Kussmal’s respirations. However, through experience, you can begin to develop your own “anecdotal EtCO2 thresholds” that will help you distinguish between a low EtCO2 attributed to just an increased respiratory rate vs. an excessively low EtCO2 that might have a compounding circulatory and/or metabolic issue in play.

Let me illustrate these concepts by discussing six relevant cases.

Case One
You respond to an 86-year-old female patient needing an interfacility transfer for suspected pneumonia. The patient is sitting in a wheelchair in her bedroom. She appears alert and orientated, and slightly pale with mild labored breathing. She has a pulse of 112 bpm, blood pressure of 102/66, a RR of 24 with no excessive VT and no fever. Are you suspicious of compensated shock? Good.
You don’t need capnography to suspect compensated shock. What capnography provides is a more in-depth perfusion assessment on compensated vs. decompensated shock, as well as the severity of shock. Research has shown that an EtCO2 greater than 20 indicates perfusion is adequate.1
If this patient’s EtCO2 were 30, you should consider dehydration or other “mild” circulatory issues. If it were 26 with all other vitals the same, your suspicions of compensated shock would be confirmed.
If the EtCO2 were in the low 20s, you could now be positive the patient was in compensated shock and should be concerned about the imminent “transition” to decompensated shock (again, assuming no excessive RR or VT).

Case Two
EMS providers can use capnography to trend the success, or failure, of fluid resuscitation based on the change of EtCO2 values.2 Optimally, we’d like to see EtCO2 trend upward, indicating an improvement in the patient’s circulatory status. For example, you’re treating a hypotensive, tachycardic trauma patient with an EtCO2 of 18 (no excessive RR or VT). After fluid treatment, you trend the patient’s EtCO2 in a positive direction to a level of 22, and the patient’s tachycardia and hypotension are less severe as well. Although the patient’s blood pressure and pulse have improved, they’re ambiguous as to the perfusion status of the patient.

However, an EtCO2 of 22 is a diagnostic indicator that your treatments have significantly improved perfusion. Remember, blood pressure doesn’t necessarily equal perfusion, just like ventilation doesn’t equal oxygenation. Thus, knowing the EtCO2 level is crucial to more specifically assessing perfusion status. However, trending blood pressure is still necessary to avoid displacing clots that the body has created to slow bleeding.

Case One Revisited
The patient doesn’t have to be an obvious trauma patient to use the perfusion trending capabilities of capnography. Let’s go back and reconsider the patient from the first case. If her EtCO2 had been 22, we could have still treated her with judicial fluid resuscitation and seen whether her EtCO2 trended upward.

If her EtCO2 had improved to 24—26, you would have just decreased the severity of her compensated shock. This is clinically significant. Without capnography, you may not have known how close the patient was to decompensated shock or the true effect of your treatment.

Case Three
Research on pediatric diabetics has found that a threshold EtCO2 of 30 can be used to differentiate a diabetic suffering from hyperglycemia with DKA (DKA is less than 30 EtCO2), from a diabetic with hyperglycemia who isn’t in DKA (EtCO2 greater than 30).1
If a patient is hyperglycemic without an excessive RR or VT (no Kussmal’s ventilations), assess their EtCO2. If their EtCO2 is greater than 30, they probably still have adequate bicarbonate. If their EtCO2 is less than 30, bicarbonate is now becoming depleted and we’d expect their blood gases to show metabolic acidosis.

Without capnography, we often assume that patients are in DKA if they have high blood sugar. Kussmal’s would be another obvious sign of DKA, but patients can be DKA for a period of time prior to the onset of Kussmal’s.

Kussmal’s is a frank indication of metabolic acidosis and is initiated later by the hypothalamus after other compensatory measures have failed.

By using capnography to become more specific on your assessment of hyperglycemia, you can gain deeper insight into your patient’s metabolic status, as well as provide a more detailed hand-off report to the hospital. Also, it should guide how aggressive you need to be with fluid resuscitation, as well as insulin administration if you work in a system that allows that treatment regime.

Case Four
The American Heart Association Guidelines for CPR and ECC algorithms on tachycardia and bradycardia often have an early fork in the road of treatment based on a simple, yet fundamental question: stable or unstable? Now that we know the circulatory assessment capabilities of capnography, it can become the perfusion tool of choice to answer this proverbial question.
For example, a patient in ventricular tachycardia with an EtCO2 of 24 (no excessive RR or VT) is stable from a perfusion perspective. If the same patient had an EtCO2 of 17, they’re below the EtCO2 perfusion threshold of 20 and therefore, unstable. Or consider an unconscious patient with a bradycardic rate of 32. Although their mentation has deemed them as obviously unstable, capnography still has value in this case beyond airway and breathing monitoring in an unconscious patient. If you pace the patient, use EtCO2 to assist with confirming mechanical capture and the effectiveness of mechanical capture.

Case Five
You respond to a 61-year-old female patient with a general complaint of “just not feeling well.” Her blood pressure is 108/72 with a regular pulse of 98, and she’s afebrile. Capnography can triage patients with ambiguous complaints, such as dizziness, malaise and a general feeling of sickness. If a patient has a normal EtCO2 level, a BLS track might be appropriate. If a patient has excessively low EtCO2 levels that can’t be explained by increased RR or VT, further investigation is warranted, and EMS providers should give the patient a full ALS assessment. Further, if the providers choose an ALS track, they should capture a 12-lead ECG because it’s a critical part of this patient’s clinical picture.

Case Six
Cardiac tamponade and/or a tension pneumothorax with enough displacement to compress the heart and great vessels will cause low EtCO2 levels secondary to compromised cardiac output. If you’re lucky enough to have aggressive fluid resuscitation work for your cardiac tamponade patient, we’d expect to see a positive trend upward in the patient’s EtCO2. Likewise, after decompression of a tension pneumothorax that was compressing the mediastinum, we’d also expect to see EtCO2 rise. However, if EtCO2 stays low even after decompression of the chest, consider two things: 1) your decompression wasn’t effective, and the heart and great vessels are still compressed or 2) there’s another issue causing shock in the patient. Maybe the blunt/or penetrating trauma that caused the tension pneumothorax also caused internal bleeding. Again, capnography isn’t specific to what’s causing EtCO2 changes and can’t differentiate when more than one etiology is affecting EtCO2.

Conclusion
By now, we’ve hopefully moved capnography into a new, expanded category deeper than the typical uses for airway management. Thoroughly understanding the origin of CO2 and which factors, other than airway and breathing, can change EtCO2 levels helps EMS providers use capnography for circulatory and metabolic assessment. Providers are able to move from the theoretical to the practical and use capnography to gain deeper insight into the circulatory and/or metabolic status of your patient.

The only missing piece of the puzzle is practice. If you want to be able to use capnography to its fullest potential, you should use capnography for every patient with altered mentation and/or ABCs. By doing this, EMS providers will begin to develop an intrinsic vocabulary on what “the norm” is for patients with various ailments. With this framework, a deviation from the norm becomes clearer. Just like with breath sounds, assess breath sounds on every patient to know what normal breath sounds are. Subsequently, when something is out of the ordinary, it becomes obvious.

The final step is then being able to incorporate abnormal findings into a more accurate and expanded differential diagnosis. Specifically for capnography, first rule out an excessive RR and/or VT. Then, let experience guide you to identify excessively low EtCO2 levels. Finally, put that in the context of your patient’s circulatory and/or metabolic picture and see how that changes your clinical perspective. Update your differential diagnosis accordingly and give yourself a pat on the back as your capnography capabilities are in a whole new category of progression and competence.

Troy Valente, BA, NREMT-P, currently works for the Greeley Fire Department in northern Colorado as a firefighter/paramedic. He’s also the author of Capnography, King of the ABC’s: A Systematic Approach for Paramedics. Contact him at capnography@hotmail.com.

Disclosure: The author has reported receiving honoraria and/or research support, either directly or indirectly, from Oridion.