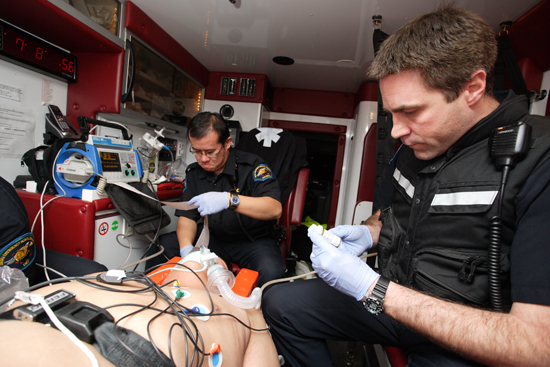 We can all agree prehospital ST-elevation myocardial infarction (STEMI) care has evolved in the last decade. With the widespread availability of 12-lead ECGs, paramedics worldwide have been able to greatly decrease morbidity and mortality for their patients. Now, new research out of Austria points to a further decrease in morbidity and mortality with early oral beta-blocker therapy.

Whether identified by the EMS physician or the attending ED physician, patients identified as having a STEMI were to receive 2.5 mg of oral bisoprolol within 30 minutes of the first ECG or had it withheld for 24 hours. Patients who presented with symptoms contraindicating beta-blocker administration (i.e., hypotension and heart blockage) were excluded.

Results showed that of the 664 total patients included in the study, 343 patients (52%) received bisoprolol within 30 minutes of ECG confirming STEMI vs. 321 (48%) patients who had beta-blockers withheld for 24 hours. The short-term results alone are compelling, with only five patients who received early bisoprolol dying within 48 hours compared with 19 in the non-immediate group. After data analysis, 30-day all-cause mortality in the immediate administration of beta-blocker group were 0.89% likely to have a fatal cardiovascular event vs. 4.34% in the non-immediate group. Many previous studies have been performed on IV beta-blocker therapy, but this is the first to show promise in the use of oral beta blockers.

Considering that the study parameters required patients to receive beta-blockers within 30 minutes of discovery, the study shows that EMS played a large part in significantly decreasing mortality. This is something the authors acknowledge in their conclusion, suggesting that the administration of beta-blockers be adopted as “an essential part of the emergency treatment of patients with STEMI in the out-of-hospital setting, as the benefit seems to outweigh potential complications.”

Coming to us from Australia, this article is a follow-up to 2011 research that showed 23% of all hospital-acquired Staphylococcus aureus (commonly known as staph) infections came from peripherally-inserted IVs (PIVs). This article was a retrospective review of patient charts for all patients presenting to one large metropolitan ED over a 30-day period. Patients with major, life-threatening injuries and illnesses were excluded. Overall, 570 patients had PIVs started. Of those, 284 (50%) went unused during their time in the ED. Additionally, only 62 (22%) patients in the PIV group were admitted to the hospital and of them, 23 patients (45%) had their PIV completely unused 72 hours after admission.

As stated in their limitations, the authors do not account for IVs that are unused but necessary, such as patients with chest pain or seizure patients. There is also not a follow-up as to infection rates in this cohort of patients. It also does not address if unused IVs have a higher infection or adverse reaction rate.

Although much praise is due to the authors for evaluating a procedure that, at times, is unnecessary, EMS providers should continue to use best judgment in starting IVs in the prehospital setting.

Either Way, It Hurts

It seems like a lot of what we do in EMS relates to pain management. With the advent of synthetic opiates, such as fentanyl (Sublimaze), as well as hydromorphone (Dilaudid), prehospital pain management has never been more effective; however, in patients with acute pain, should we give a large bolus of opiate, or titrate to effect?

A total of 350 patients were randomized by computer to receive either 2 mg bolus or the “1+1″ titration protocol of hydromorphone. Patients with chronic pain syndrome were excluded. Of patients randomized to the titration group, 61% (102/168) did not request additional analgesia beyond the 1 mg initial dose. In the titration group, 42% (71/168) patients met the satisfactory end point for analgesia at 60 minutes following the initial 1 mg dose. From both groups, 112 patients reported mild-to-no-pain at 60 minutes from each group, accounting for roughly two-thirds of the overall patients enrolled. Given that the primary end-point studied was reported by patient pain scale, the authors do report some bias; however, according to their research, one-third of patients still requiring additional analgesia is in line with patient tolerance and opiate requirement from other studies.

It should come as no surprise that many patients felt relief with 1 mg of hydromorphone. Although the authors showed no adverse effects from 2 mg of hydromorphone, It should make us all think to start low with our opiates and add slowly, keeping in mind that patients have different tolerances to opiates.