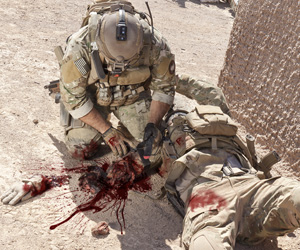 The decade of war in Iraq and Afghanistan has been unique from prior American conflicts because of a new partnership between military medicine and civilian trauma experts, combined with an innovative data collection system, the Joint Theater Trauma Registry (JTTR), which has tracked soldiers’ injuries throughout the war. This has allowed researchers to monitor the usefulness and safety of trauma treatments used by the military.

Several “combat tested” therapies have begun to be adapted by civilian trauma centers and EMS providers back home, most often related to treating victims of multiple traumas. Injuries caused by IEDs span the spectrum of trauma. They produce huge concussive forces, which cause blast injuries, particularly to the air-filled organs (i.e., ears, lungs and bowels) as well as to the brain, which is a common cause of traumatic brain injury (TBI) in soldiers. Often packed with shrapnel, IEDs also produce multiple penetrating injuries, similar to multiple simultaneous gunshot wounds.

The lessons learned from dealing with these horrendous combat wounds have begun to be translated to our daily care of our trauma patients in American EMS systems.

Tourniquets
The tourniquet is now, once again, an important tool in the toolbox of EMS providers.

For decades, tourniquets were considered dangerous because common thought was that they cause tissue damage. Major Blackwood, a British field surgeon in World War I, called them “instruments of the Devil” because of the ischemic damage caused to limbs by indiscriminate use and by the lack of a field evacuation system for injured soldiers.1 Today, better-designed tourniquets and focused training in prehospital tourniquet use have proved that short tourniquet times of less than two hours are safe and result in few cases of ischemic limb injury.

One 2011 military study demonstrated that early tourniquet use, prior to the onset of hemorrhagic shock, resulted in a 96% survival–compared to 4% survival when applied after shock onset. Few (if any) permanent limb ischemic injuries have been shown to have resulted from military tourniquet use.2

Published tourniquet use and benefits of protocols also describe the use of a tourniquet on a victim who has sustained multiple injuries and has severe extremity hemorrhage, but also needs stabilization of the ABCs.3 This became a common encounter during the care of patients after the Reno airshow disaster; the mass shootings in Aurora, Colo.; the Arizona shooting involving Congresswoman Gabby Giffords; and the Boston Marathon bombing.

In these situations, tourniquets rapidly placed by the provider immediately, saved lives. The provider can then turn their attention to airway management, interventions to improve breathing like needle thoracostomy, as well as IV/IO placement and fluid administration as needed to restore circulating intravascular volume. After the patient has been stabilized and the “safety net” established, the medic can then turn their attention to re-evaluating and possibly removing the tourniquet and replacing it with a pressure dressing.

Bottom line: The use of tourniquets to quickly stop severe bleeding should be an important part of the prehospital care of patients.

Hemostatic Adjuncts
Hemostatic adjuncts have occupied a “niche market” for both military and civilian EMS providers. These products, designed to be placed into a bleeding wound to assist the body’s ability to form a clot, are effective.

Such agents as kaolin, chitin and zeolite are used in either granular form or incorporated into gauze. They work by giving the bleeding vessel a substrate on which to form a clot. In addition, some products may augment the body’s intrinsic clotting mechanisms.

Hemostatic adjuncts have been used by military medics throughout the Iraq and Afghanistan wars. Given the effectiveness of a simple pressure dressing and the widespread availability of tourniquets, these specialized products have not been required often. However, these agents can be lifesaving, particularly in difficult-to-manage wounds, such as those of the groin or axilla. They provide effective hemorrhage control for wounds that aren’t amenable to other methods of hemorrhage control and which might otherwise be fatal. Current products, especially those impregnated into gauze for packing into the wound, have proven effective and safe in the battlefield and civilian environments.
Hypotensive Resuscitation

The concept of hypotensive resuscitation, which is also known as “permissive hypotension,” has actually been around since first proposed by Walter B. Cannon during World War I. Cannon recognized the importance of having a surgeon “ready to check any bleeding” that resulted from the improved blood pressure after fluid infusion.4 In World War II, Henry K. Beecher, MD, stated that a systolic blood pressure of 85 was adequate for those awaiting surgery for long periods.5

However, during the Vietnam War, the concept of using large volumes of crystalloid fluid and restoring the injured patient’s blood volume to “normal” became an accepted practice. It has been taught to several generations of EMS providers, surgeons and ED physicians.

More recently, other concepts have gained acceptance in military and civilian trauma communities. These include the concept of allowing the trauma patient to be moderately hypotensive and only replacing enough volume to treat shock. This is based on the theory that the body’s natural response after trauma is to minimize hemorrhage by forming a fragile clot on the bleeding vessel. Excessive IV fluid administration can actually result in increased bleeding from the injured vessel by the following proposed mechanisms:
“¢ A rise in blood pressure, which results in increased pressure on the delicate clot, causing it to rupture;
“¢ An increase in the intravascular volume, which stretches the vessel and increases tension on the clot, causing it to fail; and
“¢ The body’s ability to clot, which is the result of clotting factors and platelets circulating in the blood. When excessive amounts of crystalloid are administered, these critical factors are diluted, interfering with clot formation and strengthening.

Evidence now suggests that allowing the patient to remain moderately hypotensive (systolic BP in the 80—90 range or the maintenance of a radial pulse) maximizes the body’s ability to slow bleeding using these intrinsic mechanisms. So, “Don’t pop the clot” is the current recommendation for penetrating trauma of the torso.

A common protocol for permissive hypotension in trauma is the following: In a patient with penetrating trauma who is maintaining a systolic blood pressure at or above the 80—90 range or who has a radial pulse, IV access should be obtained with a saline lock but no IV fluid administered. If the systolic BP falls below 80—90, or if the patient loses the radial pulse, then calibrated fluid boluses of crystalloid, 500—1,000 ccs at a time, should be administered, then the patient reassessed.

When the systolic BP or radial pulse is restored, no further fluid is necessary. The goal is not to restore BP to “normal,” but to maintain perfusion of vital organs and avoid shock while simultaneously allowing the body to avoid increasing hemorrhage.

Several cautions must be stated regarding the hypotensive resuscitation strategy for trauma. First is that this has only been studied with confidence in adults. Although studies of permissive hypotension in children are ongoing, currently the Pediatric Advanced Life Support (PALS) protocol should be followed. This includes giving 20 cc/kg boluses of crystalloid to maintain or restore a normal BP for age.

Children, particularly those younger than 8 years old, respond differently than adults to hemorrhage. Children tend to increase pulse rate and systemic vascular resistance to maintain a normal BP for as long as possible. When hypotension finally occurs because of a failure of these compensatory mechanisms, the shock state can be difficult or impossible to reverse. Therefore, hypotension/shock should be avoided in children by restoring intravascular volume with crystalloid until BP is normal or near normal.

Another precaution regarding this permissive hypotension strategy is that it shouldn’t be used in patients with a head injury. In the face of a cerebral injury, the swelling and increased pressure in the skull makes it difficult for the brain’s auto-regulatory mechanisms to maintain critical brain perfusion. Keeping the blood pressure at normal levels promotes cerebral perfusion in the face of this increased intracranial pressure, minimizing secondary injury of the brain.

Tranexamic Acid
Tranexamic acid (TXA) is an antifibrinolytic medication that inhibits the body’s natural breakdown of clots after injury. In a large international study (CRASH-2), followed by a study of British and American soldiers (MATTERS), this medication decreased mortality in patients with traumatic hemorrhage.7,8

TXA has been used safely by surgeons for orthopedic procedures and is FDA approved for use in heavy menstrual bleeding (in Great Britain, it’s actually available over the counter for this indication). It’s cheap, easy to administer and has few side effects.

Importantly, the CRASH-2 data demonstrated that TXA had the largest mortality benefit when used as soon as possible after the injury–ideally less than one hour. However, when use was delayed more than three hours, the benefit to the patient disappeared and an increased mortality was observed.7

Because of this one-hour window, this medication may be best administered by prehospital providers. In fact, EMS providers in Europe and Asia have been using TXA for years, and several North American EMS agencies, such as those in Alberta, Canada, Oklahoma City and New York City, have begun using TXA for severely injured trauma patients. (Read a related JEMS article at www.jems.com/article/patient-care/role-tranexamic-acid-ems-preoperative-tr.)

Although crystalloid can replace intravascular volume (which may be lifesaving), blood replaces all of the important components that the body has lost, including oxygen-carrying red blood cells, as well as platelets and clotting factors to stop hemorrhage. So clearly, the ability to replace what the body has lost would be naturally superior to simply replacing volume with crystalloid, diluting all of the body’s blood components and rendering them less effective.

The use of blood products in trauma, in the proportions that they are lost (the proper ratio of red blood cells, clotting factors and platelets) has become the goal of trauma care in the hospital. This concept is reflected in the “massive transfusion protocols” developed by civilian trauma centers and based on battlefield success with using whole blood transfusions for injured patients.

Although whole blood is available on the battlefield via immediate transfusions from other soldiers to the injured patient, it isn’t easily available in civilian facilities. There, donated blood is broken down into three components: red blood cells, platelets and plasma. Therefore, these massive transfusion protocols call for the following actions:
1. Minimizing crystalloid administration to trauma patients, and
2. Replacing blood products in a specified ratio of red blood cells, platelets and fresh frozen plasma to come close to replacing “whole blood.”

With the exception of some hospital-based air ambulance agencies, the capability to use blood products in the field is still a futuristic concept. However, work continues to develop “artificial blood,” which will replace some of the capabilities of blood in trauma. Already, French and German military medical providers in Afghanistan are using a novel dried plasma product for resuscitation of prehospital and ED trauma patients. This human plasma is “freeze dried” or “spray dried” into a powder containing the clotting factors lost by the body in hemorrhage. This can be reconstituted with saline by EMS providers and administered in the place of crystalloid, providing the patient with volume resuscitation as well as replenishment of critical clotting factors.

In a 2011 Journal of Trauma article, researchers demonstrated this lyophilized plasma to be as effective as the standard “fresh frozen” plasma commonly used in the hospital.9 After further study and clearance by the Food and Drug Administration (FDA), this product could well be stocked by civilian EMS agencies to be used for severe trauma.

Other Hemorrhage-Control Devices
Junctional compression “tourniquets” (such as the Combat Ready Clamp (“CRoC”) discussed in this supplement are currently being field tested by the military and showing promise for the control of hemorrhage in the groin, an area where bleeding can be severe and very difficult to control. A new hemorrhage control device, the iTClamp, also holds promise for use both in civilian EMS and for the military.