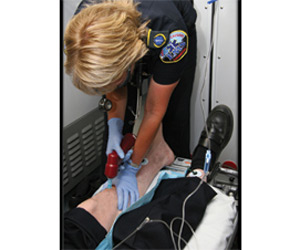 EMS was dispatched Code 3 to an unresponsive male in a park. On arrival, witnesses reported the patient was assaulted with a metal crutch to the back of the head. The crutch had been impaled in the patient_s head, but a bystander removed it prior to EMS arrival. The patient was found unconscious, C-collared and boarded by the fire department. The police had secured the scene. The patient was immediately loaded into the ambulance and emergently transported to the nearest trauma center.

During rapid physical exam performed en route, the patient had an initial Glasgow Coma Scale score of 3, BP 140, heart rate 110, and respiratory rate 16 but labored. He had a metal screw embedded in his occipital scalp with active bleeding, which was controlled with bandaging.”ž

The rest of his physical exam revealed no significant traumatic findings. Bag-valve-mask ventilation (BVM) was initiated to supplement his inadequate respiratory efforts. Shortly thereafter, a nasal tube was inserted with capnography readings of 35 to 45 mmHg and fogging of the tube. IV access was attempted twice without success. Medical control was notified of the emergent transport and a trauma alert was called. Time from patient contact to emergency department (ED) arrival was 12 minutes.

Upon arrival at the ED, the patient remained at a GCS of 3 with spontaneous shallow breathing and an oxygen saturation of 92%. He was, however, found to have no capnography reading or breath sounds. His nasal tube was removed, he exhibited a gag reflex, and he could not be intubated without induction medications. Therefore, BVM ventilation was carried out while multiple IVs were attempted simultaneously without success. A right proximal tibial intraosseous (IO) line was then placed for rapid vascular access, using an EZ-IO 25 mm/15 gauge needle. After positive blood flash on aspiration, a firm 10 cc saline flush was performed to open the marrow space and improve IO flow. Lidocaine (100 mg) was administered for head injury precautions, followed by rapid sequence intubation (RSI) with 20 mg of etomidate and 70 mg of rocuronium through the IO line.”ž

Within seconds, the patient was sedated and paralyzed. He was then intubated without difficulty with an 8.0 mm endotracheal tube. Direct cord visualization, proper colormetric change on end-tidal CO detection and equal breath sounds confirmed proper tube placement. The patient was then placed on a propofol drip at 20 mcg/kg/min through the IO line for continued sedation with titration to effect.”ž

The patient received the initial focused assessment with sonography in trauma (FAST) exam and screening X-rays, which were all negative. The screw was removed from the patient_s occiput, and his wound was cleaned and dressed. He was then packaged and prepared for transport to the CT scanner. Vecuronium (10 mg) and Ativan 2 mg were given to maintain paralysis and sedation during the scans because the patient was intermittently agitated.”ž

CT scans of the head, cervical spine, abdomen and pelvis were negative for any acute process, as were thoracic and lumbar spine X-rays. The patient was admitted to the surgical ICU with diagnoses of altered mental status, closed head injury and respiratory distress. The next day sedation was decreased. The patient was weaned from the ventilator and was eventually extubated without complications. He remained alert with a non-focal neurological exam.”ž

He was placed on the clinical institute withdrawal assessment protocol due to his history of chronic alcohol use. With the assistance of physical therapy and rehabilitation, he was able to ambulate with a walker. The patient had an uneventful hospital course and was discharged on day five with the help of social services to a respite bed.

This trauma patient arrived with an unprotected airway and no vascular access. Two questions are central to the discussion. In the present day, is a blind nasotracheal intubation (BNTI) attempt justified in a head-injured patient, or in any patient? And should an IO line have been placed earlier in the field to gain critical access, after several unsuccessful IV attempts, in this unstable patient?

BNTI is not without complications, as has been discussed in the literature. In addition, BNTI is traditionally contraindicated in a patient with a possible basilar skull fracture or increased intracranial pressure. Basic airway control with BVM ventilation can be performed proficiently to maintain adequate oxygenation and ventilation, especially in a patient who possesses a gag reflex but requires respiratory assistance. This was effectively demonstrated in this patient in the ED while obtaining access for RSI.”ž

The addition of an oropharyngeal airway (or nasopharyngeal airway in the non-head-injured patient) can further assist in this intervention if the patient doesn_t have a gag reflex. Other airway devices may also be considered, such as the King airway, Combitube or the laryngeal mask airway (LMA). These supraglottic airway devices are easy to place and are not fraught with the complications of BNTI.”ž

Just as there are alternative airway maneuvers, there are also backup devices for vascular access and IO infusion. After multiple failed IV attempts in the prehospital setting in a critical patient, an IO line can easily be placed within seconds with minimal complications.

The patient doesn’t need to be in cardiac arrest to be a candidate for IO placement. Therefore, in any critical patient with decreased mental status, poor peripheral access and a medical need for a line, the IO route should be considered. The more alert and responsive a patient is after insertion, the more the pain of infusion must be managed by a slow local infusion of 2% cardiac lidocaine into the marrow space through your IO device and titrated to effect.

Prehospital providers should be adept at the basic maneuvers of airway control, as well as with alternative devices for vascular access. BVM ventilation may be a life-saving intervention for a critical patient and should be mastered. Exercise extreme caution when considering BNTI, especially in the head-injured patient. In addition, the IO line is a rapid, safe and easy method to gain vascular access, and should be performed in the critical patient after unsuccessful IV attempts. Prehospital providers should be familiar with their IO device of choice. JEMS