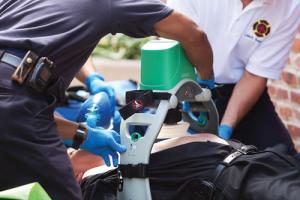 The Science
This study is a subset retrospective analysis from the North American LUCAS Evaluation (NALE) project examining interruptions in CPR while applying the LUCAS device. Providers were surveyed on what they believed the estimated amount of interruption time was, while investigators calculated actual interruption time via specialized software. A total of 113 data files were available for analysis; however, only 32 were examined. The other 81 cases lacked sufficient data to be included in the analysis. Also, all rhythm types were included in the analysis of this study.

Investigators conclude interruptions in chest compressions are longer than previously thought but that it is possible to apply and activate the device in less than the recommended amount of time allowed. In order to help decrease interruptions, they also suggest agencies that deploy mechanical CPR devices develop quality assurance programs around timely application and minimizing interruptions.

Doc Wesley: When we introduced the AED back in the 80s we saw similar interruptions to CPR. At that time we believed the defibrillation was the most important factor for cardiac arrest survival. This resulted in everyone stopping chest compressions while the AED was started, applied and allowed to analyze the rhythm. This frequently took 2—3 minutes if not longer, and we eventually found that this resulted in low rates of cardiac arrest survival. We now know that high-quality CPR is the most vital component in cardiac arrest resuscitation.

But with the arrival of such mechanical CPR devices as the LUCAS, the potential for chest compression interruptions exists while the device is applied.

If high-quality chest compression is important and mechanical devices can provide this in a consistent reliable manner, it would be natural to conclude that the device should be attached and activated as soon as possible. But the American Heart Assocation (AHA) guidelines state that compression interruptions should be limited to less than 10 seconds. Can a mechanical CPR device be applied that quickly? This study indicates that it can’t. The average interruption was 30 seconds, and providers consistently underestimated the length of the interruption.

Those involved in this study have changed the procedure for applying the LUCAS to include the following: First, they don’t apply it until the second or third rhythm analysis. This ensures that high-quality manual CPR is started and vascular access and airway management is accomplished first. Research has shown that most successful defibrillation occurs during the first through third delivery. Once you reach that point, you know you are going to be working the code for a while and that this may be the better point to apply a mechanical CPR device. Second, these providers have adopted a two-step application process whereby the back plate is applied first and then the actual device during manual CPR.

Here at HealthEast, we have found that this progressive approach to LUCAS application results in minimal interruptions. I would recommend that all providers utilizing the LUCAS or similar mechanical CPR devices take the results of this study into consideration when implementing them in their service.

Medic Marshall: The authors of this study did a fantastic job with what they had to work with. Before jumping to any major conclusions about the performance analyzed in this paper, it’s important to note that we’re only looking at 32 cases that were examined only for interruption time. The results show that 16 cases had the LUCAS applied in less than 32.5 seconds and that 16 cases had applications greater than 32.5 seconds. The number of applications is pretty small to warrant significant conclusions about performance however, it does raise an important question: Do the benefits of interrupting CPR for the application of a mechanical device outweigh the potential negative effects of those interruptions?

In these cases, I would agree with the results of this study, but am compelled to remind you that any delay or interruption in CPR can be detrimental to the patient. In cases where mechanical CPR devices are applied, quality of CPR is significantly better, and depending on the defibrillator device you are using, you may even be able to shock patients during CPR without stopping compression. The benefit of a pause to place the device on the patient in some cases may outweigh the consequences of continuing to perform manual CPR. More thorough research is needed on what affect the LUCAS or any mechanical CPR device has on a patient from survival to discharge because this is the ultimate goal of cardiac arrest resuscitation.

At the end of the day, I expect to see more research on the influence of mechanical CPR devices as they become more prevalent in EMS.

Abstract
Background: Quality of cardiopulmonary resuscitation (CPR) is a key determinant of outcome following out-of-hospital cardiac arrest (OHCA). Recent evidence shows manual chest compressions are typically too shallow, interruptions are frequent and prolonged, and incomplete release between compressions is common. Mechanical chest compression systems have been developed as adjuncts for CPR but interruption of CPR during their use is not well documented.

Aim: Analyze interruptions of CPR during application and use of the LUCAS chest compression system.

Results: In the 32 cases analyzed, compressions were paused a median of 32.5 s (IQR 25—61) to apply LUCAS. Providers’ estimates correlated poorly with measured pause length; pauses were often more than twice as long as estimated. The average device compression rate was 104/min (SD 4) and the average compression fraction (percent of time compressions were occurring) during mechanical CPR was 0.88 (SD 0.09).

Conclusions: Interruptions in chest compressions to apply LUCAS can be <20 s but are often much longer, and users do not perceive pause time accurately. Therefore, we recommend better training on application technique, and implementation of systems using impedance data to give users objective feedback on their mechanical chest compression device use.