You’re dispatched to the scene of a residential facility for a patient with difficulty breathing. You and your partner arrive to find an elderly male on his living room couch in clear respiratory distress as indicated by tripod positioning with accessory muscle use, pursed lip breathing, and paradoxical chest wall/abdominal movements (positive Hoover sign).

Initial impression of your patient reveals he has difficulty speaking due to his increased respiratory effort and explains that recently he’s unable to catch his breath. He says he recently ran out of his home DuoNeb (ipratropium bromide/albuterol sulfate) treatments.

Further questioning reveals he’s a chronic smoker and has a confirmed diagnosis of chronic obstructive pulmonary disease (COPD) and asthma, both of which are pharmacologically managed without home oxygen administration.

When asked supplemental questions regarding allergies and current symptoms, the patient appears to be confused, which is consistent with his progressively declining mental status.

Initial vitals are significant for elevated blood pressure (currently hypertensive with initial reading of 160/100 mmHg), tachycardia (pulse rate of 110), marked tachypnea (respiratory rate of 26) and an oxygen saturation of 88% on room air (without supplemental O2).

Although the situation seems to be spiraling out of hand as the patient is quickly decompensating, it’s important to always return to the basics of airway, breathing and circulation.

This patient is in respiratory distress most likely due to running out of his home rescue nebulized medications, requiring the immediate administration of O2 via a non-rebreather mask at 10-15 L/min.

It’s important for EMS providers to use pulse oximetry to obtain a baseline O2 saturation on room air in order to trend the patient’s clinical course.

A 12-lead ECG is quickly performed revealing sinus tachycardia without any overt signs of ischemia or abnormalities. Prompt management and stabilization is essential in this patient as his declining mental status could be a direct manifestation of hypercapnia or hypoxemia.

After confirming the absence of allergies, the decision is made to administer 2.5 mg of albuterol sulfate solution (0.083%) in combination with 500 mcg of ipratropium bromide solution (0.02%) via a nebulizer that directly attaches to the non-breather. In COPD patients, studies have shown that a combination of ipratropium and albuterol is more effective than each agent given alone.1

The patient’s O2 saturation increases to 91% with moderate relief, decreasing retractions and reduced work of breathing; Wheezing and diffusively decreased breath sounds are still present in both lobes.

Upon re-evaluation, the patient continues to be very somnolent and thus not a candidate for continuous/bilevel positive airway pressure (CPAP/BIPAP).

Corticosteroid therapy is typically reserved for patients refractory to standard first-line bronchodilators and with impending respiratory failure.2 EMS providers are often left with a choice of dexamethasone or methylprednisolone without any evidence-based consensus on which drug is most beneficial.

To date, no trials have directly compared dexamethasone vs. methylprednisolone in the adult population. However, in pediatric patients, a recent meta-analysis purports the utility of dexamethasone as a viable alternative to prednisone/prednisolone therapy in patients experiencing an acute asthma exacerbation.3 Currently it’s unknown which patients may benefit most from intravenous administration of corticosteroids. Thus, in the absence of any contraindications, patients who present in severe exacerbations should receive systemic corticosteroids.4

The pathophysiologic basis for the use of corticosteroids in COPD/asthma exacerbations resides in their ability to reduce airway inflammation. The non-genomic anti-inflammatory mechanisms exerted by corticosteroids work rapidly (within minutes) making them an attractive option in severe exacerbations. Corticosteroids also have genomic mechanisms due to their lipophilic nature and ability to alter transcription of inflammatory mediators, however these aren’t of concern to EMS providers due to their delayed onset of action (approximately 4 hours). (See Table 1, p. 19.) 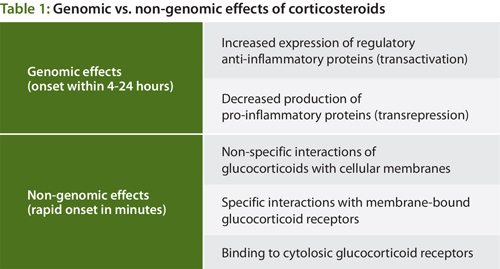 Deciding which agent to utilize in the emergency setting is patient specific and should be tailored to the patient’s co-morbid disease states. The unique mechanisms of methylprednisolone and dexamethasone in regards to their degree of anti-inflammatory activity and ability to bind to the cytosolic mineralocorticoid receptors (MR) is important for EMS providers to recognize when choosing an agent to administer.

Binding to the mineralocorticoid receptors leads to effects in the kidney that cause sodium retention and potassium depletion.5 These effects can have deleterious consequences in those patients who are already volume overloaded or very sensitive to alterations in sodium levels (i.e., hypertensive patients).Dexamethasone lacks mineralocorticoid activity, solely exhibiting anti-inflammatory effects, and thus doesn’t lead to any of the aforementioned side effects associated with binding to the MR.

This is an attractive option in patients with confirmed or suspected heart failure given dexamethasone’s lack of sodium retentive effects.6 In comparison, methylprednisolone has anti-inflammatory effects and noteworthy binding at the mineralocorticoid receptor.7 (See Table 2.)

Despite these differences in receptor binding between methylprednisolone and dexamethasone, the extent to which one dose of methylprednisolone significantly impacts cardiovascular outcomes secondary to MR binding is unknown in the overall clinical course of treatment.

Management of a severe case of COPD/asthma exacerbation involves the prompt administration of oxygen bronchodilators and IV corticosteroids with the ultimate goal of preventing respiratory failure.

A systematic approach by EMS providers is warranted when deciding which corticosteroid to administer (methylprednisolone or dexamethasone) as the initial choice of therapy can potentially impact the patient’s prognosis and need for intubation.

The greater potency, lack of mineralocorticoid effects, and longer duration of action (preventing the need for re-dosing in prolonged transportation) makes dexamethasone a seemingly superior option over methylprednisolone, however further studies are needed to confirm this hypothesis.

Overall, administration of either steroid will significantly decrease airway inflammation and until future studies are done to determine superior efficacy of one steroid over another, EMS providers shouldn’t hesitate to administer a potentially lifesaving treatment.