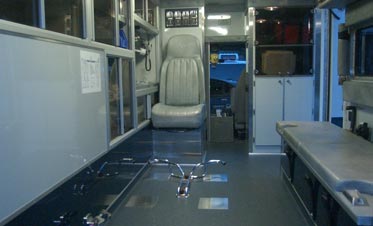 Mike Clark is a sector manager for an investment company that specializes in mutual funds. He arrives at work at 8:30 a.m. and spends his day on the telephone or watching one of the five screens that make up his computer monitoring system. He closely watches the Tokyo Stock Exchange and the Nikkei Average because many medical technology companies are based in Japan. Mike is an expert in evolving healthcare technology. He advises the fund manager as to which healthcare stocks they should buy and which they should not buy.

While he’s leaning back watching the screens, he hears the screeching of tires followed by a thud. He stops and immediately thinks to himself, “Sounds like an auto/ped.” He bolts to the window of his third floor office and looks down at the street. He was correct. A middle-aged man was struck by a car as he crossed the street. Mike can see the man on the ground. He can also see people, including a patrol officer, run to the aid of the injured man. Mike takes a closer look and thinks, “This is bad — really bad.” The victim, readily visible three-stories down, is unresponsive and starting to show some decorticate-like seizure activity.

A crowd starts to gather in Mike’s office. They look down at the scene and gasp at the carnage before them. Mike is surprised the ambulance arrives so quickly. They watch the ambulance crew assess the patient. Mike thinks to himself, “You guys better protect that airway.” The paramedics start asking bystanders about the accident. Mike, this time out loud, says, “Protect the airway guys.” His co-workers look at him funny and then look back down at the scene.

Finally, the crew appears to direct their attention to the airway. They open an airway kit while a supervisor who just arrived starts an IV. Mike watches with extreme interest. He thinks to himself, “They’re going to RSI him. Good idea. Better hurry.” Sure enough, the paramedics administer an induction agent. “Probably etomidate — maybe fentanyl”, Mike thinks. Then, the paramedics give the succinylcholine. Mike, under his breath, says, “Why didn’t you defasiculate him? Surely you got vecuronium down there.” One of his co-workers gives him a funny look again.

The patient is quickly intubated, packaged and transported. The event is over. All that is left are police officers interviewing bystanders and measuring distances. Mike’s co-workers slowly leave his office, talking amongst themselves about the poor man. Mike continues to stare out the window until the scene is clear and traffic is moving again.

Later, at the water cooler, Bill, one of Mike’s friends, strikes up a conversation about the wreck. Bill says, “Bad deal for that man, eh?” Mike says, “Yes, a really bad deal. It looked like he had a bad head injury.” For a moment, Bill looks perplexed. Then he says, “Oh that’s right, you used to be a paramedic. Aren’t you glad you outgrew that?” Mike thought for a minute and said, “I miss being in the field. If I could make a good living being a paramedic I would be doing it today.” Bill says, “You’re crazy Mike. What are you making? A buck-eighty, a buck-ninety?” Mike knows the local jargon. A “buck-eighty” is $180,000 a year and a “buck-ninety” is $190,000 a year. Mike says, “I’m doing all right. More than I ever could have made as a paramedic. But, there is more to life than IPOs and stocks. Some days I feel I am so removed from people — isolated.” Bill says, “Yes — like an animal in a cage.” Mike agrees, “Like an animal in a cage.”

That night Mike is quiet. He goes about the motions of life but appears distracted. His wife, Karen, notices. She asks him why, and he tells her about the call. She shakes her head and says, “Poor man. I hope he will be OK.”

Mike’s wife has always supported him in his endeavors, and he supported her in hers. During his senior year of college at Duke, while pursuing a finance degree, Mike took a community service elective where he rode with an ambulance service off and on for a semester. He was bitten by the bug. At that point, he knew two things. First, he wanted to graduate. Second, he wanted to be a paramedic.

He moved back to his hometown in another state and enrolled in EMT school. He did well in the class. In fact, he was valedictorian. He got a job with the local ambulance making $10.25 an hour as an EMT. Shortly thereafter he went to paramedic school. Again, he was class valedictorian and scored 100 on the National Registry exam. Mike was an excellent paramedic. He was quickly promoted to field training officer. People liked him, and he liked people. Karen, his high-school sweetheart, finally agreed to marry him. She had a good job managing an insurance agency. Despite the fact she made more than Mike, they were happy — he as a paramedic and she as a manager. They married.

Mike received several awards for his work and started teaching EMS at a local community college. But children soon came into Mike and Karen’s life. With them came new responsibilities and a new outlook on life. Karen’s salary continued to increase. Mike never made more than $35,000 a year despite a bunch of overtime. He was starting to see the writing on the wall. He said to his wife, “I have got to stop being selfish. I love being a paramedic, but now we have kids and a mortgage. I have got to do what is best for them. I have to find a job where I can support the family.” Besides, his mom and dad were giving him grief about being “an ambulance driver with a degree from Duke.”

Finally, Mike started to send out some resumes. Then one day, he got a call offering him an entry-level position with an investment firm. His starting salary was $108,000 a year with excellent benefits, a car allowance and a normal schedule. Mike went to the ambulance station, turned in his keys, said goodbye to everybody, and walked out the door and out of EMS. He never returned. Both EMS and society suffered a great loss the day Mike walked away. What is even sadder is that this same scenario is played out, day after day, across our great land. What a shame.