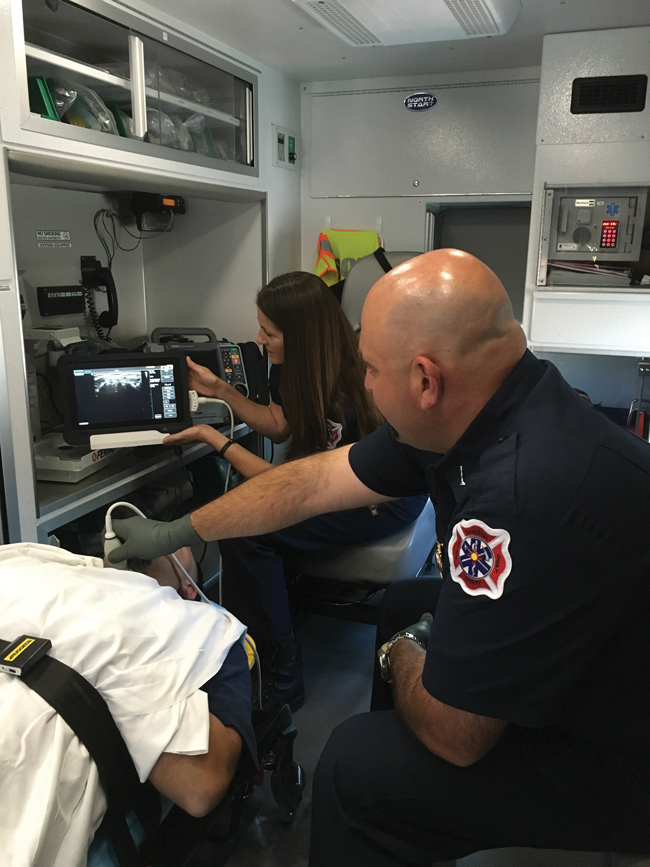 You’re dispatched to a 45-year-old male involved in a high-speed motorcycle accident. On scene you find the un-helmeted rider unresponsive with a Glasgow coma scale of 5 and significant facial trauma. The patient is breathing, but is in significant respiratory distress. You determine he’s unable to protect his own airway and begin to think about how to manage the airway effectively. You anticipate endotracheal (ET) intubation and bag-valve mask (BVM) ventilation will be difficult given his facial injuries, and mentally prepare for the possibility of needing to perform a cricothyroidotomy. Your extraglottic airway device and end-tidal carbon dioxide (EtCO2) detector are at the ready, but what else might help you successfully manage this likely difficult airway?

As this case illustrates, there are many challenges faced by prehospital providers when managing the airway of a critically ill or injured patient. It may have been months or even years since the last time you intubated a patient in the field, and many providers can go their entire careers without performing a cricothyroidotomy. These low-frequency, high-risk procedures can be anxiety-provoking even for experienced EMS providers. There’s no substitute for the clinical experience of performing these procedures and regularly engaging in high-fidelity simulation to maintain skill competency. However, point-of-care ultrasound is a valuable tool that can increase providers’ confidence when patients require advanced airway procedures.

Sonographic assessment of the airway can be performed prior to performing any airway intervention, during attempts at ET intubation, and for confirmation after securing the airway with an ET tube.

Ultrasound gel is applied liberally to the patient’s neck. This gel improves the quality of the image by eliminating any trapped air at the interface of the skin surface and the transducer, and creates a relatively frictionless surface on which the ultrasound transducer can move across the patient’s body. The long, flat, linear array, high-frequency transducer is applied to the trachea just above the top of the sternum in a transverse orientation with the probe marker pointing to the patient’s right side. (See Figure 1, below.) The esophagus is identified posterior and to the patient’s left of the trachea, and its concentric muscular layers are easily seen on ultrasound.

Figure 1: Proper positioning of the linear array transducer for
ultrasound guidance of an endotracheal intubation attempt. 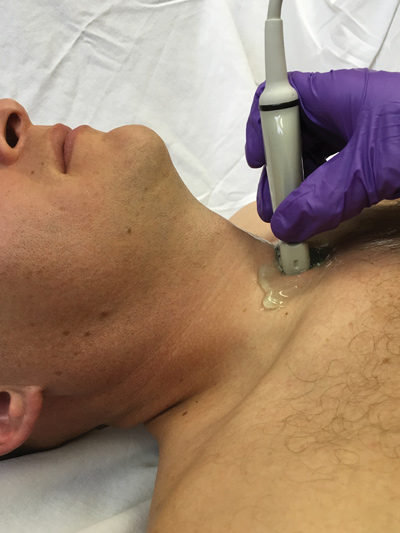 Because the esophagus is usually collapsed and doesn’t contain as much air as the trachea, passage of an ET tube into the esophagus creates a second air-mucosal interface posterior and lateral to the air-mucosal interface of the trachea. This “double tract sign” is much more readily identified than if the tube is placed within the trachea itself. (See Figure 2, below.) If this is observed by the provider performing the ultrasound, the intubating provider should immediately withdraw the ET tube.

Figure 2: The “double tract sign” seen when an esophageal intubation has occurred 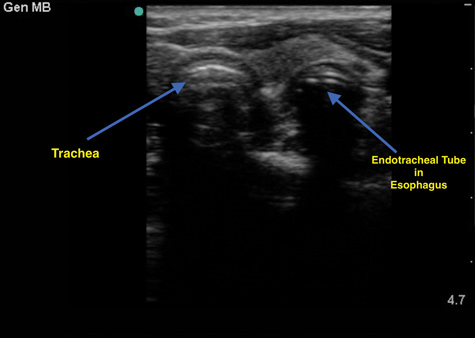 Note that there are two areas shadowing seen as the result of air-mucosal
interfaces: one in the trachea and one in the esophagus. Image courtesy Laleh Gharahbaghian

Ultrasound in the Age of EtCO2 Sampling

Unquestionably, the availability of continuous EtCO2 monitoring has revolutionized airway management safety.1 It’s the position of the National Association of EMS Physicians (NAEMSP) that in a patient with a perfusing cardiac rhythm, end-tidal capnography may be superior to other methods of ET tube positon monitoring, yet NAEMSP acknowledges that no method of tube position confirmation is 100% reliable under all circumstances.2 Obtaining a continuous end-tidal capnogram requires a cardiac monitor with such capability, which may not always be available to the out-of-hospital provider, particularly in austere settings.1 For patients in low-flow states such as cardiac arrest or severe shock, end-tidal capnography may be less reliable, as the lungs are poorly perfused in these conditions and carbon dioxide isn’t as readily off-loaded.3

One advantage to using ultrasound for tube confirmation is that if the ET tube is placed in the esophagus, this can be seen immediately, before any ventilations are administered and the stomach is insufflated.4 This may potentially decrease the risk for aspiration of gastric contents. The sonographer can provide real-time feedback to the intubator if passage of the ET tube into the esophagus is evident sonographically.

Ultrasound may be particularly helpful for intubation during cardiac arrest when an intubation attempt is made while chest compressions are ongoing. The provider performing the ultrasound can be positioned on the opposite side of the patient as the person performing chest compressions, and can serve as another set of eyes that provide guidance for the intubator, who will be attempting intubation under the difficult conditions posed by ongoing CPR.3 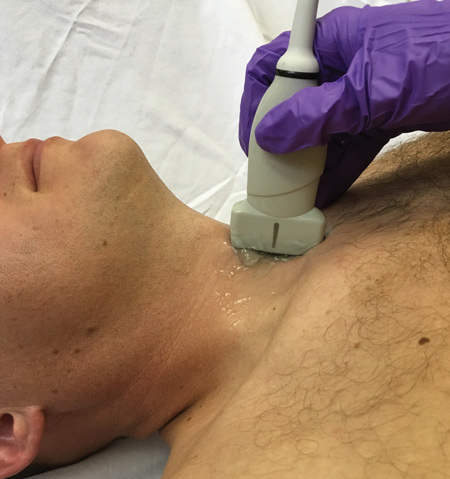 Similar to ultrasound for ET tube placement, a generous amount of gel is applied to the lower portion of the patient’s neck. The linear array high frequency transducer transducer is applied to the trachea just above the top of the sternum in the longitudinal orientation with the probe marker pointing towards the patient’s head. (See Figure 3, above.) It’s important for the transducer to be positioned in the midline. If a cervical spinal injury isn’t suspected, extending the patient’s neck will bring the laryngo-tracheal structures closer to the transducer and make them easier to visualize. The thyroid cartilage and cricoid rings are visible as discrete, hypoechoic structures, with the thyroid cartilage being larger than the cricoid rings and located the most cephalad (i.e., closest to the patient’s head). The air-mucosal interface is noted as a hyperechoic line just deep to the cartilages. The cricothyroid membrane can be identified as the space between the thyroid cartilage and the cricoid rings. (See Figure 4, below.) Once identified, the cricothyroid membrane is marked with a marker or pen so that it is easy to visualize once the transducer is removed from the neck.

Figure 4: Longitudinal view of the anterior neck on ultrasound 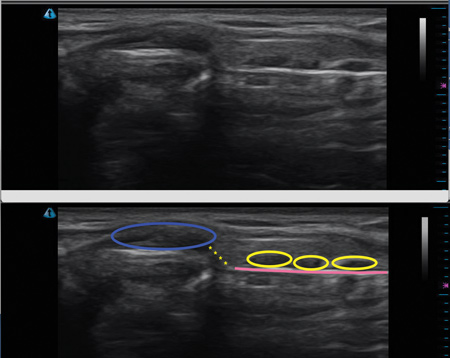 The thyroid cartilage (blue oval) is noted as the largest of the cartilaginous
structures. The cricoid rings (yellow ovals) are smaller and further
away from the patient’s head. The air-mucosal interface of the trachea
(pink line) is seen as a hyperechoic line just deep to the tracheal rings.
The cricothyroid membrane (yellow asterisks) is located between the
thyroid cartilage and the cricoid rings. Image courtesy Jenna M.B. White

Placing an ET tube between the vocal cords is only one facet of airway management. A successfully managed airway prevents or minimizes hypoxia, facilitates adequate gas exchange during attempts, secures the airway against the threat of aspiration and provides a reliable conduit for assisted ventilations.

Negotiating a difficult airway is one of the most stressful situations an EMS provider can encounter, yet it’s also an instance where a clear, stepwise approach can lead to improved patient outcomes. Using ultrasound to assist with identification of ET tube placement and cricothyroidotomy can inspire added confidence during these difficult clinical encounters.