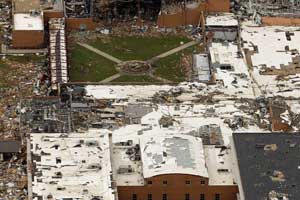 The tornado that tore through Joplin Mo., on May 22, 2011, killed 165 people and injured 1,500 others; it decimated thousands of homes, business, churches, nursing homes and St. John’s Mercy Hospital–one of the town’s two hospitals.

It received international attention for weeks. Much of the attention centered on the many lives lost at one of the nursing homes and St. John’s. Many of the media stories focused on heroic civilian efforts, including road crews that cleared the road early with chainsaws and assisted citizens and firefighters in finding and extricating trapped individuals.

But like so many other disasters, the efforts of the local and mutual aid EMS agencies, which found, triaged, treated and transported scores of injured to medical facilities throughout a 12-hour period after the tornado, went largely ignored by the national media. So when Jason Smith, director of Metro Emergency Transport System (METS), and Rusty Tinney, director of the Newton County Ambulance District (NCAD), invited me to meet with the crews and supervisors and speak at a staff picnic on the first anniversary of the tornado, I accepted immediately.

METS and NCAD cover the Joplin area in a unique and cooperative response system (see Last Word, p. 90). Many of the region’s EMS, fire personnel and emergency department nurses work for one or both agencies.

I arrived in Joplin the day after President Barack Obama’s speech at the Joplin Community College and was not at all surprised to learn that the elected officials, fire crews and law enforcement staff were allowed into the facility, but the EMS crews, the ones who would be able to contribute the most if the president or another attendee collapsed during the ceremony, were stationed outside the auditorium at their nine ALS units.

It’s a common story that stinks and will probably only change when an elected official chokes to death on a martini olive and it takes 12 minutes for a crew to get to that person’s obstructed airway.

The community college, METS and NCAD are an important part of the Joplin tornado history because the tornado tore through the center point of their two primary response districts and dozens of the emergency personnel were at the community college instead of Joplin High School, which was not large enough to hold the high school’s graduation, when the tornado tore through the high school, hospital and their homes minutes after graduation ceremonies had concluded.

What follows are photos from that fateful day and my visit. I hope they show you the unimaginable obstacles the METS and NCAD EMS crews faced and how they have rebounded, physically and emotionally, in the year since that horrible day.