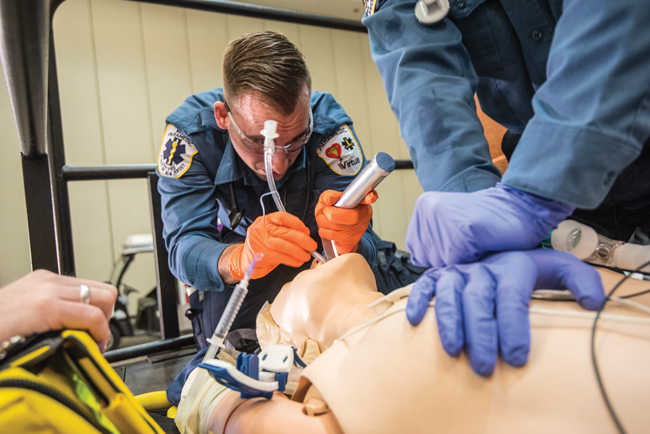 There’s one specific psychomotor skill that still carries more clout than almost anything else in EMS. It’s the skill that’s too often used as a means of measuring adequacy, expertise, competence and ability: endotracheal intubation (ETI).

As a profession, EMS affords ETI some bizarre form of idolatry. The ability, opportunity and permission to place a piece of plastic into someone’s mid-trachea is, for whatever reason, considered the gold standard of practice.

The actual skill itself can be successfully performed in a few simple steps, but it’s by no means easy. After all, there are a host of circumstances that make ETI an extremely tenuous and sometimes treacherous maneuver: patient condition, anatomy, secretions, provider experience, environment, induction-agent access/selection, etc.

When we’re able to overcome all of these factors and successfully take control of and protect a patient’s airway, there’s certainly a well-deserved sense of accomplishment in that. But if we think of ETI in terms of its context, not just its execution, it’s fair to assume that the esteem comes more from the situations surrounding the actual skill, rather than the actual intubation itself.

The authority that this skill affords us is very powerful, and the public and medical community trusts us with this power. But with such power comes even greater responsibility. As such, it’s important that we’re armed with tools to help us recall proper ETI procedures and facilitate successful tube placement. But our job isn’t done once the ET tube is in place; if anything, it’s only just beginning. Most patients don’t suddenly become better–a great number of them will become sicker and continue to deteriorate if left unchecked.

The reasons a patient may warrant intubation can vary greatly, especially if you consider the many situations in which it’s performed.

Elective intubations are performed in patients who have no immediate life threats surrounding the need for intubation (e.g., patients who are heading into surgery). Other considerations might be associated with a patient’s anticipated clinical course–when there’s a high degree of certainty that future conditions will likely warrant emergent ETI due to disease progression (e.g. the burn patient who’s in no acute distress, but whose voice is hoarse–a process that’s likely to progress to acute and irreversible airway obstruction).

Emergent intubations are performed when the inability to immediately secure the airway poses a real life threat to the patient. There are several overarching pathways the can lead to the need for emergent ETI:

2. Compromised airway integrity. These are almost always trauma patients who’ve sustained some form of injury to their airway. Many times the anatomy is distorted to the point that patency is no longer preserved.

3. Respiratory failure. These patients warrant intubation for the purposes of mechanical ventilation and advance respiratory therapies not available via noninvasive means.

The recognition of the need for emergent ETI, development of the care plan, successful deployment of the maneuver, and aggressive follow-up care should be a mainstay of paramedic practice, and the entire course of events should be frequently practiced in robust, high-fidelity simulation.

Within the context of emergent ETIs, it’s worth considering how one pharmaceutically achieves the best conditions for a successful intubation. The amount of medications, combinations and opinions is extensive. However, there’s a fair amount of nuance involved in making the right choices. For the very vast majority of prehospital intubations, it’s likely in the best interests of our patients that they be sedated and paralyzed via rapid sequence intubation (RSI). RSI provides the best conditions to ensure the first intubation attempt is the best intubation attempt. At a minimum, the patients should be induced with a rapidly acting sedative and paralytic. Medications in which the intended effects rapidly wear off also provide the added benefit of early reassessment and reversal of complications such as cardiovascular compromise, for example.

ETI is prone to a lot of complications. We shouldn’t take lightly the ramifications of completely changing a person’s respiratory physiology.

There are two relatively common, but extremely serious complications that tend to plague prehospital ETIs: 1) Unrecognized or misplaced attempt; and 2) post-intubation hypotension.

The most dangerous intubation complication is a misplaced ET tube and its subsequent failed recognition. This catastrophic complication means all but certain death for these patients, but the synergistic combination of technology, planning, and sound clinical judgement can effectively eliminate this from occurring.

Providers must have access to tools that enable and empower their success. If nothing else, all providers afforded the skill of prehospital ETI must have access to end-tidal carbon dioxide (EtCO2) waveform capnography. Not only is this a valuable diagnostic tool, but it’s the definitive and objective standard for placement confirmation.

Video laryngoscopy is also evolving into a standard of practice. There’s now little doubt that video laryngoscopy provides much better first-attempt success rates than that of direct.1 As the technology becomes more affordable and available, all providers must be afforded access to this technology.

The most critical component of the entire ETI process is planning. ETI is a skill that demands providers to aggressively plan for the ensuing series of events. It’s certainly well understood that a large majority of the ETI attempts that go awry have been as a result of “failing to plan for failure.”2

One of the greatest resources to aid in planning is the use of a pre-intubation checklist. Checklists can help to account for holes in human judgement that can result in error and subsequent patient harm.

Let’s quickly consider one of the most common arguments against the use of checklists: “We don’t have time to use a checklist. This is an emergency!”

Many of the risks associated with ETI are due to the uncontrolled environment in which it’s performed. Patients emergently intubated outside of the operating room, where ETI is performed under the guidance and expertise of anesthesiologists, are much more likely to suffer post-intubation cardiac arrest.3 A significant amount of this lack of control can be accounted for with the use of ETI checklists, which not only provides useful algorithms for difficult airways, but also the necessary steps to plan for subsequent complications.

As providers performing one of the most critical skills in all of emergency medicine, and doing so in a completely uncontrolled environment, we must do everything within our power to ensure that our first ETI attempt is our very best attempt. With each failed attempt, the likelihood of success precipitously falls,4 while the incidence of adverse events rises at an alarming rate.5 Video laryngoscopy and pre-intubation checklists are great tools in the “make your first attempt your best attempt” paradigm.

The development and persistence of PIH has both a causative and associative effect with the volatility of critically ill patients. It can worsen a patient’s condition and outcome in many of the disease processes requiring the need for emergent airway control. For instance, in hyperacute cerebrovascular accidents, patients who suffer even a transient and minimal decrease in blood pressure experience significantly increased mortality.7 In traumatic brain injury patients, a single episode of hypotension can increase mortality by 120%.8

Patients in the prehospital setting who require emergent ETI usually have several issues simultaneously threatening the onslaught of sudden cardiovascular collapse. Many of them lack the physiologic reserves necessary to mount a defense against vital sign derangements.

This lack of reserves is complicated by drugs used during ETI induction, which can cause significant decreases in vascular tone. Once blood begins to pool in the periphery, afterload and preload are greatly reduced, leading to a further decrease in cardiac output. Positive pressure ventilation increases intrathoracic pressure, which then impairs the ventricular filling capacity and further decreases cardiac output.

Once this self-perpetuating cycle starts, it can be a handful to manage. However, if planned for and rapidly treated, PIH can be quickly reversed before it progresses to refractory cardiovascular collapse.

Shock index (SI) can be used as a down-and-dirty way of deciding whether or not to do battle with PIH.6 It’s certainly not a perfect tool, but it’s easy to use and will give a basic picture as to whether or not you’re going to need to keep an eye out for PIH. In patients with a SI > 0.7, PIH is likely. For any patient requiring ETI with a pre-intubation SI > 1.0, it’s best to have an antihypotensive agent (vasopressor) immediately available post-intubation.

Use of a vasopressor in addition to volume resuscitation as indicated, is the preferred immediate treatment for PIH.9 But the availability of premixed vasopressors is typically quite limited in the prehospital environment. Although mixing your own vasopressor infusion may be an option, it can delay treatment and lead to rushing, which is dangerous. These antihypotensive medications are critical-check drugs that require you to double- and triple-check your processes and dosages. (For more from the author, read Pressed for Time: Use of antihypotensive medications in patients suffering from end-organ hypoperfusion, in our September 2014 issue.)

A better way to deploy antihypotensive drugs that affords providers the time to accurately mix the infusions is using push dose vasopressors, which are becoming increasingly accepted and documented. The push dose vasopressor may be able to buffer the hypotensive effects that ETI induction agents tend to have on critically ill patients. Additionally, using push dose vasopressors as a temporal bridge to an antihypotensive agent infusion is no less effective or beneficial than having the infusion immediately available.10 Considering the extreme detriment that PIH has on end-organ perfusion and injury, deploying this therapy significantly improves patient outcomes. (For more on push-dose pressors, read Push Dose Epinephrine: A temporizing measure for drugs that have the side effect of hypotension, by William Selde, MD, in our September 2014 issue.)

Keep in mind, PIH can be persistent and refractory to time and fluid resuscitation. Any hypotension that lasts or is expected to last more than 10 minutes should be attacked with judicious but aggressive antihypotensive administration.

Prehospital ETI is almost always emergent and executed with the intention of saving a patient’s life. Thus, the benefit of ETI must always outweigh the risks, which can be reduced if equipped to do battle with the many complications of ETI. Converting a patient from negative pressure ventilation to positive pressure ventilation is a decision with both great benefit and great risk. Further complicating matters is the fact that these risks are compounded by the brittle nature of our critically ill patients.

Planning may be the most crucial component. These scenarios are complex and are complicated by an overwhelming amount of extraneous details that can lead to catastrophic failures. Being diligent about the utilization of checklists while thoroughly ascertaining the entire clinical picture will greatly ensure you’re able to prevent the most common and deadly of ETI complications.

3. Mort T. The incidence and risk factors for cardiac arrest during emergency tracheal intubation: a justification for incorporating the ASA Guidelines in the remote location. J Clin Anesth. 2004;16(7):508—516.

“¢ Gawande A: The checklist manifesto: How to get things right. Metropolitan Books: New York, 2009.

>> Differentiate between emergent and elective intubation, and understand why emergent intubations should be the mainstay of prehospital practice.

>> Plan for common complications experienced during prehospital intubation, and evaluate treatment options best suited for each.

Elective intubation: Intubation utilized for an end that’s not immediately tied to the patient’s current clinical situation or condition.

Emergent intubation: Intubation utilized in situations where a patient’s clinical condition and possibly livelihood depend on rapidly and definitively securing the airway.

Shock index : An assessment tool defined as the ratio of heart rate to systolic blood pressure with a normal person’s shock index falling between 0.5—0.7.