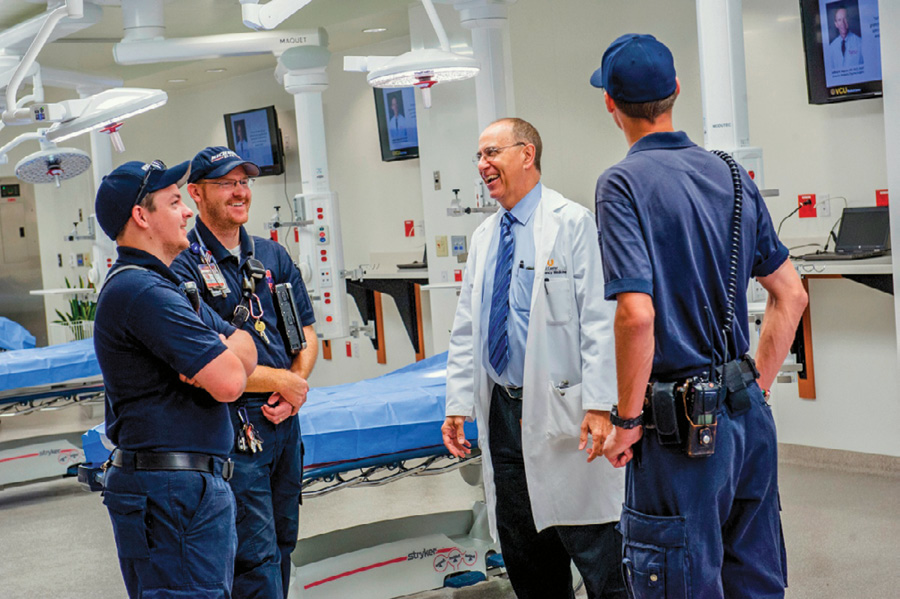 My personal experience with ED ECMO

What does it take to save the life of someone who’s in shock and suffering from an acute massive pulmonary embolism? The answer is a comprehensive system of medical care that starts in the field with well-trained providers and is seamlessly backed up by hospitals that can provide highly sophisticated treatments that can now be started in the ED.

As a cardiologist and the operational medical director for the city of Richmond, Va., and the surrounding Henrico County, I’ve had the privilege of helping to develop a comprehensive, regional system of care.

In this article, I’m going to use my own personal, near-death experience to illustrate how an integrated emergency healthcare delivery system can dramatically change the odds of survival.

In Fall 2014, despite a lifelong uneventful medical history, a large stone was found in my left kidney on a routine X-ray. Laboratory tests showed it was beginning to affect my kidney function, so a plan was devised to remove it gradually by monthly, one-hour lithotripsy treatments that use shock waves to break up kidney stones without surgery.

After the procedure, the tiny pieces of stones pass out of your body in your urine. The procedure is performed under light anesthesia and is generally quite safe. However, like many surgical procedures or traumatic injuries, there’s a small risk of blood clot formation in large leg veins.

My first five procedures were totally uneventful with the stone gradually becoming smaller and smaller. However, three days after the sixth procedure, I began to feel increasingly short of breath on exertion.

Initial tests, including a CT scan, were negative. However, the following morning while alone at home (my wife, who’s also a physician, had already gone into work at the hospital), I suddenly became breathless and felt like I was going to pass out.

As I got myself safely to the floor, my immediate self-diagnosis was that I’d just suffered a massive pulmonary embolism, since I was only mildly tachycardic, had no chest discomfort, but simply couldn’t breathe.

My first thought was to dial 9-1-1, which would get one of my Henrico Fire crews to my house within minutes. I quickly realized, however, that although 9-1-1 was the immediate priority, the odds of surviving a massive pulmonary embolism with conventional treatment (i.e., heparin, clot-buster drugs like tPA) provided in the nearest community hospital ED would be slim. I thought my only chance for survival would be to get transported to the ED at Virginia Commonwealth University (VCU), where I work, so I could be put on extracorporeal membrane oxygenation (ECMO) life-support immediately and then brought to the operating room to have the clot removed.

At the time, VCU-the tertiary academic medical center for the region-was the only facility capable of, and experienced in, providing this level of care. The problem was that VCU was 25 minutes away, with several community hospitals reachable in half that time.

Without hesitation, I speed-dialed my wife on the cellphone in my pocket and managed to communicate what I needed. She dialed 9-1-1 in the city and got transferred to Henrico County 9-1-1, which dispatched a fire paramedic crew. She also arranged for ECMO to be set up in the ED and blocked a cardiac OR.

A few minutes later, the paramedic crew was able to gain entrance to my house by entering the digital code for the back door electronic lock that my wife relayed to them. They found me on the kitchen floor still conscious, short of breath, cyanotic and in shock.

I was able to convey to the crew captain what was wrong and convey to him that I needed to be transported immediately to VCU so I could be put on ECMO in the ED.

He thought for a few seconds and reluctantly said, “Doc, I hate to tell you this, but you look really bad, and, based on regional EMS protocols you medical directors write, I’m required to bring you to the nearest hospital.”

I replied, “You can’t do that or I’ll die, because VCU is the only facility in the region that can put me on ECMO in the ED and take me to the OR immediately.”

After a quick pause, the crew chief looked at me and said, “So, Doc, as my medical director are you giving me a lawful order to bypass several closer hospitals to go to VCU?”

I said, “yes,” and that was the last thing I remember until several days later when I woke up in the cardiac surgical ICU (CSICU) at VCU.

What I later learned is that I remain conscious and able to answer questions appropriately during the rapid transport to VCU.

Upon arrival, a quick look at my echocardiogram confirmed my right ventricle was dilated with a large clot in the main pulmonary artery. The ECMO team was there (“gowned and gloved”).

As soon as rapid-sequence intubation (RSI) drugs were injected and I was intubated, my feeble pulse disappeared and the race was on.

I received several minutes of chest compressions while the ECMO lines were being inserted. Once in place, the ECMO system was turned on and I “pinked up.”

I was given heparin and tPa and brought immediately to the OR, where two large clots the size of golf balls were removed from my pulmonary artery.

Within two days I was extubated, hemodynamically stable and fully alert in the CSICU. The day I was extubated, my wife told me the paramedic crew captain who brought me in was very concerned that he might be “in trouble” because they didn’t intubate me en route to the hospital.

I said, “If he had done that, I wouldn’t be alive,” and then asked her, “Please see if you can ask him to stop by so I can tell him why attempting to intubate me in the field would have been lethal.”

That evening I had the pleasure of thanking the captain for helping to save my life. I explained to him that, based on our experience placing a number of massive pulmonary embolism patients on ECMO, we’ve found that cardiac arrest with pulseless electrical activity is common and should be expected as soon as RSI drugs are given to a massive pulmonary embolism patient who’s in shock.

The reason is that the drugs will dilate the large veins entering the heart, decreasing the right ventricular (RV) filling pressure. Since the right ventricle is typically dilated and pumping as hard as it can to squeeze blood by the obstructing blood clots in the pulmonary artery, the sudden drop in RV filling pressure and venous return causes a catastrophic drop in blood flow resulting in cardiac arrest.

Once the captain understood he wasn’t in trouble and had done exactly the right thing, I asked him, “So, why didn’t you intubate me even though your protocols would’ve allowed you to do so?”

He answered, “Because, despite the fact that I couldn’t even get a blood pressure on you, you were able to answer my questions coherently all the way to VCU.”

That, my friends, is known as medical judgment and is the mark of a highly competent, experienced provider. Protocols are like a cookbook, but they must be applied by a thinking cook.

Fortunately, my recovery was swift. I was back at work full-time within six weeks and running two miles a day without difficulty several weeks later.

Aside from delaying attempts at intubation, if possible, until a massive pulmonary embolism patient who’s in shock is in an environment where the patient can be quickly placed on ECMO if they arrest, my case highlights what’s now possible in a handful of communities that are providing similar capability.

In the two days I was in the CSICU on a ventilator, our VCU team placed two more massive pulmonary embolism patients on ECMO and performed an emergency surgical embolectomy. Both were pregnant women in their third trimester who suddenly became severely short of breath and hypotensive. An emergency Cesarean section was performed at the bedside on each of them as they were being put on ECMO.

Table 1: When to suspect a massive pulmonary embolism 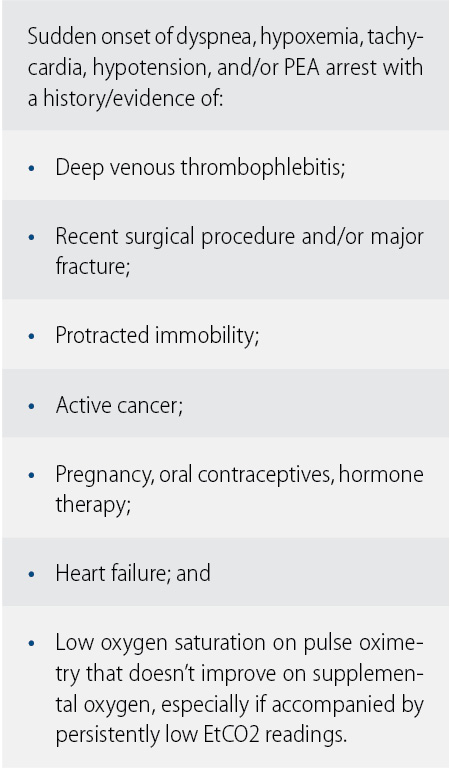 Table 2: Wells’ score for estimating the probability that a patient’s acute symptoms might be caused by a pulmonary embolism1 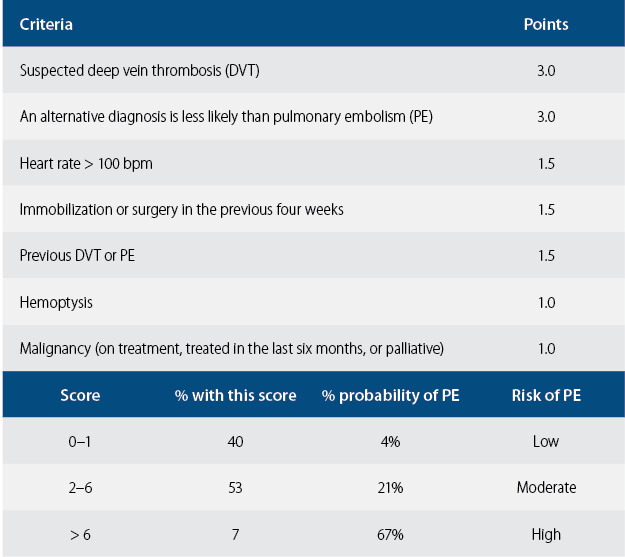 A simple scoring system has been developed to aid practitioners in estimating the likelihood that a patient’s acute symptoms might be due to a pulmonary embolism.1 (See Table 2.)

Other important elements of our EMS system now include regional EMS protocols for identification and triage of patients to an ED/ECMO-capable receiving hospital.

Our current selection guidelines for ED ECMO, which include selected witnessed out-of-hospital cardiac arrest patients, as well as those with suspected massive pulmonary embolism, are shown in Table 3.

At VCU, we have a well-established Pulmonary Embolism Response Team (PERT), as well as an ECMO alert team capable of assembling a multidisciplinary specialty team at the patient’s bedside in the ED or in hospital 24/7 within minutes.

Over the last five years, we’ve placed more than 500 patients on emergency ECMO (approximately 2-3 in the ED per month). Our options for clot removal have broadened, with fewer patients requiring surgical embolectomy and more patients being treated using pharmacologic and interventional radiology clot removal procedures. 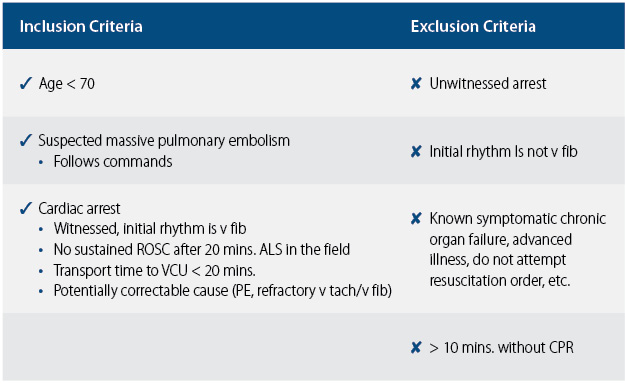 In addition to specialized portable equipment and in-house perfusionists, a hospital needs to provide this level of care frequently to maintain proficiency. For massive pulmonary embolism and qualifying cardiac arrest patients, the odds of surviving neurologically intact decrease rapidly from the time of arrest until ECMO perfusion is in place.

So, as in many things in emergency care, time is the enemy and an effective system must consistently win the race against time.