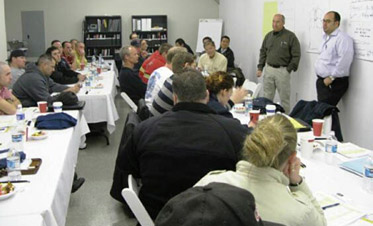 I had the rare opportunity to sit in on the start of a revolution in late January when I was invited to observe a planning process at 5.11 Tactical in”žModesto,”žCalif. It wasn’t the type of revolution you normally think of, involving the overthrow of a government, but rather a revolution that will change the way you think about uniforms and gear in the future.

For the past 30 years, law enforcement and military personnel worldwide have been wearing 5.11 Tactical clothingÆ’both on and off duty. But, after deciding to launch a new line of EMS and fire-service uniforms and gear, 5.11 Tactical CEO Dan Costa invited 50 representatives from EMS and fire agencies from throughout the”žU.S. to spend two 12-hour days at the company’s headquarters, and asked them to bring along their current uniforms and gear (including radio equipment).

In addition to his energetic and innovative core staff and regional sales representatives, Costa also flew in multiple representatives from each of the clothing and materials manufacturing partners from throughout the world.

As soon as I heard the company’s mission statement, I knew exactly what I, and the consumers, were going to get:At 5.11 Tactical, we create products that exceed the needs of our customers with functional innovation while delivering exceptional value. But it was during the planning process that I was able to watch Costa and his team really work their magic.

I watched in amazement as Costa and 5.11 President Francisco Morales, personally led the process, asking the public-safety representatives not only what they needed and what they wanted, but”žhow much they thought they should be paying for each item. Most impressive was the fact that Costa and Morales made pricing and design decisions right on the spot, promising special material capabilities and treatments, custom embroidery, silk screening and the addition of a myriad of special features the group requested.”ž

Company History
The company’s seven-pocket pants, with slash pockets and their patented tactical strap, have become legendary in the law-enforcement community because of their comfort and functional design. The pants, originally designed as climbing apparel by famous rock climber Royal Robbins, were first developed by Susie Tompkins, founder of clothing giant Esprit, and sold through Royal Robbins Clothing.

When Royal Robbins Clothing was struggling to survive, the Robbins family hired CostaÆ’a gifted entrepreneur with a knack for transforming declining companies into prosperous businessesÆ’as a consultant. Costa eventually purchased Royal Robbins and, by applying key business principles from his successful track record that included 25 years in the restaurant and food-processing industries, soon transformed the company into the black by working directly with factories, involving workers in design and development, finding direct sourcing and cutting out middlemen.

Shortly after Costa bought Royal Robbins, he met with the company’s largest customers and one quickly stood out: the”žFBI”žNational”žAcademy in”žQuantico,”žVa. Ë™Our only law enforcement customer was looking for more products from us,à“ he says. Ë™In addition to the 5.11 Tactical pants, the Academy needed other specific products and asked us if we would be interested in producing them.à“

The FBI wanted tactical vests and a tactical shirt to go with the pants,à“ says Costa. So he took good care of his client and facilitated the academy’s needs. The company’s law-enforcement clothing line then became very successful, very fast. In 2003, Costa sold Royal Robbins and founded 5.11 Tactical Inc. to zero in on the public safety market. Through perseverance and astute business acumen, Costa achieved rapid success with 5.11.”ž

The Ë™5.11à“ is a reference to the Yosemite Decimal System rating for the highest level of difficulty that can be achieved in rock climbing. The word Ë™Tacticalà“ refers to the company’s tactical approach to designing its products, much the same way”žEMS, fire and law-enforcement agencies develop a tactical action plan at major incidents. Costa illustrates the highly strategic and tactical aspects of the clothing business by noting that there are 40 critical measurements 5.11 pays close attention to on each pair of pants it makes.”ž

Costa also believes his clothing and gear should be comfortable, reliable and fairly priced. So while Royal Robbins’ 5.11 pants sold for $60 in 1999, today, Costa sells those same pants with improved quality and more features through 5.11 Tactical for just $39.99.

A key to 5.11 Tactical’s success has been their willingness to ask their customers what they need and what they want each product to do. Then they design them in accordance to the feedback and find the right sourcing so they can offer high quality at a great price.

Addressing the Special Needs of Our Industry
When personnel involved in our planning sessions pointed out the need to keep a particular radio harness (worn over their shoulder) from moving around, Costa called his manufacturing consultant to the front of the room and had him design an extra loop over an existing belt loop where personnel can tether their radio and solve the problem.

And when EMS personnel presented special needs regarding diagnostic equipment and accessories, Costa and his team agreed to expand pants pockets to allow”žEMS providers to store their stethoscope, and also add dividers in leg pockets for easy access to trauma shears, small flashlights, knives and other gear.”ž

But, as impressed as I was with the planning process, I was even more impressed with the quality and durability of their products. As illustrated in Photos 3AàC, the company has designed padded knee inserts for their pants worn by crews that spend a lot of time treating patients at ground level or checking equipment. They also construct the seat of their pants with two layers of material, double-stitch key areas, place functional pockets at the proper positions and angles, and incorporate elastic waistbands that allow the pants to move with the rescuer. Many of the 5.11 shirts feature built-in openings and loops that will hold remote microphones, pens and sunglasses.

By delivering exactly what their customers want, 5.11 has mushroomed into an innovative company that now manufactures an amazing array of items for all levels of public safety, including uniforms, footwear, 5.11 Undergear, gloves, watches and fire-resistant clothing. The challenge for 5.11 will be moving into an industry that has historically been slow to embrace change.

Samples of 5.11’s new EMS and fire clothing and gear will be shown at the Fire Department Instructors’ Conference (FDIC) in April in”žIndianapolis, and the company will roll out their new line in July. Watch for this new line at FDIC, in the pages ofJEMS andFireRescue and atwww.511tactical.com. And look for more company reports as I hear about, and attend, other opportunities for providers to have direct input into product designs.