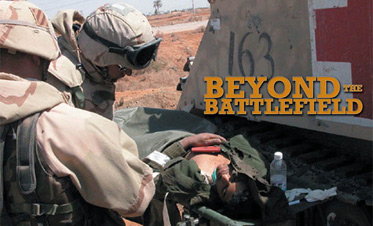 Your BLS ambulance is dispatched for a hunting accident in a rural area. You and your partner arrive on scene to find that the patient is a 50-year-old male bleeding uncontrollably from the right side of his groin due to a rifle injury. He_s conscious and alert upon arrival; however, he_s tachycardic and hypotensive from continuous blood loss. You apply gauze and direct pressure to the wound and decide to immediately transport this patient due to significant blood loss.

Despite continuous direct pressure and pressure over the femoral pressure point, the bleeding continues. Your partner suggests a tourniquet, but the wound is high in the groin, and it_s impossible to get a strap above the bleeding site. What_s your next move?

Overview
One of the greatest threats with traumatic injury is massive bleeding (1). The basics of hemorrhage control continue to be direct pressure and ultimate surgical control. However, even with experienced providers, many patients still die of unrelenting hemorrhage.”ž

In the military setting, where hemorrhage accounts for approximately 50% of all combat fatalities, adjuncts to direct pressure in the field include tourniquets and new hemostatic dressings. These adjuncts have proven invaluable for treating severe hemorrhage in soldiers injured during operations in Iraq and Afghanistan (2).

As of January 2008, 3,905 U.S. soldiers have been killed and 28,822 seriously wounded in Operation Iraqi Freedom alone. Combat wounds are often devastating and associated with massive tissue damage. New hemostatic dressings were specifically developed to address these types of wounds, taking into consideration the environment where they would be used.

In the U.S., however, where many trauma fatalities are also the direct result of exsanguination, there has been little change in hemorrhage control protocols that most often include only direct pressure and standard dressings. The success of these new hemostatic dressings on the battlefield should prompt all EMS agencies to consider their use in civilian practice.”ž

Several similar dressings have been introduced during the past few years that have shown promise. All of them are bulky and serve to fill the space of large wounds. Most of the agents absorb water in some capacity, acting to concentrate the clotting factors in the blood and aid clot formation. Some of the most advanced dressings are engineered with human coagulation factors implanted into the dressing to promote fibrin formation, the last step in clot formation. The variation among available products lies in their substance (granular or solid), size and flexibility.”ž

The ideal hemostatic agent would require little to no training, be in a pre-mixed, non-perishable state and have the ability to effectively control hemorrhage from any source. In addition, advantages would include being inexpensive, posing no risk to life or limb, and remaining stable and functional at extreme temperatures.

Currently, no single product meets all of these ideals; thus, the decision to use one product or formulation over another is an art as much as a science. The vast majority of these dressings are FDA approved as over-the-counter agents for external use. The following is an overview of the most commonly used products and formulations and their applications.

QuikClot
One of the longest on the market, QuikClot from Z-Medica is a mineral zeolite powder with a three-dimensional structure similar to a honeycomb that allows it to sift molecules by size. When QuikClot comes in contact with blood, it preferentially takes in smaller molecules (i.e., water), leaving the larger clotting factors and platelets behind in the wound (3). This results in a highly concentrated form that promotes coagulation.

QuikClot has been FDA approved under a few different formulations to be externally used to stop moderate to severe bleeding. The initial product showed reasonable promise for hemorrhage control, but several factors limited its application for day-to-day use. The most significant of these problems was an exothermic (heat-producing) reaction that occurred with its application. The temperature rise was significant enough to result in a burn-like injury to surrounding tissue about 2% of the time. Additionally, the original formulation was a granular powder that was difficult to handle and remove surgically once hemostasis was achieved.

In 2005 and 2006, Z-Medica re-engineered the product and introduced new formulations that addressed these problems. The new QuikClot 1st Response and QuikClot ACS+ are no longer associated with any significant exothermic reaction and allow for easier application and removal. One published study demonstrated the efficacy of the new formulations (4).

The product is currently used in combat operations, specifically with the U.S. Army, Navy, Air Force and Marine Corps. For civilian use, the product is packaged in several forms: QuikClot 1st Response is available in three sizes (25-, 50- and 100-gram sponges) designed specifically for EMS/first responders. QuikClot Sport and Sport Silver are over-the-counter versions being marketed to non-medical personnel.”ž

The advantage of the new QuikClot ACS+ formulation is its ability to fill large wounds and cover large surface areas. It doesn_t work well for small, deep wounds, such as small-entry penetrating wounds. In the personal experience of the authors, the products have been easy to use and remove during surgery and showed no heat production.”ž”ž

HemCon
An engineered chitosan preparation derived from Poly-N-acetyl glucosamine, HemCon from HemCon Medical Technologies is biodegradable and non-toxic. Chitosan has been shown to have mucoadhesive properties that make it an ideal hemostatic agent. The HemCon dressing is a freeze-dried chitosan dressing, designed to optimize the mucoadhesive surface density and structural integrity of chitosan at the site of the injury.”ž

Essentially, the bandage works by becoming extremely sticky when in contact with blood. The adhesive-like action seals the wound and controls the bleeding. The chemical makeup of the dressing, with its positive charges, attracts negatively charged red-blood cells. These cells create a seal as they_re drawn into the bandage, forming a tight adherent clot (5).

It first gained FDA approval in 2003, and its use has subsequently been reported mostly in the military, with more than four years of proven combat experience. The largest experience noted in the literature reported a 97% success rate at controlling bleeding on human subjects (6). A 2006 study recommended that HemCon be Ë™the first advanced hemostatic dressing used in situations in which severe external bleeding can_t be controlled by standard methods.à“2 Animal studies don_t necessarily support this success rate, and some dressing-to-dressing variability has been suggested.

The bandage is intended as a topical dressing for local management of bleeding but can be used temporarily for severe bleeding of surgical wounds and traumatic injury. The dressing shouldn_t be left in place longer than 24 hours. The bandage appears to be stable at extremes of temperature and doesn_t require special preparation or significant amounts of training for its use. There have been no known allergic reactions attributed to the dressing.

One of the authors has had significant experience with the product in combat care and feels it provides good hemorrhage control in large, open wounds. The material is inflexible, and thus the main disadvantage is difficulty using it in deep, narrow wounds.

In 2006, to address harder to reach, narrow wound track bleeding, HemCon released ChitoFlex, a stuffable, flexible dressing that can be torn or folded. In 2007, HemCon also released a more flexible, enhanced HemCon Bandage line to meet the needs of more narrow wounds.

Celox
From SAM Medical Products, Celox is another chitosan product that_s one of the newer hemostatics on the market. There have been no published reports to date on human use, but a live-tissue study and animal trials reported by company literature show promise. The material appears to control major arterial bleeding, doesn_t generate heat, can work at temperature extremes, is lightweight, portable and easy to administer without specialized training. The product comes in granular form that_s poured over the bleeding site where it gels and can then be removed easily.

Celox can be applied to deep, narrow wounds because of its granular form. And the Celox-A applicator and plunger delivery system helps the agent reach even deeper inside a penetrating wound.”ž

In addition, it can be spread over large areas of open surface wounds. The granules coalesce into a coagulum that_s reported to lift off the wound easily during surgery.”ž

Fibrin-Based Sealant
Collaboration between the U.S. Army and the American Red Cross has produced a dry fibrin-sealant dressing that represents the next generation of hemostatic products. The dressing contains human fibrinogen, human thrombin and calcium chloride freeze-dried onto a polyglactin-mesh backing. Conveniently, it can be used directly out of the packaging without any preparation.

Despite the human derivation of its components, there_s no risk of disease transmission, such as HIV and hepatitis. Moreover, the dressing is absorbable and doesn_t cause any local tissue reaction. In animal models, it has been shown to control both venous and arterial bleeding with excellent efficacy. Human studies are ongoing, however, so the dressing isn_t currently available and has yet to be FDA approved.

Application Procedure
It_s important to cover the entire bleeding surface, including the deep areas of the wound. Sometimes tissue will need to be splayed open to place the dressing into a deeper portion. If blood soaks through the first layer, a second layer of hemostatic can be placed. If the wound is deep, then abdominal battle dressings or gauze can be used on top of the hemostatic to give it bulk. A pressure dressing, either a roller bandage or ACE wrap, is sometimes used to hold the dressing in place.”ž

Direct pressure from a provider should also be continued on top of the dressings. If needed, other adjuncts, such as pressure point activation or placement of a tourniquet, should be considered. Document the type and number of hemostatic dressings in your run report, and be sure to tell the receiving physician and nursing staff that hemostatics were used.

Recommendations for EMS Agencies
We recommend the adoption of hemostatic dressings in the standard protocols for hemorrhage control as an adjunct to elevation, direct pressure, pressure points and tourniquets. They should not be considered a replacement for these standard means of bleeding control.”ž

All of the products currently available on the market are for temporary external use only, which includes open soft-tissue wounds on the extremities and torso. Take care to investigate and confirm that the most up-to-date formulations of products are used, especially the latest versions of the QuikClot dressing, to avoid complications that were inherent in earlier formulations.”ž

The use of all hemostatic dressings should be monitored for complications and product failures, as new technologies will always reveal deficiencies when use is expanded. It_s paramount to provide instruction and training for any new product that_s incorporated into a protocol.”ž

This article originally appeared in May 2008 JEMS as “Beyond the Battlefield: The Use of Hemostatic Dressings in Civilian EMS.”

Words from the Wise: Female EMS leaders share their perspectives

0
We recently surveyed a cross-section of women nationwide who have had effective leadership roles in EMS. We asked about their careers, their struggles and successes, their frustrations, and their hopes. We also asked them to offer advice for other women who aspire to leadership roles, and recommendations for how organizations and the EMS community can recruit and foster new female leaders.
We use cookies to ensure that we give you the best experience on our website. If you continue to use this site we will assume that you are happy with it.Ok