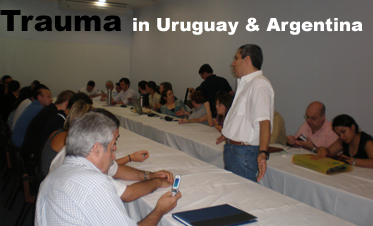 Deaths due to trauma are a big problem for our friends in Uruguay. Annually they see 17 trauma deaths per 100,000 members of their population — 500 to 600 deaths a year — and most of them are due to blunt trauma. Further, Uruguay has become the oldest population in South America, and Uruguayans feel this is due in part to the loss of young lives to trauma.

Public ambulances exist, but much of the population is covered by private subscription ambulances. Just $15 per year gets you an ambulance whenever you need one. Montevideo has three private services, and they take turns backing up public ambulances every third day. The private service I visited has 220,000 subscribers and averages 800 calls per day in the summer and 2,000 calls per day in the winter. Calls for emergencies come in through the Uruguay version of 9-1-1 centers, and calls are routed to the appropriate private service. The dispatch centers at the private services have physicians to help triage responses, determine the needs of the caller and dispatch a physician on a house call if necessary.

Firefighters, or bomberos as they are known in Spanish-speaking countries, assist EMS at motor vehicle collisions and other hazards. Firefighters in Uruguay are all paid, federal employees.

Uruguay is proud of recent seat belt and other prevention initiatives and hopes laws and training can have a positive effect on prevention and improved patient outcomes.

I was honored to be asked to make presentations at a day-long trauma meeting attended by more than 200 doctors and nurses in the capital of Montevideo. I was on a panel with the Prehospital Trauma Life Support (PHTLS) Medical Director Dr. Gerardo Barrios when he commented on the trauma problem in Uruguay. Besides the figures I cited above, he stated that 70% of the country s trauma is from car crashes, and that 37,000 hospital admissions are recorded per year. In talking about the number of trauma deaths, Barrios said that over 10 years, 7,000 people have died from trauma — which would be equivalent to losing an entire town.

They believe that through national PHTLS training, upcoming Advanced Trauma Life Support (ATLS) courses for physicians, legislation, public education and the establishing of trauma systems, they will be able to reduce trauma deaths by 25-40%.

Like most of the world, trauma is the leading cause of death for Argentines under the age of 40. Most of these trauma deaths are caused by motor vehicle collisions. About 10,000 people a year die on the roads of Argentina, which is as many as 30 deaths a day.

Medical professionals in Argentina have been working to reduce the number of trauma deaths through training and public education. For more than a decade, the Committee on Trauma of the Argentine Chapter of the American College of Surgeons has been training physicians to deal with trauma patients through the ATLS program.

Prehospital care providers receive PHTLS training through Fundaci n EMME, which provides prehospital care training throughout Argentina. The end effect is that thousands of physicians, nurses, ambulance attendants, firefighters, police officers, soldiers and miners have received specialized trauma training through ATLS and PHTLS. Dr. Eduardo Eskenazi, the chair of the Argentine Committee on Trauma, is confident that their busy ATLS program has a positive impact on trauma treatment at hospitals all over Argentina. Dr. Oswaldo Rois, of Fundaci n EMME, which overseas Argentine PHTLS courses, feels training of thousands of prehospital professionals has positively impacted outcomes as well. The Argentine Army and firefighters have made PHTLS training a national standard. Both doctors strongly felt legislation and enforcement of traffic safety laws would have a large impact in reducing the numbers of trauma injuries and deaths.

Dr. Rois presided over a trauma conference while I was there. Sponsored by Roemmers, which was represented by Dr. Claudio Jose Perretta, the conference was standing room only with hundreds unable to attend when registration passed capacity. They plan four conferences next year to accommodate the wide interest in trauma education. As one of the presenters, I was treated to a wide range of topics and interesting panel discussions.

Ambulances in Argentina are staffed by physicians and nurses, along with a driver. Larger cities have public or municipal ambulances, but most of the country is covered by private ambulances. The private ambulances operate as subscription services where, for the equivalent of about $15 per year, you can guarantee an ambulance response whenever you need it. Many of the private companies provide a 9-1-1-type service free of charge to assist with overloaded public services. These services staff about one ambulance for every 5,000 Argentines.

The call volume is impressive. For instance, SAME, the public ambulance service in Buenos Aires, handles 2,000 transports a day while EMME, one of five private services serving Buenos Aires, operating in five stations around Buenos Aires handles 500 transports a day. VITAL, another private company, does 1 million transports a year. In all, 200 private ambulance companies operate in Argentina. They’re represented by three associations. SIEM, also a scientific association that provides education congresses, has 140 member companies. MEDI NET and AYUDA represent the rest of the companies.

Fire personnel provide assistance to EMS agencies, much like in the U.S. Also like the U.S., most Argentine firefighters are volunteers. Larger communities have paid firefighters working as either federal or provincial employees.

Our brother and sister professionals in South America fight the same fights we fight here, and it’s a pleasure to share knowledge and experiences with them.