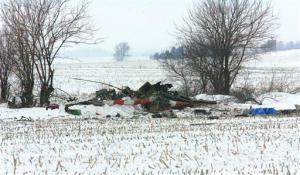 MASON CITY, Iowa (AP) – A nurse, a paramedic and a pilot died when a medical helicopter crashed and burst into flames in a field in northern Iowa.

The helicopter had been headed to Emmetsburg, about 80 miles west of Mason City, to pick up a patient when it slammed into the ground just north of Ventura about 9 p.m. Wednesday, hospital and other officials said. No patient was on board.

KarrieJo VanderPloeg, of rural Clear Lake, said her family was in the car about three miles from home when they saw a bright flash across the sky.

“It was probably from the initial crash because it was red that just lit up the sky. You knew something had happened. It was kind of like lightning, but it was red so you knew it was an explosion of some kind,” she said.

They drove to the site and saw the badly damaged helicopter in a farm field. She said since her children were in the car, they didn’t get closer to investigate. Someone was walking around with a flashlight, likely someone who lived nearby.

Officials later said they used snowmobiles and all-terrain vehicles to reach the wreckage.

Butch Kozisek told the Mason City Globe Gazette that he had been startled by the sound of the helicopter flying so low and that he saw “one heck of an explosion” from his home less than a mile from the snowy crash site.

“Me and the wife were looking out the window and wondering what it was, and then the sound quit for about a second or two, and then just a big ball of fire at ground level,” Kozisek said.

Hospital president and CEO Dan Varnum said that while the two “fulfilled significant duties, they played a greater role as our neighbors and friends.”

The company that owned the helicopter, Med-Trans Air Medical Transport, of Lewisville, Texas, identified the pilot as Gene Grell.

Med-Trans Air CEO Fred Buttrell said at a news conference that Grell didn’t live in Mason City but had been looking to move there for his job. He did not say where Grell lived.

The National Transportation Safety Board and Federal Aviation Administration are investigating the crash.

Buttrell said the helicopter was equipped with a satellite tracking system that monitored its position and other information instead of the traditional onboard black box. He said it was in contact with the company’s communications center during the flight and there was no emergency communication before it crashed.

He said it was not clear whether weather played a role in the crash. It was overcast, about 27 degrees with northwest wind of about 10 to 15 miles per hour at the time of the crash, according to National Weather Service records.

Buttrell said the pilots on medical flights are in command and make decisions about whether to fly.

“If anybody’s not comfortable with accepting the mission we would not do it,” he said.

The helicopter was in compliance with routine maintenance and daily inspections, he said.

Buttrell said Med-Trans has had no accidents since he joined it in 2006. Under previous ownership and a different company name, there was an accident in 2004, he said.

“We work on this daily so this is really tough for us,” he said. “We’re obviously going to go through and understand what unfolded but we’ve been very blessed to be a very safe organization.”