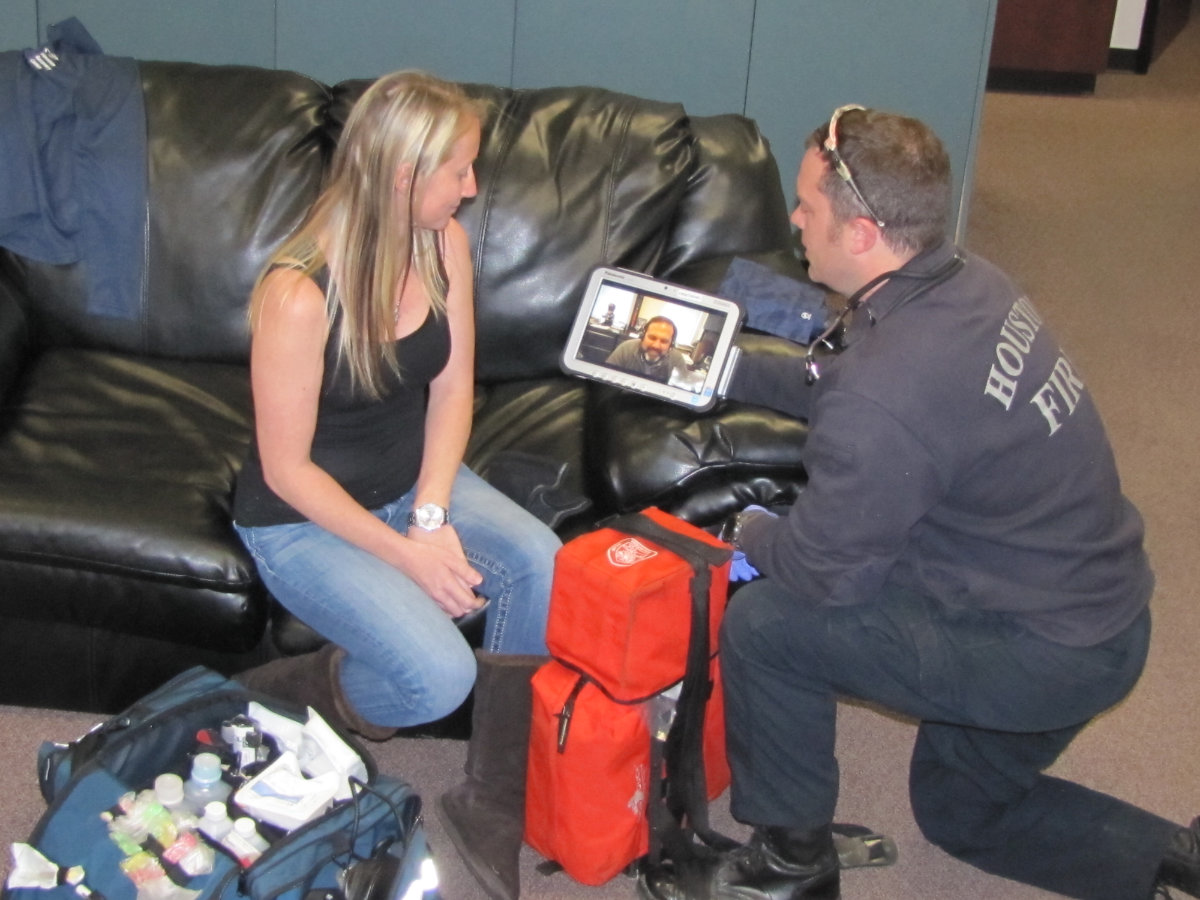 Nationally, it’s estimated that prehospital EMS responds to nearly 40 million annual incidents per year, with two-thirds of these cases requiring ambulance transport to a hospital ED.1

A significant volume of prehospital care is delivered through municipal fire or EMS agencies, which are typically government-funded and have constraints on their ability to raise tax rates or revenues.

Many of the calls to 9-1-1 across the nation are not acute or urgent in nature, yet they frequently require the same rapid, resource-intensive response as true emergencies.2 It’s estimated that somewhere between 20—40% of EMS incidents aren’t urgent and could have been more effectively managed in a primary care setting or clinic.

Coupled with this, is the nature of ambulance reimbursement, which, until recently, required transport only to a hospital ED to get reimbursed from most U.S. payers, including the Centers for Medicare and Medicaid Services. In February, CMS announced a change in reimbursement which will now allow services, particularly those who offer tele-health, to refer patients to facilities other than hospital EDs, and receive reimbursement for doing so. Therefore, there will be financial incentives in the future to allow a wider range of transport options.3

Reforms in the delivery system to accommodate more patient-centered, cost-effective care is necessary given the rising costs of prehospital care.4 Many of the reforms will likely be driven by health information technology, population health practices, price and quality transparency in quality, and use of physician extenders.

Most current transformation efforts center around either hospitals or community clinics. However, in order for programmatic reforms to be successful in shifting the cost-quality equilibrium point downwards there needs to be earlier point of intervention, especially for primary care transformation. Prehospital–or out-of-hospital–EMS care provides such an opportunity.5

Telehealth is the exchange of health information through electronic communication, and it offers one technology solution to improve communications, enhance access to care and improve coordination of care.6-8

Studies have suggested that telehealth can reduce costs of ED visits substantially when delivered through mobile technologies, such as smartphones, tablets and laptops.9,10

It’s estimated that more than 60% of all healthcare institutions use telehealth, although the survey methodology in previous studies focused on hospitals and clinics and didn’t include EMS agencies.11

The objective of this study in Houston was to measure the impact of telehealth-delivered EMS services on overall direct costs for one large agency relative to usual care. 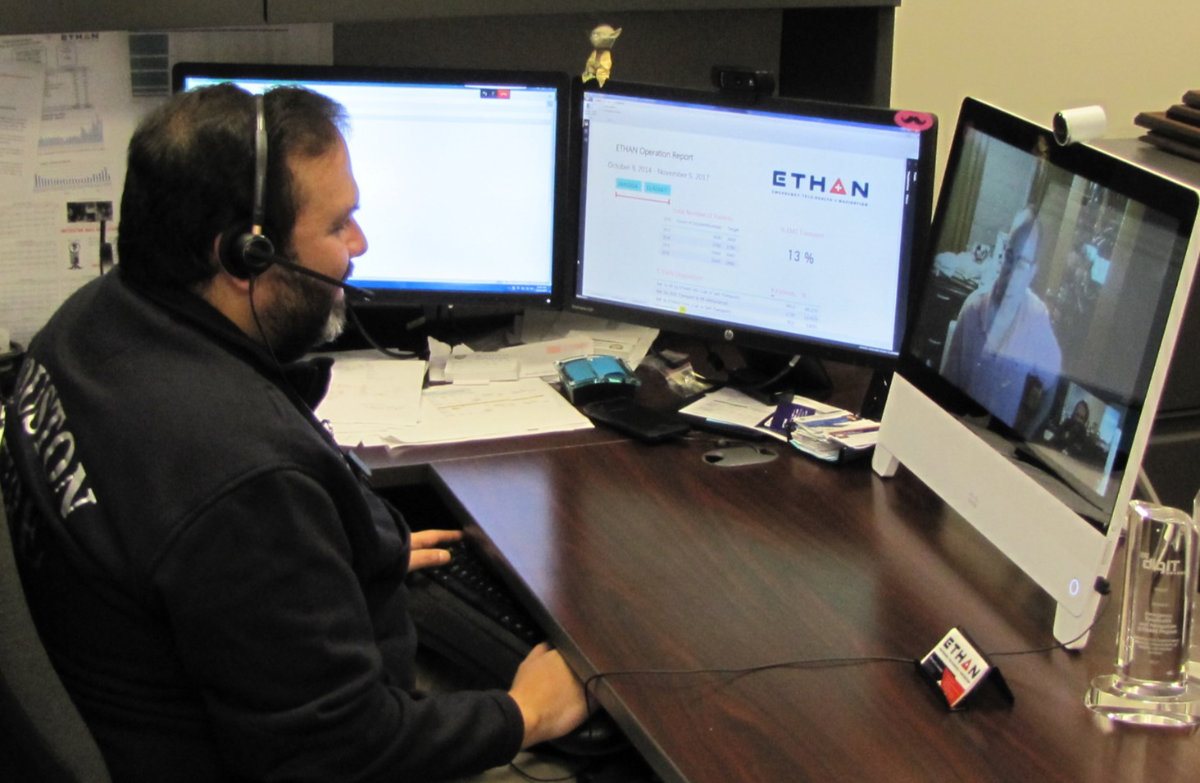 The Houston study was an observational cohort study of all patients treated by tele-EMS over a four-year period (2015-2018). The direct costs of all incidents involving telehealth were measured against a sample of similar incidents involving usual care.

The study setting was Houston Texas, USA and the agency deploying tele-EMS was the Houston Fire Department, one of the largest fire and EMS agencies in the country.

The Emergency Telehealth and Navigation (ETHAN) program has received considerable attention for innovations relating to use of telehealth on such a large scale.

The implementation of the program involved equipping video conferencing software on all paramedic computer tablets for two-way communication from the patient locations with a board-certified emergency medicine physician.

The primary objective was to navigate primary care-related patients away from the ED if not medically necessary, to reduce agency expenditures while achieving the same quality outcomes.

Project ETHAN is the one of the largest prehospital programs in the country.12 Telehealth was conceived as a mechanism to better utilize telehealth technology to improve communication with the patient, to reduce overall costs, and to triage patients to more appropriate care.

Telehealth was enabled through ToughPad paramedic computer tablets, with real-time video conferencing application. All 3,700-plus EMT/firefighters in the agency were equipped with this solution. Training on the solution was rolled out over several months in late 2014 and, in 2015, the program was officially launched.

During the first four years there were over 20,000 patients managed under the program. There has been some seasonality from month-to-month, as seen in monthly variations in Figure 1. 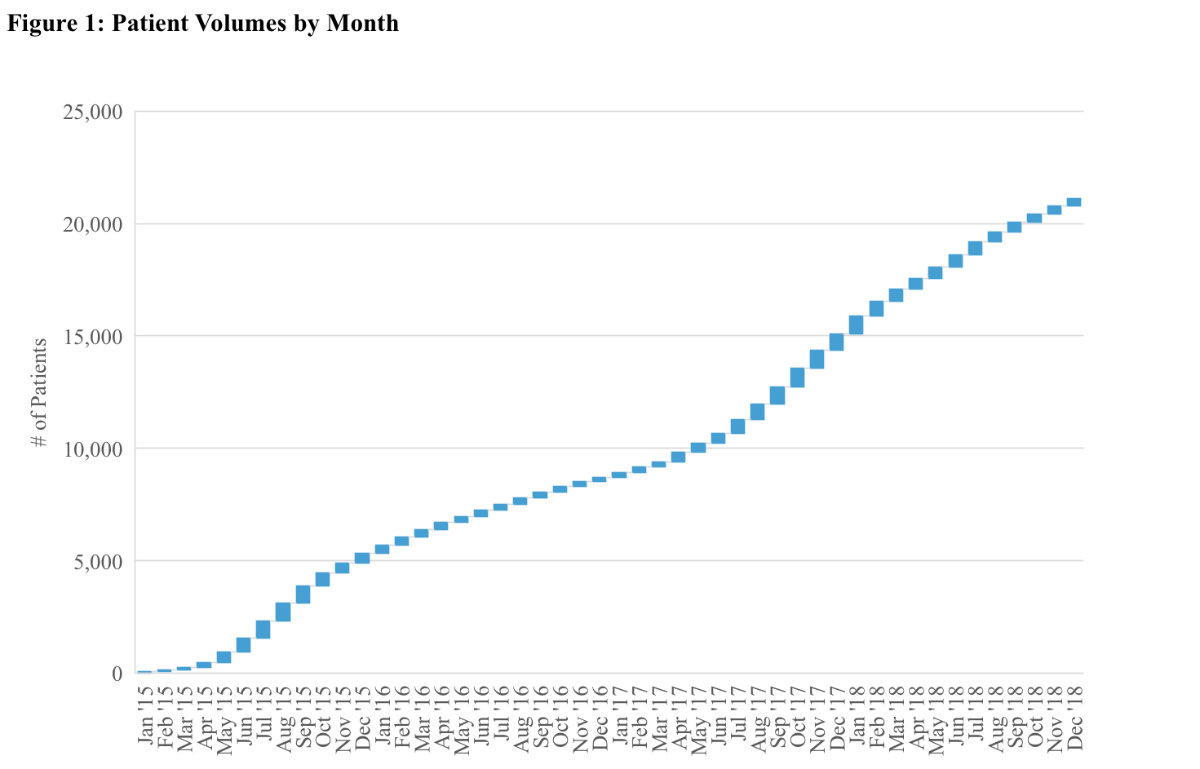 The ETHAN telehealth consults between a dedicated EMS physician and HFD patients were used to guide decisions on patient disposition (i.e., Should they be transported by ambulance to the ED? Should they be offered taxi rides to an affiliated clinic?).

Telehealth helped guide triage to other more appropriate destinations or more appropriate transport options, such as less expensive taxis. Figure 2 shows the reduction in incidents requiring ambulance transports, from a baseline of about 50% to the current average of < 12%. 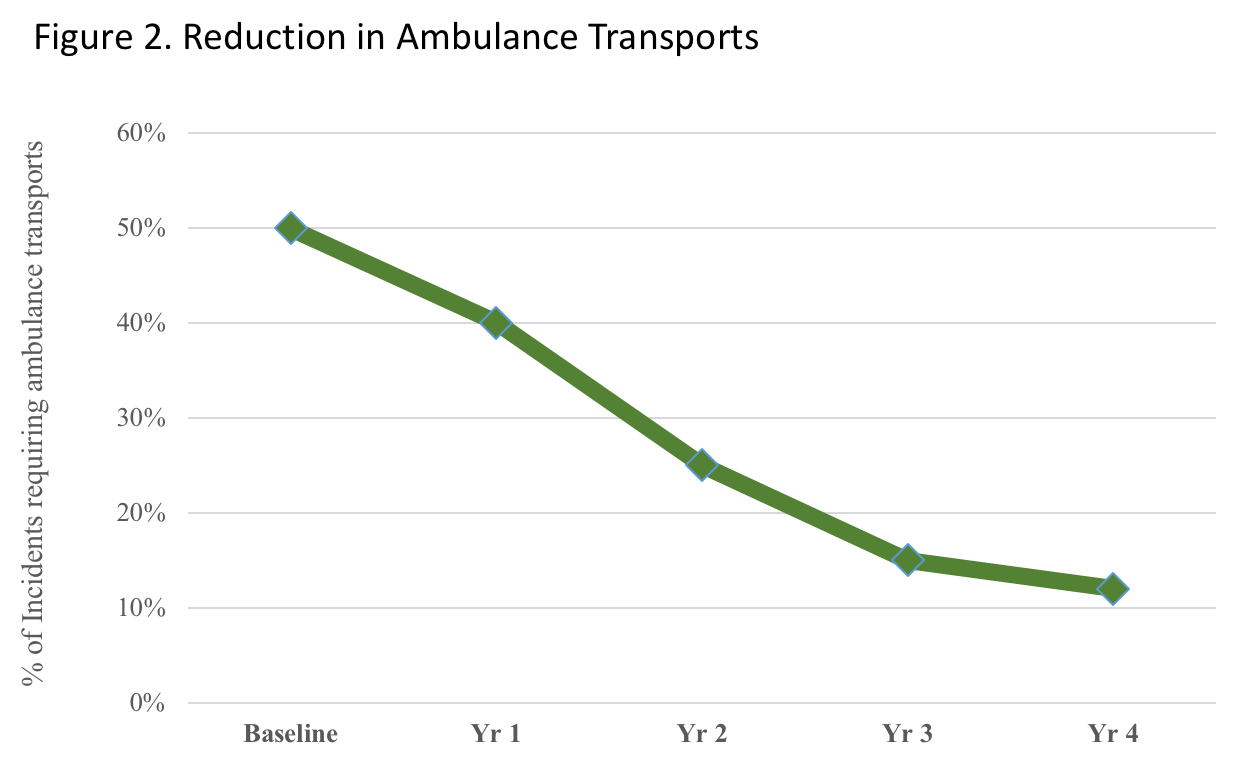 The primary outcome variable in this study was average direct cost per incident. There were two components of the economic evaluation: cost estimation and uncertainty modeling. Resource consumption and the associated cost data were estimated from the agency perspective.

We extracted incident data from the agency’s electronic patient care record system, which provides details on the number of units responding to each incident, the total time from initial 9-1-1 call, to time the unit is ready to go back in service, and the time the physician was involved during each call.

For each incident, we perform micro-costing analyses using direct costs, examining level of resource utilization. Labor, including both paramedic and physician times, were obtained by measuring the start and stop times for each incident by personnel type.

Personnel costs were calculated by multiplying the hours spent on each activity by the adjusted salary per hour, using a base salary including benefits.

A large component of overall costs is the number of emergency vehicles that responded to the call and transported patients to their destination. The cost of transportation was largely influenced by ambulance resource utilization.

These costs are largely dependent on the time durations involved in each incident response. We obtained gross costs from financial statement data for all vehicle expenditures necessary for operations.

These costs were then amortized by the number of incidents to calculate an average per incident for both groups.

In addition, the telehealth intervention included alternative taxi transportation, and we computed the direct expenses for each patient where taxis were used in place of ambulances.

Incidents where incomplete time data existed, or negative time data (where incident duration lasted less than 0 minutes) weren’t included in any analyses. All available data were used in the analysis so no a priori sample size calculations were conducted.

Time and salary data were examined with sensitivity analyses based on variability around the mean. SPSS was used to perform data analysis (SPSS Statistics, version 24, Armonk, NY: IBM Corp.). The significance level of Î±“‰=”‰0.05 was used. We used simulation modeling with variation in the key assumptions based on actual distribution from the data extraction.

A total of 19,731 incidents activated telehealth during this four-year timeframe, representing approximately 2% of the total medical incidents to which the agency responded. This was compared against a matched sample across all non-urgent incidents selected from the usual care group with related chief complaints that occurred in the same time period.

We identified only those patients with similar acuity levels and complaint codes, and excluded any patients with trauma or acute conditions. Table 2 summarizes the results of the mean micro-cost analyses per incident for both the telehealth group and the usual care group.

We noted a $229.69 lower direct cost structure for the telehealth group ($450.08 for usual care vs. $227.39 for telehealth) which primarily resulted from more rapid response times for both labor and vehicles.

EMTs, along with the vehicles they responded in, were able to return to service quicker when telehealth was utilized due to lower frequency of transports to hospital EDs (47.7 minutes differential; mean turnaround time of 34 minutes for telehealth vs. 81.7 minutes for usual care).

There was an increase in associated physician time for the telehealth consultation (mean of 5.1 minutes), but these costs were offset by the substantial reduction in labor and responding ambulance costs. We developed a Monte Carlo simulation model, inputting mean costs and standard deviations to estimate projected savings annually.

Using a simulation involving 1,000 iterations, there was a range of annual direct cost savings between $600,000 and $3.3 million. The mean savings centered around $1,771,260 for the most recent full year of operations. Simulated savings for the four-year period were $4,712,000. Figure 3 shows the range of savings per year. 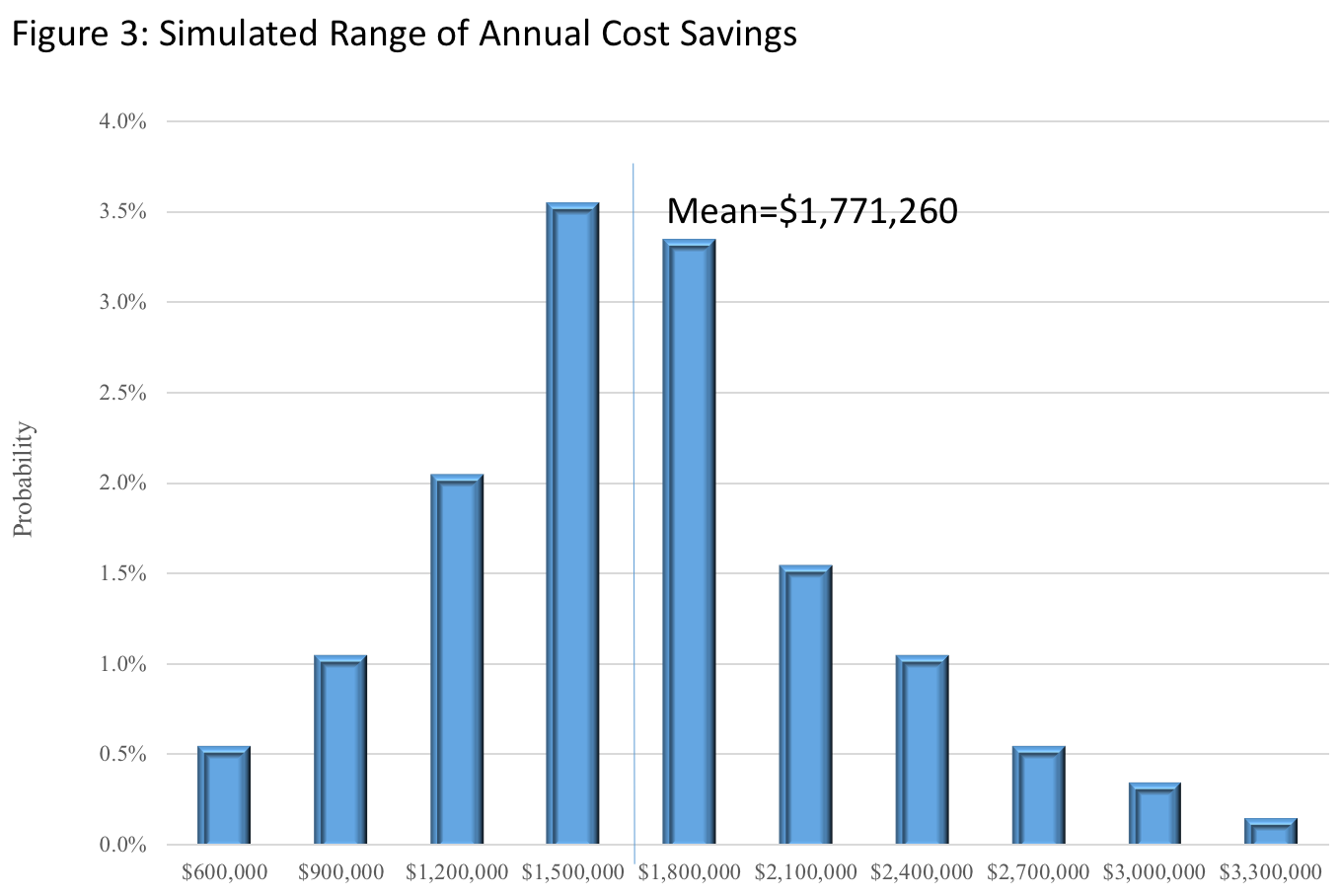 Although several prior studies have examined the cost of telehealth for hospital EDs, there’s been very little cost analyses involving emergency medical services.13-15

Given the increase in costs associated with prehospital emergency care, and the increasing burden on these resources from continuous increased calls to 9-1-1, it’s imperative to redesign the traditional delivery system.16,17

Delivery system reforms for EMS could involve greater use of paramedics for frequent utilizers, changes in protocols for how and where patients get transported, and greater use of mobile technologies, including telehealth. Telehealth has already been incorporated in some aspects of EMS, particularly for early stroke identification and triage.18,19

In this study, we found that a delivery model that incorporated telehealth triage was effective at reducing overall costs significantly, approximately $1.77 million per year and $4.712 million for the first four years. However, a number of practical barriers exist for broader prehospital use for telehealth, which is why very few prehospital telehealth studies have been conducted.20

Challenges such as limited evidence of telehealth efficacy, implementation challenges, initial investment costs, human factors and even internet connectivity are among the most concerning.21 Changes in how financial reimbursement occurs for EMS is one primary barrier preventing wider adoption.22

During this study, we also found significant direct cost savings from telehealth, even with a very limited sample which represented less than 2% of all EMS incidents.

As agencies adopt this technology to a greater extend and reach a larger proportion of the non-urgent incidents, projected annual savings from telehealth would be substantial.

Our study has several important limitations. First, this study was conducted retrospectively primarily relying on electronic health record data. Although that method provided data across a large sample size, it also limits our analysis to just the data contained in the records. We couldn’t ascertain significant differences in patient status or diagnosis and we did not attempt to control for this in the cost analyses. Therefore, those patients who received tele-EMS consults might remain different from those who did not.

We found that there is a $223 net direct cost savings per incident resulting from tele-EMS which produced a $1.77 million annual savings in the most recent year.

We conclude that the use of telehealth, supported by other changes in the healthcare delivery model for EMS, should be adopted in other urban metropolitan agencies. Future initiatives should aim to replicate these results across different regions and agencies.

11. Office of Health Policy, Office of the Assistant Secretary for Planning and Evaluation. (Aug. 12, 2016) Report to Congress: E-health and telemedicine. Department of Health and Human Services. Retrieved Apr. 9, 2019 from https://aspe.hhs.gov/pdf-report/report-congress-e-health-and-telemedicine.

14. Du Toit M, Malau-Aduli B, Vangaveti V, et al. Use of telehealth in the management of non-critical emergencies in rural or remote emergency departments: A systematic review. J Telemed Telecare. 2019;25(1):3—16.

Paramedic Class Has Gone to the Dogs