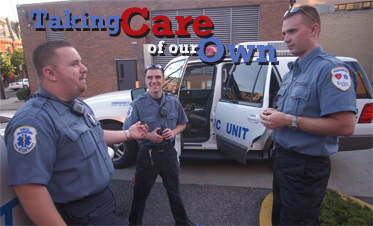 I arrived home the other night in time to watch the evening news, which doesn’t happen often these days. After the usual murder and mayhem, I suddenly saw the name of the fire department I previously worked for, along with the name of a paramedic I knew well. The photo on the screen, however, didn’t resemble anyone I knew. The story: paramedic/firefighter, now on a no-bond hold, accused of sexually molesting his daughter.

How could this be, I asked myself? He was in a paramedic class I audited for college credits, having set my sights on law school. He had tried to get through paramedic school once before and failed. This time he was going to do it right. We became “study buddies.” He wanted the benefit of my street experience, and I wanted to study with someone who was actually in the class. We studied together for a couple of hours twice a week. I liked him a lot. He was married to the sister of a close friend, and he often told me how much he loved her. He was a young, good-looking man with a long career ahead of him.

I didn’t see much of him over the years. I heard he had gotten tangled up with one of the dispatchers, and the affair caused the end of his first marriage. He eventually married the dispatcher, but it was a stormy relationship that ended with an ugly divorce. The next time I saw him was in the courthouse, where he was spending a lot of time in family court. The years went by, and I knew he was getting close to retirement. We sent greetings through other people. And then, this.

I had recognized the uniform on the news because it was the one I’d worn. But I didn’t recognize the man in it. He’d gained a lot of weight. The EMS intelligence hotline, which rivals the Pentagon (and now includes not only phone calls and personal visits but email as well), began talking. Some people said they were shocked. Others said they thought he had probably done what was alleged. When I asked about the monstrous weight gain, one of the paramedics shrugged and said simply, “Alcohol.” I hadn’t known; the other paramedic told me everyone else certainly did. If everyone else knew, I asked, why hadn’t someone intervened? He hadn’t contacted the department and was considered AWOL. The union’s attempts to reach him through his attorney were unsuccessful.

Too often we’re so busy taking care of others that we forget to take care of ourselves, or those close to us. This man had friends, coworkers, shift partners. Didn’t anyone see he was in trouble? Do we really let our fellow EMS providers slowly decline into the depths of alcohol, drugs or worse without trying to throw them a lifeline? Maybe he did it. Maybe he didn’t. That story has yet to be told. One thing is for sure: he won’t work as a paramedic again.