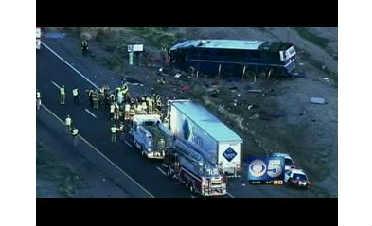 MARK CARLSON and JACQUES BILLEAUD
Associated Press Writers
PHOENIX
Six people were killed Friday when a passenger bus hit another vehicle and rolled over on the interstate south of Phoenix, authorities said.

At least 15 others were injured, including two 11-year-olds and a 16-year-old, in the early morning accident on Interstate 10 about 25 miles south of Phoenix, according to Department of Public Safety spokesman Bart Graves.

Graves said two men and four women were killed. The bus was carrying 21 passengers. All those killed and injured were on the bus.

Ten of the injured were taken by ambulance to various hospitals and five were flown by medical helicopter, he said.

The bus was headed west on I-10 when it rear-ended a passenger car, Graves said. The bus driver lost control and the bus veered off the road and rolled over. Early reports said the bus hit a semi, but Graves said later the semi was not involved in the crash with the bus. Two non-injury accidents occurred behind the bus crash.

The accident quickly scene became a mass of police and rescue personnel as ambulances arrived and rescuers broke out windows of the bus to get to victims, setting up a triage area in the middle of the interstate.

Helicopters landed on the freeway to airlift the most critically injured.

Both westbound lanes of I-10 were closed at milepost 173, and traffic was being rerouted on State Route 587.