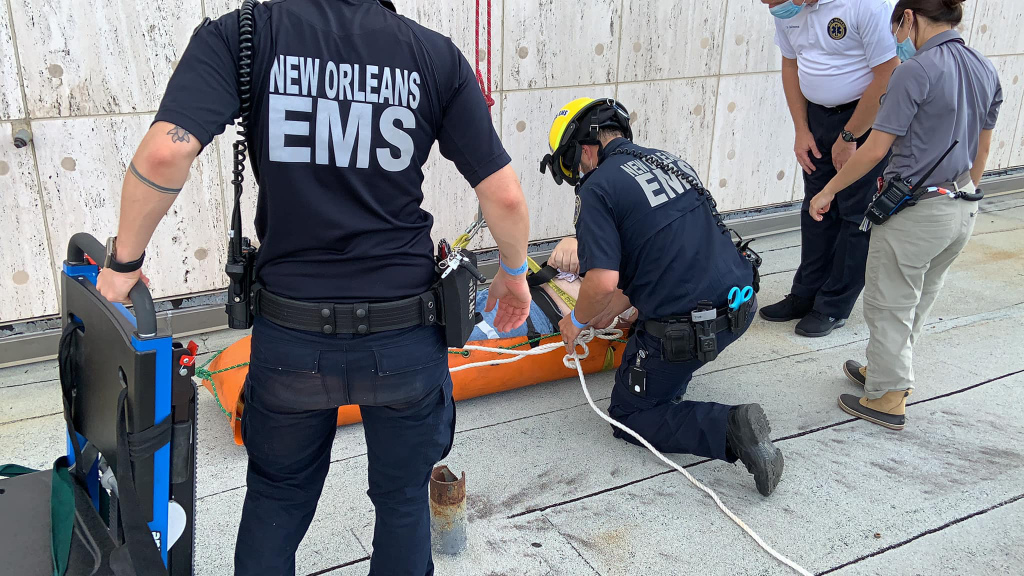 The Times-Picayune | The New Orleans Advocate

Top brass with the city’s Emergency Medical Services department this week investigated claims made in a viral Facebook post that accused paramedics of slowing down their treatment of a motorcycle crash victim to accommodate a reality television crew.

The investigation included reviewing raw video recorded for the A&E show “Nightwatch,” which chronicles the work of New Orleans’ paramedics as they respond to street violence, medical emergencies and other disasters. EMS spokesman Jonathan Fourcade said the video clearly showed that the first responders treated the victim without delay, contradicting key claims from the post’s author.

The Times-Picayune also reviewed the video, which supports Fourcade’s findings.

Even so, the Facebook post — shared 744 times as of late Thursday — has revived a debate about whether the city should allow “Nightwatch” reality TV crews to shadow paramedics and film locals who are injured or incapacitated.

Fourcade said Alweiss, who lives near the site of the motorcycle wreck, was entitled to her opinion about the agency’s involvement with the show, which is produced by the companies 44 Blue and Dick Wolf Reality. But he criticized her description of how paramedics responded to the July 7 crash.

The accident in question occurred near the corner of Touro and Burgundy streets in the Marigny, when a motorcyclist crashed and slid into the back of a parked car.

After 911 was alerted, two paramedics arrived in an ambulance and a third pulled up behind them in an SUV known as a “sprint car.” People operating cameras for the company producing “Nightwatch” were in the back of each vehicle.

Based on more than two minutes of raw footage from two of the cameras, the scene was emotionally charged. The paramedic in the sprint car was greeted by a man who described the motorcyclist “flying” up the street and hitting several vehicles. The man said he “got it all on video” before someone threatened to beat him up.

Meanwhile, one of the paramedics in the ambulance went up to a crowd of people surrounding the cyclist — who was lying silently on his side — and asked if he was awake.

By then, some of the bystanders had noticed the cameras filming the scene and voiced their displeasure.

One woman stepped in front of a camera and shouted: “This man did not consent to y’all having cameras out here while he’s in the middle of an emergency! … That’s his personal business right now!”

Another bystander, a man, shouted: “This entertainment for y’all? This is not entertainment! You heard me? (He) is hurt. Y’all tripping.”

The scene of TV cameras swarming around first responders is not uncommon in the city. “Nightwatch” filmed three seasons in New Orleans between 2015 and 2017 before a hiatus that ended last fall.

An A&E spokesperson said in a statement Thursday that camera crews can film on the street and in other public spaces without permission, as media outlets can. Camera crews did not film the motorcyclist in the back of the ambulance because recording him in such a space required permission that the production was not able to obtain, the spokesperson said.

But the Marigny incident went viral in large part because Alweiss alleged that one of the paramedics gave an on-camera interview before helping the wounded motorcyclist.

She also claimed in her Facebook post that a second paramedic waited for her colleague to finish the interview while residents implored them to focus on tending to the motorcyclist, face down and screaming in a water-filled gutter — only for the ranking paramedic to rebuke them for trying to block the production crew’s camera angles.

Other neighbors also chimed in on social media, saying it appeared to them that paramedics were putting the camera crews’ access over the motorcyclist’s well-being.

Fourcade said the city and the show’s producers reviewed the raw footage and paramedics did not give an interview. The footage also showed first responders immediately attending to the injured motorcyclist and pulling out a stretcher and spine board from the ambulance. In fact, within 55 seconds of parking her vehicle, the sprint car paramedic had to tell a bystander to please make way for the stretcher.

Alweiss on Thursday said she was unavailable to speak with the newspaper because of a family situation.

But she separately told The Lens that she felt “awful” if she got some details wrong, had no motive to make up any claims, and didn’t want to blame EMS, which does “heroic work.” Her point, she said, was to highlight how she and her neighbors questioned the agency’s focus “given what was occurring with cameras … and also the chaos that ensued.”

Another A&E show that previously filmed in New Orleans — “The First 48,” which chronicled homicide investigations — left town when its producers were accused of withholding footage that could benefit a murder suspect.

Producer Kirkstall Road Enterprise swore in court that they did not have any footage which was not aired. But the suspect’s attorneys later recovered footage of an unaired interview with a friend of the murder victim, prompting the judge overseeing the case to upbraid the city for welcoming shows like “The First 48.”

But, in the fall, the city announced it had welcomed “Nightwatch” back to document “the beauty and resilience” of a city that has made significant economic and emotional sacrifices while enacting measures to slow the spread of the coronavirus. A new season of Crescent City-set episodes began airing in March.

“If you don’t like ‘Nightwatch’ or don’t think it’s right, start a petition, or reach out to the City Council,” Fourcade said. “But don’t say our paramedics aren’t doing their job or aren’t helping patients. That’s their number one job, and they do it — cameras or no cameras.”

Visit The Times-Picayune | The New Orleans Advocate at www.nola.com

7.16.2020 0
Former White House physician Ronny Jackson is a step closer to winning a seat in Congress.
We use cookies to ensure that we give you the best experience on our website. If you continue to use this site we will assume that you are happy with it.Ok