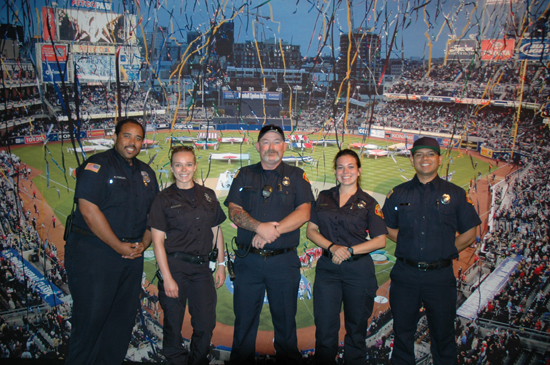 Peanuts and Cracker Jacks are not the only thing being prepped for tonight’s 87th Major League Baseball All-Star Game, being held at Petco Park in downtown San Diego, Calif. The city’s fire and EMS system has been in full swing to ensure everyone is protected as they enjoy the game.

The All-Star Game itself–to be held tonight, July 12–is only a fraction of the week of activities spanning several downtown venues, in total expected to draw about 160,000 visitors. The footprint of the All-Star event includes Petco Park; the adjacent San Diego Convention Center, where a multi-day, interactive Fan Fest, is being held; and a nearby city park, hosting major headliner concerts by artists such as Gwen Stefani. Several downtown city streets have been closed for a public block party.

Crews at the All-Star Game may respond to any type of emergency, ranging from chest pain to syncopal episodes to alcohol-related incidents. Events such as the Home Run Derby, where baseball’s top sluggers hit as many home runs as possible in a timed, fast-pitch format, are rife with opportunities for fans to be struck and injured by baseballs flying into the stands. In addition, when people travel to attend events, being around unfamiliar surroundings and engaging in non-typical activities creates potential for medical emergencies.

This is the third All-Star Game San Diego has hosted; the previous games were held in 1978 and 1992. While host cities welcome visitors from across the country, the major crowding impact was anticipated to be mostly locals and visitors from across Southern California who came to check out the scene surrounding the game. San Diego’s downtown entertainment district, known as the Gaslamp District, experiences major crowding and multiple EMS responses on any given night, let alone during a national sporting event. While impact to existing resources was anticipated, EMS for All-Star week was planned to be as self-contained as possible so as not to be detrimental to the city’s already busy EMS system. Crews are staged strategically throughout the ballpark, convention center and outdoor venues.

San Diego’s fire, EMS and law enforcement officials collaborate closely to oversee these events. They also have an on-site joint unified command post with dispatchers dedicated to field calls from the area. Firefighter paramedics will be out on the mobile operations detail (MOD), or ZoomCraft scooters, patrolling downtown. The MODs can be dispatched and reach patients in crowded areas quicker than ambulances. EMS crews will carry special trauma backpacks stocked with bleeding control items and multiple tourniquets. A quick response American Medical Response (AMR) cart equipped with a gurney and ALS equipment is designated to respond inside the ballpark.

AMR is the EMS provider for the San Diego Padres, Petco Park and the All-Star Game festivities. Special events manager John Reisdorfer has been coordinating EMS for national and local events since 1992.

“This is to baseball a lot like the Super Bowl is to football,” said Reisdorfer, who is nationally-recognized for his work at high-profile special events of all types.

As opposed to baseball’s other major event, the World Series, where the location isn’t known until the end of the regular season, The All-Star game location is announced well in advance. Planning in San Diego began last year when a delegation visited the 2015 All-Star game in Cincinnati, Ohio. San Diego is currently hosting visitors from Miami, Fla., where the event will be held next year. In the spirit of collaboration, they are happy to pass along lessons learned from their system.

This year, special focus in being put on security at all levels in light of recent events of mass-casualty violence and civil unrest. Public safety is highly visible at the event and many precautions have been taken to prevent a large-scale incident from occurring.

In a unique EMS—related highlight, baseball legend Rod Carew made a special appearance at the All-Star Fan Fest this year. Carew is a sudden cardiac arrest survivor, and has since partnered with the American Heart Association (AHA) on a campaign called Heart of 29 (his jersey number) to increase awareness and funding for heart health. He made a special presentation to thank his rescuers from Corona Fire Department, followed by the AHA teaching a team of little leaguers compression-only CPR. The AHA has a booth at Fan Fest to teach CPR to attendees throughout the week.

As always with special event coverage, the focus is about providing impeccable customer service and helping create a good experience for guests, something that AMR, San Diego Fire-Rescue and all of San Diego’s public safety hold close to heart.

As Reisdorfer said, “We take care of our patients where they live and work, why wouldn’t we be there where they play?”