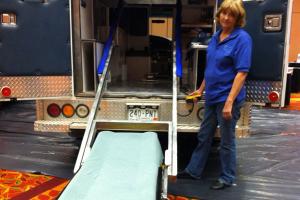 This is a story about an EMS device that arose from a situation no ordinary person would appreciate. But as an EMS provider, trust me, you will. When you read what happened, you’ll understand its significance immediately. In fact, you’ll want to stop reading and salute the EMT who invented it.

Imagine you’re a volunteer at a small rural EMS agency. You and your partner, both munchkins, respond alone for a rollover motor vehicle collision. On arrival, you encounter an inverted vehicle containing two small children in the back seat and two generously proportioned adults up front. The front passenger weighs about 350 lbs., and the driver at least 500. Somehow, you’ll have to extricate all four patients and get them into one ambulance.

Let’s salute Doris Van Ness. Doris and her partner did something rural EMTs do every day, Life-Saver–something that transcends all of the spreadsheets, databases and journal articles to which we devote so much attention.

They adapted to their situation and overcame. They enlisted the help of enough passing motorists to stabilize, extricate, carry and load all four patients into the ambulance for transport.

People like Doris do what they do for free because there simply are no other resources. Sick people are getting heavier. And Doris’ agency, is struggling financially–as are most small agencies. In the future, they may or may not be able to come up with even the 50% matching funds for a grant to obtain a self-lifting cot and a loading system that would at least help them during lifting and loading.

Self-lifting cots are wonderful tools, but their extra weight is nothing to sneeze at. Anyway, back to Doris. After the call, she patented a completely different loading idea, using something she did have: her vehicle’s electrical system, a three-quarter-ton bumper winch, some extruded aluminum and a basic understanding of physics.

Her design is nothing like the loading systems you’ve seen so far. It certainly doesn’t look strong enough to do the job of loading a 500-lb. patient. But Doris isn’t fooling around; her lift is based on a parallel double boom, almost like you’d see on a tow truck–only the boom is hinged at the aft end of the deck in an ambulance’s patient compartment. At the forward end of the boom is a winch attached to the frame under the vehicle’s deck. When it lifts, it works kind of like a teeter-totter.

The boom incorporates a pair of telescoping beams attached to channels intended to integrate with the upper frame of any ambulance cot. When engaged and fully extended, the whole assembly is designed to lift a combined patient-and-cot weight of 1,200 lbs. (It’s been tested at 1,800 lbs.)

Called the Bedrock Lift, Doris’ invention can be installed initially in three hours.

It weighs 350 lbs., and it can be removed or reinstalled in minutes. It can be pressure-washed, and it’s designed to lift any kind of cot. Doris demo’ed her beta unit for us at the fifth annual Colorado EMS Safety Summit in Loveland, Colo., in early October. It wasn’t fancy, and it was mounted in a small second-hand ambulance she had purchased just for demonstrations. But fancy or not, it’s a horse.

The production model will come powder-coated. It’s designed to be mounted without modifying an ambulance’s existing frame. Doris said she plans to install her lifts on-site and provide instructions in their use. They say that necessity is the mother of all invention. I’d like to congratulate Doris for being the mother of this back-saving, practical invention.For more information, contact her at dorvnn2@aol.com.