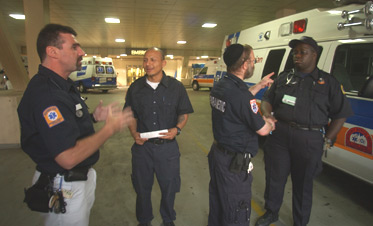 Mark Twain once wrote, Humor is the great thing, the saving thing. The minute it crops up, all our irritations and resentments slip away and a sunny spirit takes their place. Having a sense of humor is essential for long-term survival in EMS I am convinced of that. If there wasn t a need for humor in EMS, my good friend Steve Berry would still be deaf-interpreting for Helen Keller (or C-Span).

Having a sense of humor is essential in most professions. Of course, by federal statute, United States Postal Service employees and Internal Revenue Service (IRS) employees are explicitly forbidden to have any sense of humor. That s why I fear socialized medicine in the United States for it would be a cross between the post office and the IRS. That thought ought to scare the hell out of you.

One aspect of professional humor is the rite of passage. A rite of passage is a ritual that marks a change in one s social or professional status. The military is replete with rites of passage. For example, when a sailor is promoted to Chief Petty Officer (E-7), there s quite a bit of ritual that ultimately ends in the sailor donning the khaki uniform that chiefs and naval officers wear. EMS and the fire service have similar, but less regimented, rituals. Surviving these rituals marks the person s acceptance into the organization or profession.

The EMS and fire department rituals of today are not quite the same as when I was an EMT, but they re still there. They involve such things as sending the newbie to Central Supply at the hospital to get a set of sterile Fallopian tubes because the ones in the ambulance have expired. Another popular ritual is to have the newbie go to Auto Zone or a similar auto supply store to purchase diesel spark plugs. In the past, some rites of passage were borne of weapons-grade stupidity, and these should be abandoned. Anything that pertains to race, religion, gender, sexuality or political beliefs should be strictly off-limits.

At our station, we had several rites for newbies. For example, we would wait for the newbie to head for the bathroom with a newspaper or magazine. As soon as he closed the stall door we would all get up, get a ladder off the truck, and climb up on the roof of the station. Then, we would pull the ladder up behind us and wait. This, of course, would cause a great deal of fear and confusion in the newbie once he realized he was alone in the station and the apparatus was still there. Another trick would be to have a uniform inspection and ask the newbie to put on their Class B uniform. As soon as he left the bunk room he was drenched with large quantities of water from a red line or 1 _ inch hose. We would all get a great laugh and move on to the station duties. Eventually, another newbie came on board, and the former newbie was then in on the tricks.

But I remember one newbie who saw through the tricks. One time, he exited the bathroom stall and came back and found nobody in the station. He looked and looked and didn t say a word. We really thought we had him. He went to the watch office, called dispatch, and asked that they set off the tones for our station. Shortly, the tones sounded. We rapidly put down the ladder, climbed down, and found the newbie standing next to the ambulance. All he said was, Oh, I was wondering where you guys were.

Similarly, when we had a uniform inspection, he came out of the bunk room and was drenched. Without a word, he walked back into the bunk room and, in a minute or so, came out with a dry uniform. So, we drenched him again. He again went in a put on a dry uniform and came back out. Then he was drenched a third time. This continued for about seven or eight rounds until we grew tired of drenching the poor fellow. He never said a word. Later, when we went into the bunk room we found that the newbie had been systematically putting on the uniform of everybody in the station (and not his own). A large pile of wet uniforms filled the shower. At that point we figured that he had certainly met the rites of passage and we then left him, alone. Today, he s the fire chief of a large metropolitan fire department.

Harmless rites of passage are OK for most people. They should be good natured and not embarrass or offend the person. Certain things are off-limits, and no jokes should ever get to the point of hazing. The right rites ultimately promote a camaraderie and allegiance. But they must always be in good taste.

Once I ve truly determined that the various statutes of limitations have expired, I ll tell some stories about EMS in the old days. Whenever I tell these to modern EMS people, they think I m pulling their leg. But the stories are true, and this relates to another favorite Mark Twain quote Fiction is obliged to stick to possibilities. Truth isn t.