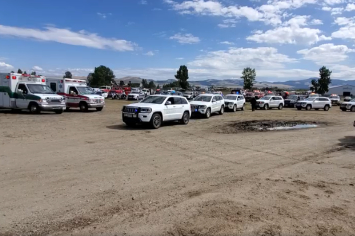 Video of the funeral procession lining up from the Facebook page of the Powell County Ambulance Service.

ANACONDA, Mont. — A line of first responder vehicles stretched for more than a mile Sunday in honor of an EMT killed while on the job at a demolition derby.

DaryLynne Day, 36, was killed Aug. 18 after one of the cars on the track got pushed out of the arena and crashed into her. Several other spectators were hurt during the Tri-County Fair in Deer Lodge.

Montana Governor Steve Bullock ordered flags at half-mast in honor of Day. Day’s family members tell KXLH-TV they were thankful for all the support.

“Oh, it’s overwhelming, the reaction of the people, the EMT people, they’re special anyway, and really showed a love that won’t be forgotten,” Day’s cousin, Jerry Moses, told the station.

Day, who worked for Powell County Ambulance Service, leaves behind a husband and two children.