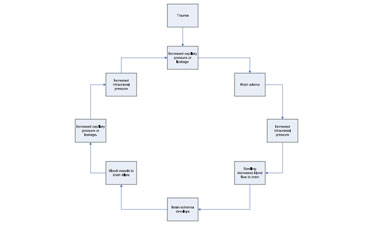 Most EMS textbooks will have a blurb in the chapters on head injury about the Cushing reflex. But how well do you actually understand this important emergency care concept?

The brain is the control center of the body. It s well protected by the bones that make up the cranial vault. This protection, however, is a two-edged sword. Although the cranium helps protect the brain from injury, it also can injure the brain by limiting tissue expansion following injury.

Brain edema usually results from increased capillary pressure or actual damage to the capillary walls that allows them to leak. As the brain starts to swell, two things begin to occur.

First, edema begins to compress the blood vessels supplying the brain. This compression results in reduced blood flow to the brain and ultimately brain ischemia. The ischemia will then cause the arteries leading to the brain to dilate, causing an additional increase in capillary pressure and a further increase in intracranial pressure. The increased capillary pressure worsens edema (See Figure 1).

Second, decreased cerebral blood flow to the brain subsequently decreases oxygen delivery to the sensitive brain tissues. This reduces the ability of the capillaries in the brain to function normally and results in increased capillary permeability and leakage. When the cells of the brain lose their energy supplies, the intracellular pumps (sodium/potassium pumps) start to fail. This allows sodium to enter the cells of the brain, causing cellular edema and ultimately cell death.

So how does all this relate to the Cushing reflex?

Blood flow to the brain is directly related to cerebral perfusion pressure (CPP), which can be defined as follows:

Thus, to perfuse the brain, the arterial blood pressure (represented as mean arterial pressure) must be greater than the intracranial pressure. Otherwise, the blood could not be pushed into the cranial vault and the brain would not be perfused.

The Cushing reflex was first identified by U.S. neurosurgeon Henry Williams Cushing. It was described as the presence of hypertension and bradycardia associated with increased intracranial pressure.

The Cushing reflex helps save brain tissues during periods of poor perfusion. Unfortunately, it s a late sign of increasing intracranial pressure and indicates that brainstem herniation is imminent. A related term is “Cushing’s triad,” which is the presence of hypertension, bradycardia and irregular respirations in a patient with increased intracranial pressure. These findings are another manifestation of the Cushing reflex. The irregular respirations are due to reduced perfusion of the brainstem from swelling or possible brainstem herniation.