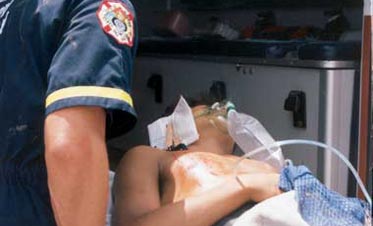 The Science
The Ontario Prehospital Advanced Life Support (OPALS) Major Trauma Study was a before-and-after, system-wide controlled clinical trial conducted in 17 cities. The researchers enrolled adult patients who had experienced major trauma in a basic life-support phase and a subsequent advanced life-support phase (during which paramedics were able to perform endotracheal intubation and administer fluids and drugs intravenously). The primary outcome was survival to hospital discharge.

The OPALS Major Trauma Study showed that system-wide implementation of full ALS programs didn’t decrease mortality or morbidity for major trauma patients. They also found that during the ALS phase, mortality was greater among patients with Glasgow Coma Scale scores less than 9. The authors concluded, “We believe that emergency medical services should carefully re-evaluate the indications for and application of prehospital advanced life-support measures for patients who have experienced major trauma.”

The Street
This study will add fuel to the fire that continues to rage across the U.S. Is ALS better than BLS? Before we go on, remember that a Canadian EMT has many times the training hours of the U.S. EMT-Basic. With that being said, the OPALS study spent $15.8 million dollars in training and operational upgrades to implement ALS for trauma. During the ALS phase of this study, only 102 intubations were performed on 1,492 patients. That’s $154,000 per intubation. OK, that’s not fair. They also established 779 IVs, ran fluids 144 times and gave morphine 35 times. Let’s just call it 1,060 ALS interventions. That’s more reasonable — $14,905 per intervention.

But it didn’t make any difference!

More importantly, when they noted the subset of patients who were intubated were those with GCS less than 9 because they didn’t have RSI. Not surprising, they had poorer outcomes similar to what has been documented in other studies with traumatic head injury and prehospital intubation.

Now, before you start sending me death threats: Do I think there is a role for ALS in trauma? Absolutely. But is the answer to simply train everyone and send them forth, like they did in Canada, and then hope for the best. No. We must learn from our brave northern brethren and examine our systems closely. Further, we must make risk-benefit analysis the cornerstone of any implementation. Bigger isn’t always better. In many if not most systems, pre-planning and a tincture of accelerator may save more lives than the ET tube or salt water.