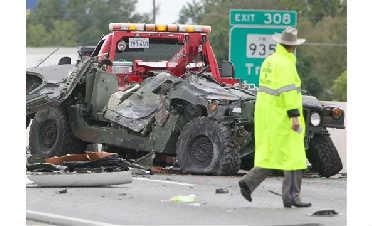 TROY, Texas A National Guard Humvee went airborne on a Texas interstate Wednesday and vaulted into an oncoming lane, triggering a six-vehicle crash that killed a soldier and two other drivers, authorities said.

Texas National Guard spokesman Col. Bill Meehan declined to say where the soldier, who was driving the Humvee, was stationed or where she was going at the time of the crash. The drivers of an 18-wheeler and a car also were killed, authorities said.

“Our thoughts and prayers do go out with the soldier’s family and those of the other people involved in the accident,” Meehan said.

The Humvee was traveling southbound in the rain on Interstate 35 in the small town of Troy about 11 a.m. when it went airborne, cleared the center barrier and slammed into the oncoming car and 18-wheeler, according to the Texas Department of Public Safety.

The rig then crashed into a truck towing a trailer, then into a garbage truck.

It was not immediately clear what caused the Humvee to go airborne, authorities said. The crash closed the interstate in both directions for about three hours.