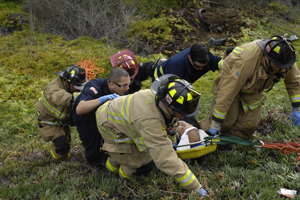 San Diego Fire-Rescue paramedic/firefighters use a Stokes basket to carry a 46-year-old male patient up a steep embankment after being called to a single-vehicle crash. The call came in after a man drove off the road, remained airborne and traveled about 140 feet forward while dropping about 25 feet. The driver and vehicle landed in iceplant and bounced once, which moved the car about 15 feet from the initial impact point to the base of a steep canyon bank. Less than six minutes after a truck company arrived, the crew was able to quickly assess and perform a rapid extrication to remove the driver from the car while taking C-spine precautions. The patient was then immobilized to a backboard, placed in a Stokes basket and transferred up the slope by ropes and pulleys attached to an engine and ladder truck. The rescue took 24 minutes to get the patient from his car back to road level, and paramedics spent six minutes assessing and loading the patient for transport. Despite the seriousness of the event, the transport to Sharp Memorial Hospital was made without lights and siren because the patient sustained  only minor lacerations and no life-threatening injuries.