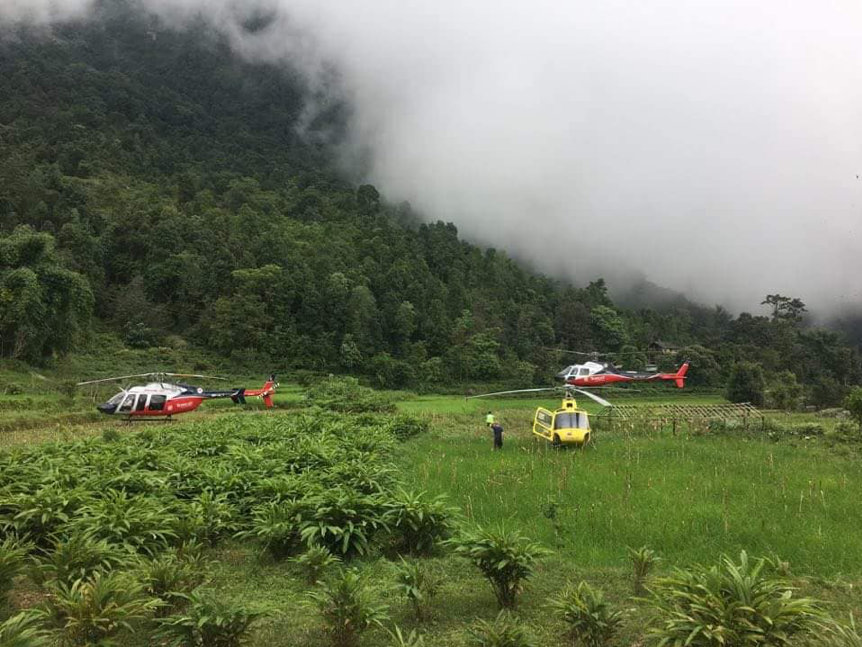 On Sept. 9, 2018, in Samagaun in the Gorkha district of the Himalayan nation Nepal, an Altitude Air 9N-ALS Airbus Ecureuil (AS350 B3e) H125 helicopter was on its return flight with an expected time of arrival at Tribhuvan International Airport in Kathmandu–the capitol of Nepal–at about 8:18 a.m. The chopper had taken off from Gorkha at 7:40 a.m. and had lost its contact with the tower at around 8:00 a.m.

The Nepal Mediciti Hospital helicopter EMS (HEMS) team received a call from the Shree air helicopter company and was informed to stand by for medical rescue to be sent to the crash site.

It takes the Mediciti HEMS crew less than 15 minutes to get prepared and reach the hospital’s Helipad with all of the necessary lifesaving equipment.

Additional calls started to come through, including one from the Simrik air helicopter company, who also informed Mediciti HEMS to get ready for the potential medical rescue flight.

The helicopter crash site was reported to be in the highly dense forest of the Nuwakot district, which is about 50 miles (80 kilometers) northwest of Kathmandu. The helicopter was carrying six passengers and was piloted by a highly experienced helicopter pilot with experience in high altitude and rescue operations.

Although the weather in Kathmandu was pleasant, adverse weather at the crash site delayed the Mediciti HEMS team from taking off. Then, at about 10:30 a.m., a Simrik air helicopter with call sign 9N-ALT, commanded by Captain Bibek Khadka was with medical team.

The Mediciti HEMS lifesaving equipment were loaded on board with the expectation and high hope of saving lives. The team included rescuers who were fully prepared to conduct a human sling operation or longline operation. 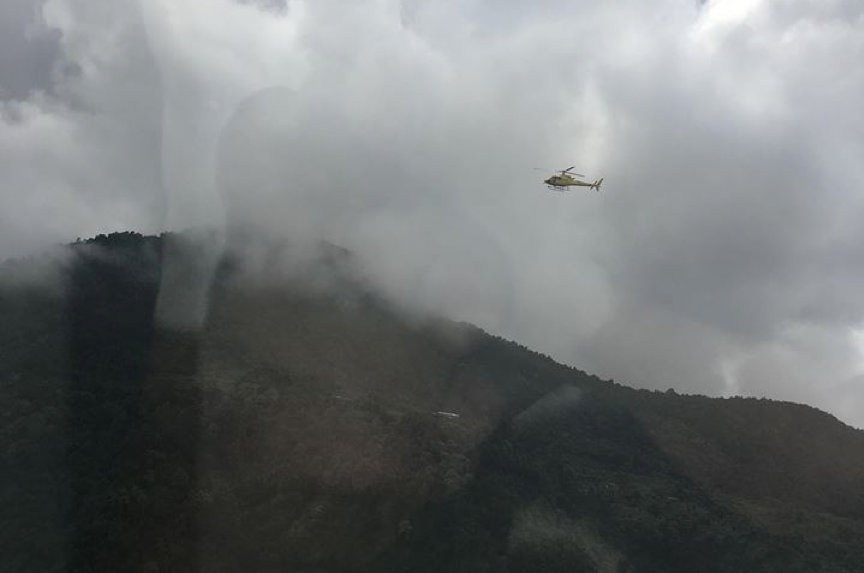 One of the rescue helicopters hovers in an attempt to more accurately locate the crash site.

Upon approach, it was next to impossible to locate the crash site due to the grave weather condition. The geography didn’t appear to accommodate dropping the rescuers; however, Khadka’s expert piloting allowed the rescuers to drop down in the middle of a steep hill. As the rescuers started to move up the hill, other rescue helicopters also arrived, including Simrik air 9N-ALP (Captain Surendra Paudel), Shree air 9N-ALK (Captain Priya Adhikari), and Altitude air 9N-AMS (Captain Gabriel Kasberger).

Paudel also dropped a few rescuers at the hill site, while Priya, Surendra and Gabriel maneuvered in an attempt to move closer to the crash site.

Time passed. The Mediciti HEMS crew and lifesaving devices waited for information from the rescuers. It was late afternoon already, and the weather continued to deteriorate. There was no hope to conduct a human sling operation.

The weather was changing rapidly ever 2­—5 minutes, and the tip of the hill was now fully covered by clouds and fog.

Rescuers reported via satellite phone that one of the passengers was still alive, but full of agony, which made the members of Mediciti HEMS more anxious and eager to reach the patient as early as possible. The team became worried they would have to go back to Kathmandu empty handed .

Two rescuers returned from the site and explained the patient’s condition. He mentioned that there was clearly no hope of conducting a sling operation but that it might be possible to land the helicopter at the crash site. The rescue group members gathered and finally concluded to go as high up as possible to find a place nearby for the helicopter to land.

In the meantime, patient would be carried on a rescuers back and brought up to the nearest flat surface. This was expected to take about 40 minutes, so the pilot decided to fly in 30 mins, so that the patient will be close to the flat landing surface and the team could quickly pick the patient up.

The weather was still adverse; it was cold and the sky was full of clouds and a bit dark and foggy. Visibility was poor, making it difficult for Khadka to reach the flat surface.

Visibility remained poor, and it was difficult, but Khadka was able to land the chopper. The timing was perfect: 7—8 minutes after landing, the patient was brought up to the landing site. 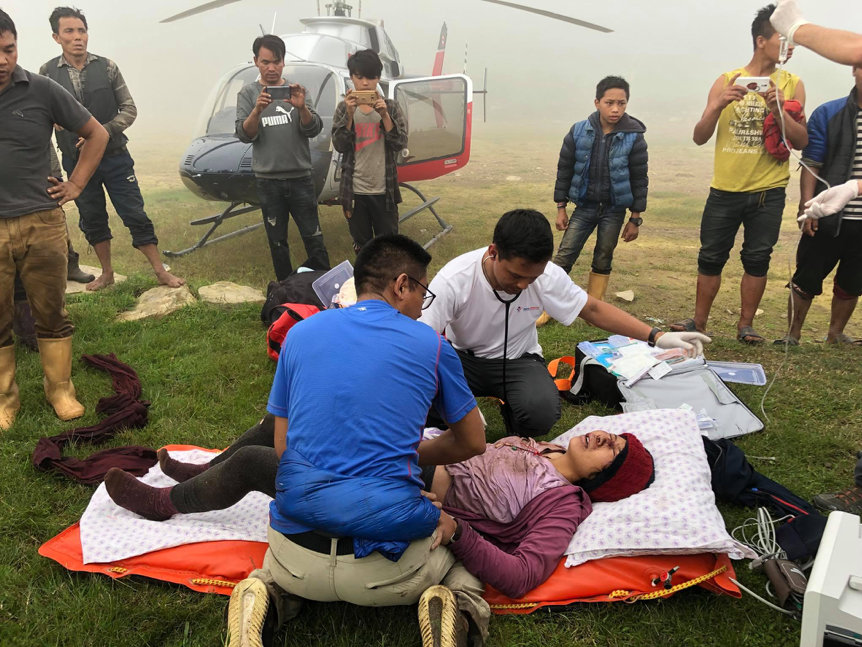 The Mediciti HEMS medical team, Doctor Karki and Paramedic Neupane, conduct an initial assessment of the patient near the crash site.

The patient, a 25-year-old female who was a resident of Gorkha, was brought up by rescuers for care by the onboard medical team of Sanjaya Karki, MD, and Paramedic Ramesh Neupane.

She was hypothermic, dehydrated and breathless; unable to move her limbs. She was clearly experiencing a great deal of pain.

Managing the patient’s hypothermia was a high priority along with ABCD (i.e., airway, breathing, circulation, disability), according to prehospital care protocol.

Although typically applying the “stay and play” approach, preferring to stabilize the patient while on scene, after 20 minutes of patient care, the weather was still rapidly deteriorating and time was running out.

Thus, after 20 minutes of patient care, the Mediciti HEMS crew had to “scoop and run,” or the patient may not survive at all. 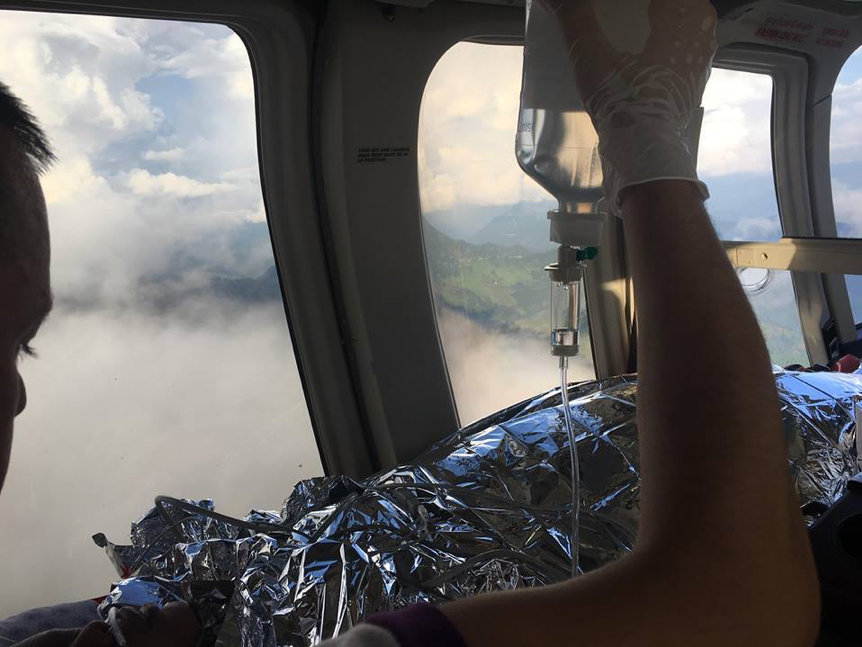 Physicians Dhirendra Kaumar Malla, MD, and Ashish Karn, MD, were standing by at the Mediciti helipad when the HEMS crew returned. The patient was offloaded and brought into the ED.

Prehospital care (both ground EMS and HEMS) is still in its infancy in Nepal, however, two hospitals in Kathmandu are properly providing this service, and the outcome of patients have been phenomenal, with many lives saved.

Acknowledgements: Special thanks to the hospital’s emergency medical team who cared for the patient, including Sanij Singh, MD; Dhirendra Kumar Malla, MD; Abhijit Adhikary, MD; and Vijay Chaudhary, MD. Thanks also all our beloved medical officers, nurses and paramedics.