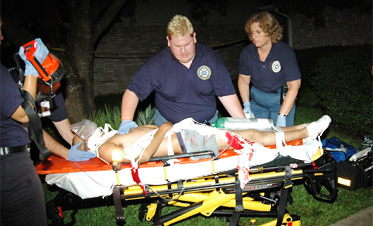 The Science
This multi-center study was conducted to evaluate PolyHeme, which is a hemoglobin-based O2 carrier (HBOC) derived from human blood. It has been demonstrated to have life-sustaining capability. It also has a longer shelf-life than human blood, which makes storage easier than whole blood or packed red-blood cells.

This was a randomized trial of PolyHeme versus traditional crystalloid (NS) in the prehospital setting. Once the patient arrived in the emergency department (ED), the PolyHeme group received up to six units of PolyHeme during the first 12 post-injury hours before receiving blood. Control patients received blood on arrival at the trauma center.

The patients were then followed for their mortality rate at day 30 as well as for their complications (adverse events).

The authors concluded “Patients resuscitated with PolyHeme, without stored blood for up to 6U in 12 hours post injury, had outcomes comparable with those for the standard of care. Although there were more adverse events in the PolyHeme group, the benefit-to-risk ratio of PolyHeme is favorable when blood is needed but not available.”

The Street
This article, which is full of twists and turns, is fascinating, especially for those of you who, like me, have watched this chase for the Holy Grail in trauma resuscitation for years. To have a readily available supply of oxygen-carrying resuscitation fluid that is as efficient as human blood while without the storage or compatibility issues would be an advantage.

When reading this study you have to look closely at the details to understand the goal. The purpose of the statistics was taken from both a superiority and inferiority of PolyHeme versus blood perspective. The authors powered the study to detect a 7% difference in the value of PolyHeme. The assumption is that the trauma victim would receive PolyHeme at the scene and continue this for up to 12 hours until blood was available. Perhaps these assumptions aren’t consistent with EMS delivery. Even if PolyHeme is found to be effective, the cost of it’s highly unlikely to translate into EMS delivery. Therefore, during prehospital care, most patients are going to receive crystalloids. What impact would that have had on the study? I don’t know, but perhaps the authors would be willing to consider that in their next phase.

Now let’s examine the mortality rate. The overall mortality rate was stated as not being significantly different between the two groups. However, that’s not entirely correct. Upon further analysis, the authors determined 17% of the 714 patients weren’t treated appropriately per the protocol. There were 71 PolyHeme- and 53 control-patient protocol violations. The authors don’t provide much detail as to what constituted a protocol violation, other than that perhaps they didn’t meet proper selection criteria and that, as one table indicates, this group appeared to have more serious injuries.

But with that being said, how were the protocol-violation patients identified? Were they determined retrospectively, after it was apparent that this group had a higher mortality rate? Or were the same criteria of protocol adherence applied to all 714 patients in a blinded manner? I don’t mean to question the integrity of the study, nor that of the authors, but the ramifications of the question this: If you add the protocol-violation patients into the whole equation, the total, treated-patient mortality rate for blunt-trauma victims is 18.2% for the PolyHeme group versus 10.3% for control patients.

I bring this question up because one of the authors proposes that the lack of superiority of PolyHeme in the study is due to the fact that the patients weren’t sufficiently critically injured. “Superiority in day 30 survival was not observed, likely because of several factors: short transport times, enrollment of patients who were not severely injured (only 34% of the control group required more than 6 U of RBCs in the first 12 hours), and the occurrence of protocol violations.

So, the quest for the Holy Grail continues.

Click here to get another take on the most recent news about PolyHeme written by Will Chapleau, EMT-P, RN, TNS.