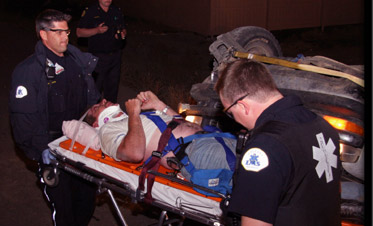 This study from the University of North Carolina Hospitals Emergency Department was undertaken in an attempt to define adequate spinal immobilization and the frequency with which it s applied to patients transported to the ED on backboards.

They defined an adequate strap to be one that has less than 2 cm of slack measured at the point where the strap contacts the patient. Quality of immobilization was measured by determining the number of straps used to immobilize both the head and body, including proper placement of head blocks and padding.

They evaluated 50 consecutive patients who were triaged as having low acuity injuries. They report that 15 (30%) had at least one unattached strap or piece of tape that should have attached their head to the board. Forty-four (88%) were found to have greater than 2 cm of slack between their body and at least one strap with the average strap tightness being 4.2 cm. Among those with any straps looser than 2 cm, the average number of loose straps was 3.4.

This study suggests that many patients are not well immobilized on arrival at the emergency department.

This is the first prospective study analyzing the quality of spinal immobilization on actual patients delivered to an emergency department. The authors readily agree that there are some limitations to the study, including the fact that only low acuity patients were evaluated and, more importantly, no one has defined precisely how tight immobilization straps should be to inure minimal movement without interfering with respirations or circulation.

Despite these limitations, the study is eye-opening in the fact that a significant number of patients had clearly inadequate immobilization. This raises the question as to why these patients were on backboards at all. Sometimes, it s more convenient for rescuers to place the patient on a backboard on scene to aid in extrication and then attach the backboard to the cot, when in fact the patient is not felt to be at significant risk for spinal injury. I suspect that this was the case for the majority of these low acuity patients.

What s clearly needed is a definition of proper strap tightness. I further suspect that straps that were adequately tightened on scene had loosened during transport as the patient assumed different positions and the weight dispersed. Perhaps we should make it routine to periodically readjust the straps during transport and before unloading the patient form the ambulance.

I m looking forward to the authors’ attempts to recreate this study on high and moderate acuity patients. They may also want to obtain more information regarding the patient s complaints and the rescuers reasoning for immobilization.

49ers’ Cannon Taken Off Field in Ambulance after Collision