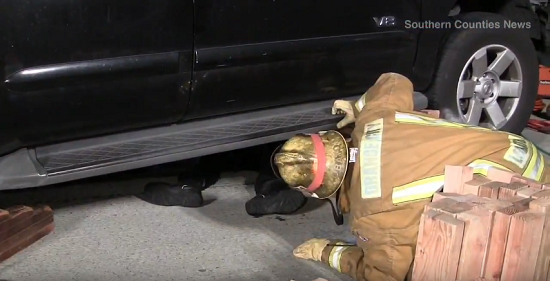 A chain reaction crash on Interstate 5 in California led to a motorcyclist being dragged nearly 200 feet while trapped beneath an SUV. The motorcycle rider was rear ended in the crash that involved as many as 7 cars and a truck towing a large boat. He was thrown to the pavement and then dragged by the SUV.

Traffic was heavy on the busy & wide Interstate during the Friday night accident. Due to the number of people involved and general confusion at the scene, it took about 10 minutes for someone to find the victim trapped under the SUV. He was alive and talking but seriously injured.

The 1st arriving unit from the City of Orange Fire Department quickly requested their Urban Search and Rescue to perform the heavy rescue needed to free the victim.

The USAR Truck arrive quickly, lit and stabilized the scene and began to use cribbing and airbags to lift the SUV off the young male victim.

With the SUV raised, Firefighters carefully slid the man to freedom. He condition of his helmet appeared to indicate he may have been dragged by his helmet as it was significantly worn down by scraping the pavement.

The victim was transported to the Trauma Center at OC Global Hospital in Santa Ana, Ca.. Although suffering from multiple serious injuries, the rider is expected to survive.