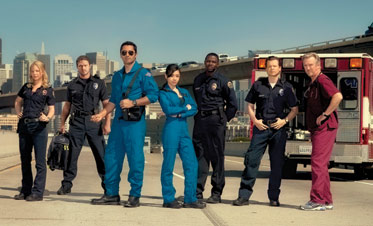 The new series Trauma premiering Monday night is being billed by NBC as “the first high-octane medical drama series to live exclusively in the field.” The show’s Website says it’s “like an adrenaline shot to the heart, an intense, action-packed look at one of the most dangerous medical professions in the world: first responder paramedics.” Unfortunately having had the opportunity to view the pilot in advance of its Sept. 28 premiere, I think the series is ripe for “Do Not Resuscitate” orders.

I realize that, having been raised watching the epic “Emergency!” TV series, I have a bias for shows that portray emergency personnel as professional in appearance and attitude, disciplined and ethical and compassionate to their patients.

I also realize that it’s 2009, and writers and producers like to inject sex into every episode, and have characters with cocky, rebellious 90210ish cast members who bring a host of personal problems to work, but this series bubbles over with a cast that should be stationed on Wisteria Lane, not the streets of San Francisco.

The premiere of Trauma doesn’t begin with a well-dressed crew checking their drugs and equipment before their first run. It starts with the sights and sounds of the boyfriend/girlfriend crew having sex in the patient compartment of their rig.

Then, before you can get the words “I can’t believe it” out of your lips, you hear the dispatcher (who obviously knows the way the crew starts their shift), tell “Naughty Nancy” Carnahan to button her blouse and respond to an emergency call.

You’re next brought to the rooftop resuscitation of an electrocuted patient who gets a helicopter response in the middle of the city. It’s here you’re introduced to the wacko of the show, helicopter paramedic Reuben “Rabbit” Palchuk, a raucous dude with an attitude as big as his helicopter. The show’s promotional hype says Reuben “oozes bravado to match his talent, but there’s a hint of vulnerability in there too… which charms the panties off all the girls. They don’t call him “Rabbit” for nothing.”

Hold on, it gets worse.

Turns out, “Rabbit” is also a sexist who personally selects the male member of the sex crew to accompany the patient because he doesn’t want a female medic in “his” helicopter.

Don’t be mad; be sad, because, when the chopper lifts off the roof, instead of departing and gaining altitude like every well-trained aeromedical pilot in the nation does, the pilot of “Angel Rescue 2” swoops down between the skyscrapers and collides with a sightseeing helicopter that’s also flying between the buildings. Everybody on board the choppers dies except for (you guessed it) “Rabbit.” Reuben the rebel lives to fly another day.

The show flashes forward a year and “Rabbit” returns to work cockier than ever and equipped with a new, post-traumatic “I can’t die” attitude. He takes his new, young, petite, ex-Iraq war chopper pilot on a high-speed, reckless ride down the hills of San Francisco, telling her it’s like the scene in Steve McQueen’s movie “Bullitt.”

“Bullitt?” “Bullitt” was released 1968, 41 years ago. Even I don’t remember Bullitt! If Rabbit’s law-breaking ride doesn’t ruin our image enough, he proceeds to rip the door off a drunk’s car as the man attempts to get in his parked car. Then he cons the inebriant into believing the incident was his fault. Don’t fret though, because Reuben, ever the gentleman, strolls into the nearby bar to retrieve a pitcher full of ice for the man to put his amputated fingers in.

Just when you think this show can’t get any worse, you’re taken to a corny multi-vehicle car-versus-gasoline truck MCI (caused by a text-messaging jerk), and forced to watch some of the most unethical EMS behavior you’ll ever see.

First, “Rabbit” lands in his chopper and waltzes up the highway and hears the text-messaging patient whining that “he wants to go in the helicopter.” Without skipping a beat, Reuben injects him with Versed and walks away.

Then, stoic Cameron Boone, a black paramedic who carries emotional baggage (and a strained marriage) after witnessing his friends die in the aeromedical crash, encounters a pretty blonde patient with a minor arm injury and “re-triages” her so she can get a ride in the helicopter with him.

While “Rabbit” gets set to ride shotgun and leave Cameron alone in the back of the chopper with the target of his affection, his rookie helicopter pilot, Marisa Benez, welcomes him to “Booty Airlines.”

There is a happy ending to this magical series premier though. Despite detesting “Rabbit” for his bad attitude and for surviving the crash that killed her boyfriend, she closes out the show by hopping in bed with him.

Johnny and Roy, please don’t watch this show. Stop by my house, and we’ll do shots of Ipecac instead.