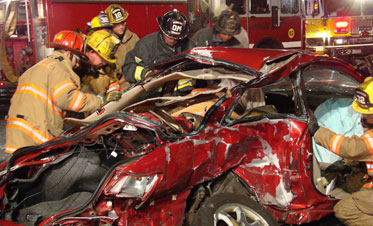 At 8:45 p.m. on March 3, Pikesville Volunteer Fire Company Squad 322 and Tower 323 (in”žBaltimore County,”žMd.) were alerted for a crash with reported entrapment on the outer loop of Interstate 695 between”žReisterstown Road and Interstate 795 (Rescue Box 2-63).

The first arriving crew,”žEMS 5, reported one patient trapped in a passenger vehicle. Subsequently it was learned that the car had been struck by two tractor trailers just ahead of the I-795 ramp. Working with other units, the squad and tower crew initiated extrication of a woman who was pinned inside a car that sustained significant damage. After she was freed, Medic 2 initiated patient care, and the patient was flown via Maryland State Police MedEvac to”žBaltimore’s R. Adams Cowley Shock Trauma Center. The crash is under investigation by Maryland State Police.

Got a great photo of care in the field?”žClick here to send your”žEMS image to JEMS.com.