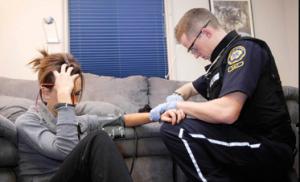 It was 1204 hours, Rescue 4 was dispatched to a private residence for a reported seizure. On arrival, the crew discovered a 32-year-old female sitting on the floor of the kitchen. Family members reported seeing her fall to the ground and “shake all over” for approximately one to two minutes.”ž

A rapid trauma exam revealed no outward signs of injury, although the patient reported tenderness to the temporal region. She was in no acute distress and said she had a history of seizures that occurred when she failed to take her medicine, which was the case that day. She further stated that she took seven or eight of her prescribed oxycodone that morning for back pain.”ž

One caregiver continued to ask questions while another assessed her vital signs. The patient appeared to be postictal, which was consistent with her history. Her initial heart rate was 94 bpm, respirations 16 and unlabored, and BP 138/90 with a pulse oximetry reading of 100% on room air. She reported having no signs or symptoms preceding the seizure.”ž

There were no allergies, and her medications included alprazolam, oxycodone and phenytoin. The patient had a history of generalized seizures with a diagnosis of epilepsy. She had last eaten approximately five hours earlier. Blood glucose was assessed and found to be 118 mg/dL. The patient initially refused transport, but at the lead paramedic_s insistence, agreed to go to the hospital.

During transport, there was no significant change in the patient_s condition. She continued to complain of pain in the “left side of her head,” although no crepitation, swelling or deformity was noted. Her pupils were 3 mm with a slow response to light. She remained confused to time and place, and her GCS was 14.”ž

Vital signs were reassessed en route. Pulse was regular and full at a rate of 86, respirations remained unlabored at 16, and BP was 148/70. An IV was established with normal saline via an 18-gauge catheter in a large vein. The receiving facility was contacted and advised of the patient_s condition. The crew arrived to the hospital within 11 minutes. During transfer of care to the emergency department (ED), the patient experienced another seizure with tonic-clonic activity.”ž

The ED physician ordered 2 mg lorazepam, and the patient_s seizure abated less than one minute after the injection. A CT scan of the head and cervical spine were ordered. The scans revealed a large epidural hematoma with a fracture to the left temporal bone. The patient was rushed to the operating room.”ž

The old adage, “if it sounds like a duck, walks like a duck and quacks like a duckÆ’it_s probably a duck,” doesn_t always apply to EMS. The crew in this case isn_t at fault, but there_s a lesson to be learned. Consider the sequence of major events: The patient was fully assessed, she initially didn_t want to go to the hospital but acquiesced based on the paramedic_s insistence, an IV was established and a radio report was provided.”ž

Although no significant signs pointed to underlying bleeding, there were clues that should have raised the level of suspicion. When a patient with a history of seizures is reported to have fallen, it_s important to gather history about the fall and assess the type of surface landed on and the body part that impacted the surface.”ž

In this case, the patient fell onto a ceramic tile floor with enough force to fracture her temporal bone with a resulting brain injury that wasn_t readily apparent. She also continued to have pain despite having reportedly taken seven or eight oxycodone pills, which alone should have raised suspicion. In hindsight (which is always 20/20), full spinal immobilization would_ve been indicated. If nothing else, the EMS provider should_ve remained alert to the possibility of a significant underlying injury.”ž

Hidden trauma is always a possibility and should be considered within the full scope of caring for patients reported to have had a seizure. It_s also important to note that although seizures can cause head trauma, the seizure itself may be induced by head trauma. It_s feasible that the second seizure in this case was a result of the underlying head injury.

Field caregivers represent an important link in the information chain and should relay scene information to receiving hospital providers. Passing along vital information about the fall and noted suspicions might make the difference between an aggressive approach in the ED versus a standard format of caring for a post-seizure patient.”ž

You are in a unique position to paint the picture of what transpired at the scene to raise the suspicion level of ED staff. Sharing complete information also results in a more informed hospital staff. The goal is to provide the best chance for a favorable outcome.”ž

Bear in mind that this was a real case involving a patient who required surgery to evacuate the hematoma. The lesson we can take from it is that we must always be vigilant for hidden trauma. Seizure patients have a significant risk of injury as a result of a fall, and the findings may not be clear, or they may be confused with signs that relate to the postictal period.JEMS

Chad Brocato,DHSc, EMT-P, is the assistant chief of operations with Deerfield Beach Fire-Rescue in South Florida, an adjunct professor of anatomy and physiology at Kaplan University and coordinator for the JEMS Games clinical skills competition. He recently completed a five-year project to create a fully narrated and interactive online paramedic program, which was released February 2009. Chad also co-owns Emergency Training Solutions in Boca Raton, Fla. Contact him at”žmedicteach@aol.com.”ž”ž