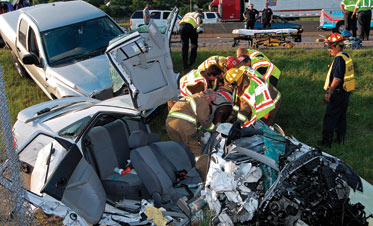 Pikesville Volunteer Fire Company Squad 322, Baltimore County Fire Department (BCoFD) Medic 14 and an off-duty Baltimore City Fire Department (BCFD) paramedic immobilize a motorcycle driver who lost control near a turn in Brooklandville, Md. Upon arrival at the scene, crews found the motorcycle on its side with two injured patients–a husband and wife. The off-duty BCFD paramedic reported to firefighters and police that she arrived just after the incident and saw the motorcycle driver face down and unconscious on the pavement. BCoFD personnel set up a safety perimeter around the motorcycle, put fire-suppression capabilities in place and wore safety vests for added scene protection. The crew of Pikesville VFC Squad 322 manually stabilized each patient’s head and neck, applied cervical collars and maintained stabilization while performing a physical assessment. The female patient had a deformity to the right arm. Both patients were carefully placed onto backboards and transported with traumatic injuries by BCoFD Medic 14 and Medic 101 to Sinai Hospital’s trauma center.