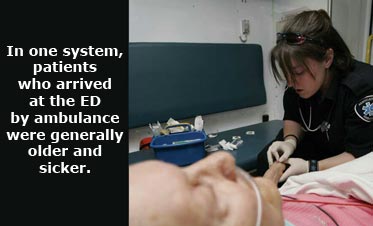 The Science
The objective of this study was to define the clinical and demographic characteristics of emergency department (ED) patients who arrived by ambulance (USERS) compared to those that didn’t (NON) during the same period of the day and week. The study’s objective was also to determine the reasons these patients chose their respective mode of transport.

A single researcher, a medical resident, queried a convenience sample of consenting ED patients regarding reasons for choice of transport to the ED, knowledge of ambulance cost and self estimation of illness or injury severity on a five-point Likert scale. A rating of 1 indicated the most severe illness or injury, and 5 was the least severe. This researcher then asked an attending physician or resident (after treating the patient) to agree or disagree with the patient’s decision on mode or ED arrival.

They concluded the USERS are in general older and sicker, and that they’re more likely to be admitted. They also concluded the majority ED physicians agreed with patient decisions on mode of arrival.

The Street
First of all, let me state my bias. I’ve always felt it isn’t for providers in the field to be deciding who should and should not be using EMS. That is a decision for policy makers. However, prejudices creep in, and those prejudices lead to fatal mistakes in care. That being said, this is an interesting study and certainly reveals several issues worth discussing. But first let’s look at some weakness.

The sample size is quite small for an ED that cares for more than 57,000 patients. I’m not sure if that sample can be truly representative of the patient population. Next, the patient complaints of the USERS and NON users were significantly different — with trauma leading the list for USERS. This is quite different than the typical suburban ED, where medical complaints prevail. Another issue is that the researcher was a trained medical professional who may have interjected selection bias and influenced how questions were asked and/or explained.

And finally, although the demographic table states no difference in insurance status between patients in the two groups, I would like to know the specifics of the insurance. I have patients who say they have insurance before whipping out their medical assistance card. This is not insurance. That is public assistance and significantly affects whether the ambulance fee will be paid.

Now let’s talk about the study’s strengths. I found the reason for transport significant, particularly in the area where “someone called the ambulance” led the reason. Perhaps this is an area for policy makers to examine for treat and release. With a larger sample size, it would be interesting to see if the patients that the attending thought didn’t need to come by ambulance were in fact those called for by someone other than the patient. It would appear from the tables provided that the major reason why non-users came by other means is they didn’t feel they were sick enough for an ambulance. The attending overwhelming agreed with them.

So what’s the bottom line? Patients appear to be, at least in this system, pretty good judges of when to drive themselves to the hospital. As for the rest? More data is needed.