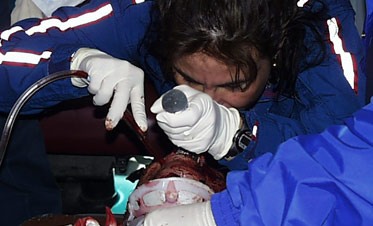 The Science
In this prospective study, the researchers attempt to determine a correlation between hospital mortality and prehospital intubation, and any other risk factors associated with it. Data was collected on trauma patients who were treated at Ryder Trauma Center in Miami from August 2003 to June 2006 — a total of 1,320 emergency airway interventions were performed by an anesthesiologist. Of these, 203 had initially been intubated in the field by EMS personnel. Of those 203 patients, the authors report the following:

The authors defined a failed intubation as, “the improper localization of an endotracheal tube on arrival at the trauma center or the need to use alternative rescue devices for airway management after intubation attempts.” Associated data collected alongside each patient included age, weight, gender, type of trauma, Glasgow Coma Scale (GCS), type of transport (air versus ground), their Injury Severity Scores and discharge status. The study concludes that, due to the high incidence of “failed” prehospital intubations, airway management of the trauma patient in the prehospital setting should only include the use of the bag-valve mask.

The Street
Although this study attempts to to determine a correlation between hospital mortality and prehospital intubation, it has several limitations. These include using a definition of failed intubation that might not be an EMS industry standard definition and using intubation data on patients with a presumably high likelihood of death.

Doc Wesley:This is one of worst, most biased examples of pseudo science you’re likely to read. First, what you must understand is that the average GCS of the EMS patients in this study was 4! The authors don’t report their Injury Severity Score, which is the best predictor of mortality. But with a GCS of 4, I’m presuming a high likelihood of death. This is confirmed in the article by the fact that 30% of the patients were pronounced dead on arrival at the emergency department (ED) without any resuscitation! For fairness, I’d like to see the authors report the mortality of the patients the anesthesiologists intubated with a GCS of 4.

In the discussion, the authors go to great lengths talking about the significantly lower “failed” intubation rate if the patients were transported by air. This is presumably because flight crews have greater experience, yet their statistics state that the survival rate of EMS patients was no different whether they were successfully intubated or not. This further confirms that the EMS patient population was severely injured.

Miami-Dade County did not have rapid sequence intubation (RSI) at the time of this study and therefore had the ability to use only a BVM and attempt endotracheal intubation (ETT) on patients with very low GCS. To correlate mortality on this very small subset is a great injustice to the service and in no way can be used to make a reasoned decision regarding the role of prehospital intubation.

Finally, the authors’ definition of failed intubation is simply not consistent with that of emergency medicine’s. If a patient’s airway can be managed with BVM, then that’s appropriate airway management. The ETT is not the “Gold Standard.” EMS care of the airway is a dynamic approach requiring a step-wise assessment with multiple fallback positions. Failure is defined as losing the airway and/or failing to recognize the loss.

Medic Marshall:In a previous article,“Flight Crew Use of King LT Versus Combitube,”I suggested such rescue airways as the King LT should start to replace prehospital intubation — not because I think endotracheal intubation in the hands of medics is dangerous; rather, rescue airways provide a faster, more effective means to control an airway until the patient can get to a hospital. This study suggests medics are just a bunch of cowboys with laryngoscopes for pistols, blindly intubating patients without regard for using proper steps to ensure the tube is properly placed in the trachea.

My next issue is: What is a “failed” intubation attempt? What I gather from this inference is that a paramedic failed if they were unable to insert an ET tube, whatever the reason, and required the use of a rescue airway. Unfortunately, we cannot all be anesthesiologists capable of intubating everyone, every time.

Correlating prehospital airway management techniques to hospital mortality rates in trauma patients really? It doesn’t take a brain surgeon to realize the absurdity of this comparison. What I gathered from this study is that the patient still would have had a negative outcome regardless of whether the paramedic flawlessly intubated the patient within an acceptable time.

Furthermore, it’s just as important to read what the authors aren’t reporting as what they are reporting. The authors make no mention of reviewing EMS charts for: times, documentation of confirmed tube placement in the field, number of attempts to intubate or why a rescue airway was inserted (possibly ETT was never attempted). My verdict is that this is junk research and Miami Fire Rescue and Miami-Dade Fire Rescue deserve an apology.