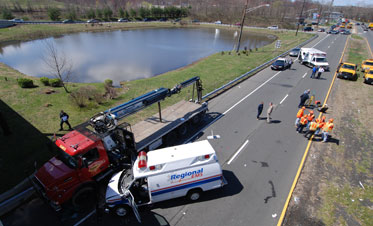 CLARKSTOWN, N.Y. — A blood drive is scheduled to benefit Bonnie Ames, the 20-year-old EMT who lost her arm in an April 14 ambulance crash in”žWest Nyack, N.Y. The blood drive will be from noon until 8 p.m. on Friday, April 18 at the Florida (N.Y.) Fire Department at”ž16 S. Main St in Florida, N.Y.

Ames, was injured when the ambulance she was riding in collided with a truck. Shortly after 10:15 a.m. Monday, April 14 the Clarkstown Police Department received the first of several 9-1-1 calls reporting a major accident involving an ambulance on Route 59 in front of the Palisades Center mall. The first arriving police officers reported an ambulance into the rear of a truck and requested the Nyack Ambulance Corp. and Rockland paramedics to respond. The West Nyack Fire Dept. was also requested to the scene for extrication, and a Medevac was placed on standby. EMS command requested the Medevac to launch for a patient with severe injuries, which included a partially amputated arm. STAT Flight landed on Route 59, which was closed in both directions. The victim was flown to Westchester Medical Center in Valhalla.

The accident is still under investigation by the Clarkstown Police Department.