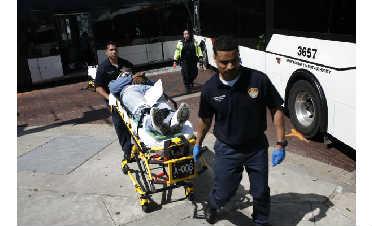 Nineteen people were injured, none seriously, when a Metro bus and a light rail train collided Monday afternoon in front of Metro’s downtown headquarters, the second such crash at that intersection in five weeks.

The union that represents all Metro employees is calling for a full investigation to make sure the traffic signals are working properly at Main and St. Joseph Parkway, and Metro officials said they will do just that.

We’re trying to determine if there’s something systemic here or if it’s just a fluke, said Metro spokeswoman Raequel Roberts. We’ll be pulling the tapes off the train and the bus to determine what went wrong and what happened. And we’ll be looking at what other measures we can take to determine why we’ve had two accidents at this intersection.

Monday’s crash happened at 2:15 p.m., when a Metro bus serving the Mesa and Liberty routes was westbound on St. Joseph Parkway and collided with the light rail car, which was northbound on Main.

Neither of the Metro employees injured in Monday’s crash was involved in the Feb. 8 crash, when nine people were hurt after a Metro bus and light rail train collided in the same spot at 3:30 p.m. The bus driver in last month’s incident, Reginald Rideout, 50, a 10-year Metro employee, was found to be at fault, Roberts said. A video captured by a camera on the light rail train showed Rideout had a red light at the time, Roberts said.

Rideout was initially suspended, but is now out on medical leave, Roberts said. The investigation into his wreck is still continuing, Metro officials said.

However, the union president who represents all transit hourly employees at Metro said Rideout has insisted his traffic signal was green just before the crash, which knocked Rideout semi-unconscious. Rideout had been involved in three accidents during his employment, two of which were minor but deemed preventable.

Actually, he doesn’t have that bad of a work record for 10 years, said David Gollinger, president of the Transport Workers Union of America Local 260. But as far as everybody in the press is concerned, he ran a red light, therefore, he was guilty. But the investigation hasn’t even been completed. We’re entitled to due process.

We’ve raised issues about the signaling in the past. And we’re curious about whether that might be a contributing factor here, Gollinger said of Monday’s crash.