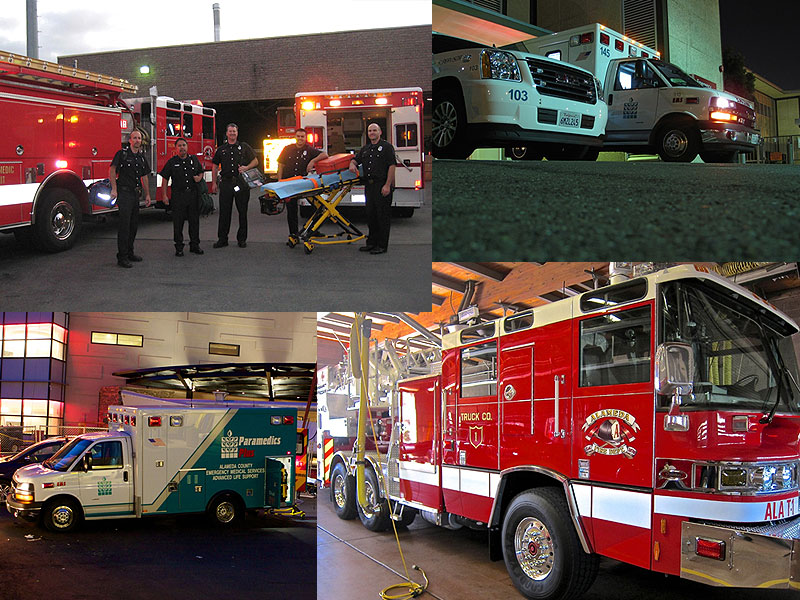 Our 911 Emergency Medical Services (EMS) systems have seen an unprecedented increase in the need for their services over the past decade. There are significant financial and regulatory constraints on all of our EMS systems as well as concern about the currently common use of lights and sirens response.1, 2 Managing this avalanche of patients will need the analysis of existing local experience to design rational responses.

Alameda County is an urban/suburban county in Northern California that is 737 square miles with a population of 1.6 million. The paramedic-staffed first response engines and transport ambulances respond to 140,000 EMS calls and transport 100,000 patients each year.

Our two dispatch centers use the Medical Priority Dispatch System (MPDS) and are certified as Centers of Excellence. The computer-aided dispatch systems are linked to a single electronic patient care record that is used by all paramedics in our county.

In a prior publication, we described our data analysis and presentation of the prehospital clinical outcomes for each dispatch determinant.3 By linking dispatch data with our electronic patient care record (EPCR) for each 911 call, we captured the MPDS determinant, disposition (transport, cancelled, patient declined transport, etc.), any critical interventions performed, and all deaths.

The optimal presentation of this data has been driven by several iterations over the past several years.4-7 The list of time-critical interventions include those that involve cardiac arrest, advanced airway management, STEMI/Stroke/Trauma alert patients, and those with treatment of active seizures. (Table 1) 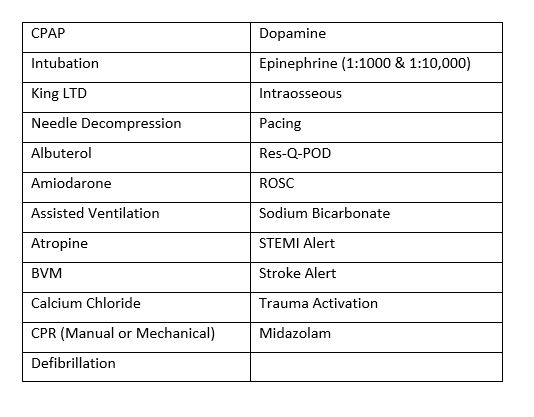 Early in this process, we recognized that the use of interventions such as IV placement, glucose measurement, and pulse oximetry measurement were too common to assist in predicting the need for ALS interventions or as a surrogate for severity and time-sensitivity of illness.

Fentanyl or morphine are the most commonly administered intervention and we chose not to include it among our critical interventions because analgesia is not time critical. The use of aspirin and nitroglycerin are also not included.

Our experience at analyzing this type of data at four different dispatch centers in three counties demonstrated enough regional differences to recommend that local data should be used to optimize any EMS system.

In the development of an optimal EMS system to be implemented in 2019, we proposed to identify those determinants with consistently low acuity that could have a limited response (no first response, Basic Life Support) with a longer response time standard without lights and sirens.

This optimization would have our first responders and transport paramedics available for the sickest patients who require a time-sensitive intervention. The risks of lights and sirens response have been well documented with an increased risk of ambulance and engine accidents as well as the “wake effect” causing ancillary traffic accidents.2, 8-10

A 2017 study from Utah estimated that nationally there are 6,500 EMS vehicle collisions per year and 32,500 wake-effect collisions per year.2 Our goal is to approach a rational response to 911 calls with a judicious use of lights and sirens, appropriate determinant-based standards for response times, and efficient resource utilization.

With data from 2015 and 2016, we developed a formula to create a Risk Priority Number (RPN) to help us in assigning each MPDS determinant to a specific priority response. (See Figure 1)

Risk Priority Number (RPN) is the multiplication of the following columns:

— Transport Rate increases patient risk versus Non-transports, hence is multiplied by 2 to help illuminate this. 1 is added to the rate to prevent multiplication by zero.

— Time Sensitive/Critical Calls are thought to be critical over and above transports, and hence are multiplied by 3. 1 is added to the rate to prevent multiplication by zero.

— Field Deaths are thought to be the most critical patient risk and hence are multiplied by 4. 1 is added to the rate to prevent multiplication by zero.

The Risk Priority Number allows us order each determinant by severity. A working group analyzed the list of ordered determinants and determined the cutoff between Priorities. A further analysis of operational issues required some changes, e.g. moving MVA determinants to require a first responder despite low rates of transport and interventions.

Then, the three weighted components are multiplied together to produce a Risk Priority Number. A working group then analyzed the list of determinants and applied a cutoff between priorities. 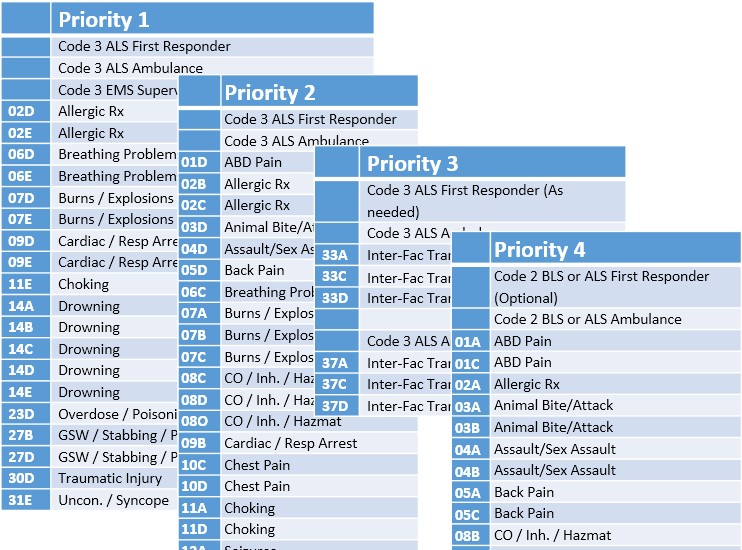 Above, an example of the priority groups. Download the complete set (PDF).

There were a number of operational issues that needed to be considered. For example, motor vehicle accidents had a low rate of transportation to the hospital and few critical interventions, but it was felt that there was an operational need for the engine first response.

Other determinants such as 12 A (Seizure stopped and breathing verified) received a Priority 2 (Lights and Sirens response) because of the rate (6%) of patients who received midazolam (Versed). 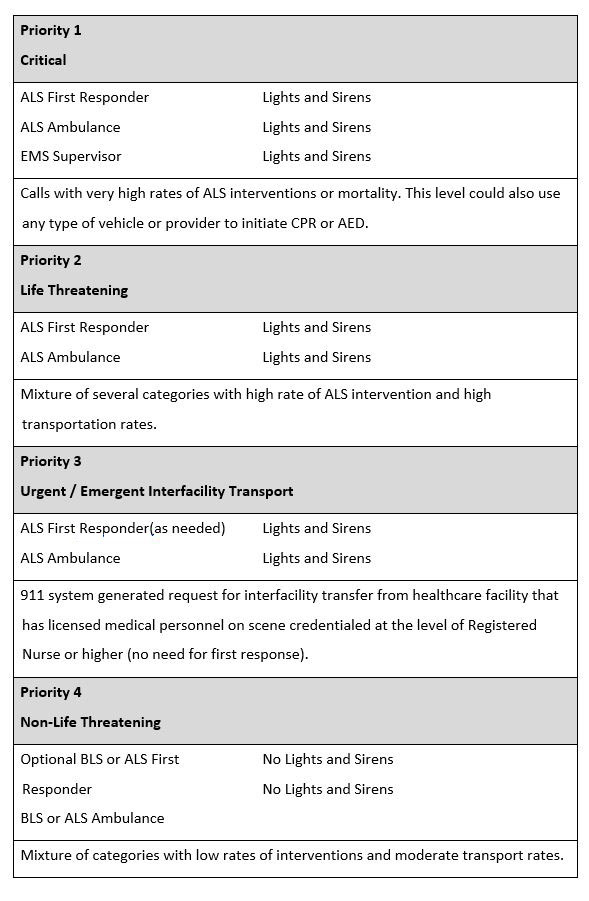 There were a number of determinants with small numbers and low rates of intervention but due to potential emotional responses were included in Priority 2. These include drownings, electrocutions, choking, and burns. Table 2 outlines the four priority levels as exemplified by the examples below:

This group will capture most of our cardiac arrest patients and will make up 9% of all calls. Multiple vehicles will be dispatched lights and sirens in order to get a defibrillator to the patient as soon as possible. These include many Delta and Echo determinants in various categories such as respiratory distress, cardiac arrest, as well as drowning and penetrating trauma.

This group will capture those patients who will need some sort of time-dependent treatment who make up 40% of all 911 calls. It includes a number of Delta as well as selected Charlie determinants with high rates of critical interventions among a variety of complaints such as breathing problems, choking, and burns.

This group includes all of our interfacility transports from clinics and emergency departments. The group from the emergency department is a very sick group of patients with high rates of mortality and critical interventions that commonly have an acute myocardial infarction or are post-cardiac arrest.

Because they are in a medical setting with health professionals, they receive a lights and sirens ambulance-only response (no first responders). This response is unchanged from our current practice.

This group of patients with a minimal need for a time-dependent intervention will not require an engine first response and will receive either a BLS or ALS ambulance without lights and sirens. This priority has a large number of determinants such as abdominal pain, sick person, or back pain.

It is this group that will see a decrease in the overall lights and sirens rate under our new response system.  For those jurisdictions who wish to respond with an engine-first response, lights and sirens response is clearly not medically indicated. This new EMS system integrated into a performance-based contract will have longer time standards/allowances for Priority 4 patients.

Our EMS system used our existing local clinical data to measure transport rates, critical interventions, and mortality rates for all of our dispatch determinants. This information is used to calculate a Risk Priority Number that is used along with operational common sense to develop a rational approach to utilizing our prehospital personnel in a manner that is best for our workers, for our patients and for our community. (Table 3 and Figure 2)

For our deployment GIS mapping and statistical analysis, we had assistance from Stewart Gary, Public Safety Principal, Citygate Associates. sgary@citygateassociates.com for further information.

0
A patient was apparently hurt when a Los Angeles (CA) Fire Department ambulance was struck by another vehicle on Thursday, On Scene TV reports.