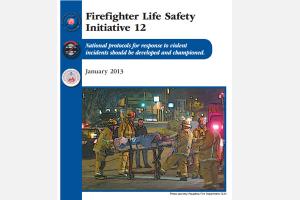 1. Do you use risk/benefit analysis for every call?
2. Do you have an effective relationship at all levels with the law enforcement agencies in your community?
3. How good is the information you get from your dispatcher?
4. Do you allow members to “first respond” directly to the scene?
5. Does your law enforcement agency use an incident management system?
6. When responding to a potentially violent incident, do you seek out a law enforcement officer when you arrive?
7. Have you told your fire officers/personnel that it’s OK to leave the scene if things start to turn bad?
8. Is there a point at which you don’t respond or limit your response to violent incidents?
9. Is your uniform easily mistaken for law enforcement?

These questions came from a March 2012 focus group of 35 participants representing 29 organizations. The NFFF-commissioned report from this group, “Firefighter Life Safety Initiative 12 Final Report: National protocols for response to violent incidents should be developed and championed,” is part of a resource package covering 16 Firefighter Life Safety Initiatives of the Everyone Goes Home program.

Preventing Line-of-Duty Injury
Everyone Goes Home is a national program by the National Fallen Firefighters Foundation to prevent line-of-duty deaths and injuries. In March 2004, a Firefighter Life Safety Summit was held in Tampa, Fla., to address the cultural, philosophical, technical and procedural problems that affected safety within the fire service. The most important domains were identified, resulting in 16 Firefighter Life Safety Initiatives. Everyone Goes Home started as a way of implementing initiatives at the local level.

Noting that there was, “an absence of response protocols for violent incidents in many fire departments” a focus group met in Anne Arundel County, Md., in 2012 to develop an expanded report for Initiative 12, including the nine questions.

There’s no enforcement authority or funding to implement the Firefighter Life Safety Initiatives. Some feel that more effort should be directed against those who assault responders.

“˜Paramedics Are Not Punching Bags’
New South Wales, Australia, ambulance service acting Commissioner Mike Willis announced a zero-tolerance policy toward violence against EMS personnel, noting on the agency’s website that there were six assaults against paramedics in early December.

There’s a perception that sanctions against those who assault EMS personnel are inadequate. In Illinois it’s a felony to assault a first responder; however, Chicago paramedics claimed, in a WLS-TV ABC News 7 report, that those who assault them get trivial punishment.

One technique that has been used is to fill a courtroom with emergency responders in uniform. In January, the New York Post reported that two dozen EMS workers filled a Manhattan courtroom to support their colleague who was allegedly choked by a drunken assistant district attorney.