One of the things you’ve gotta learn how to do in this business is give up your old ideas, Life-Saver–other than a few trusty safety rules, of course.

As an example, for the past eight years we’ve had a safe, reliable system for restraining people. It was based on a lot of research, a ton of experience and consistent annual practice. My agency published a five-part article about it, and that article won an international award.1 First responders still practice it annually.

The frequency of our behavioral emergencies has increased in the past several years, so our restraints have become a lot more important. But our whole system was built around our ambulance cots. 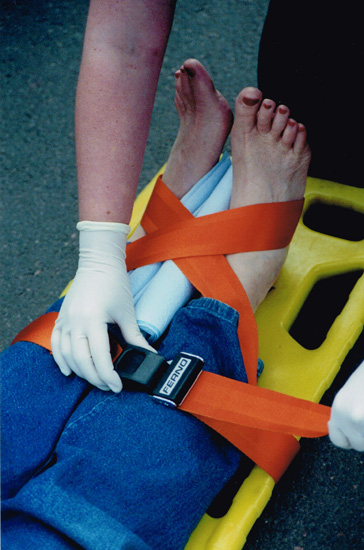 A stirrup, fashioned from a six-foot buckle strap, can serve as a quick restraint device for a violent patient’s lower extremities. Photo Thom Dick

When we adopted power cots, they were a lot heavier so we had to re-think everything. Instead of getting a cot to each patient, we had to find ways to get each patient to a cot–you just put them on accessory stretchers, like backboards or scoops. Sounds simple, right?

When we went to power cots, we bought Reeves stretchers. As you probably know, the Reeves is a flexible sleeve with rigid slats sewn into it, that kind of wraps around a patient when you lift it. We thought it might be a great restraint tool, but it didn’t work out. When you restrain somebody’s wrists to the stretcher and wrap it around them, their hands get close enough together to reach the closures on the restraint for the opposite hand. Nuh-uh!

We keep six sets of straps attached to our backboards, and each set has its own pair of Delrin plastic buckles. We thought those buckles would be strong enough to restrain people, but during testing we found several people who could break them with brute force. They’re good enough to stabilize somebody who’s not fighting, but restraints they ain’t.

Our restraint system uses different upper-extremity hardware for violent people than for those we’re not particularly worried about being violent. If violence is an issue, we cross the upper extremities at the nipple line of the chest and fasten the hardware to opposite sides of the stretcher. We don’t do takedowns; those we leave to the cops. With a five-person team, we can routinely fasten a varmint to a cot in less than a minute.

Our thinking is, if a patient gets too frisky we can simply raise the head end of the cot to tighten both arms. That doesn’t impact breathing as long as we cross the arms at the nipple line. If you restrict somebody’s chest, they can belly-breathe. If you restrict their abdomen, they can breathe with their chest. And either way, if they’re cussing you out, they’re probably breathing just fine. The only time they get into trouble is if you constrict the abdomen and the chest simultaneously–which happens when you cross their arms too low. (The cross-chest configuration also aims their palms downward, and that can protect your most enjoyable anatomy.)

None of this works if you don’t control the knees. If a patient can flex their knees, they can get loose. If they can’t flex their knees, you’ve got “˜em. You can quickly gain control of their knees with a single six-foot buckle strap. You simply form a stirrup for both feet with the middle of the strap, then run its ends X-wise across their shins and through your choice of hand-holds. Buckle it tightly across the upper thirds of their legs, and they’re done. (The higher, the better; it works best if it crosses just above their knees.) A folded sheet makes a good pad between the medial surfaces of the ankles.

As I recall, this strategy was originally developed in the early 1980s to keep someone from sliding toward the foot-end of a backboard when we had to carry them up an incline. It was never intended as a restraint, but it’s a foolproof option. And considering how often you have to negotiate turns in narrow hallways, the technique enables you to stand somebody vertically so you can turn them, then lay them down flat after changing your direction of travel.

You’ll need six people to fasten a violent patient to a backboard; one to control the head (wearing leather gloves), one each for the wrists and knees, and one to apply the hardware. Oxygenate them with a mask, and consider applying a spit shield as well.