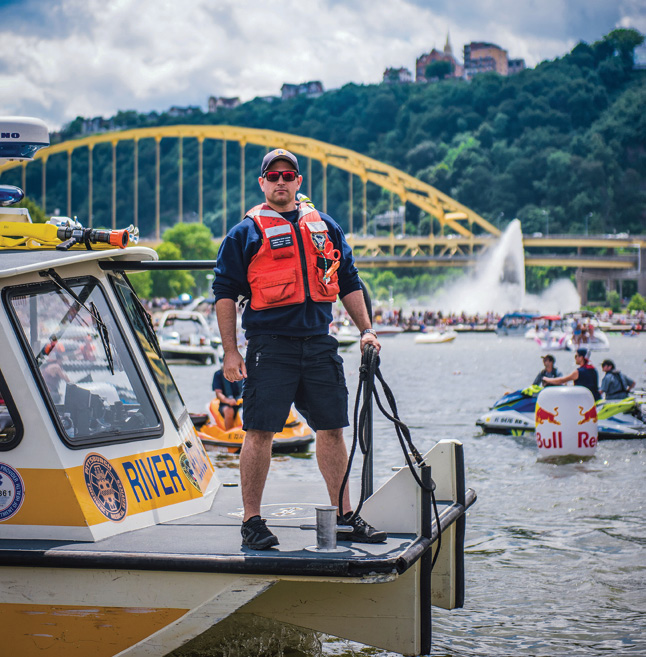 Pittsburgh sits at the confluence of the Allegheny, Monongahela and Ohio rivers. Centered around the point where the three iconic rivers meet, the city has expanded across the hills and valleys that surround the water. The port of Pittsburgh is the second busiest inland port and the 17th busiest port in the country. The rivers and their tributaries encompass more than 24 miles of navigable waterways within the Pittsburgh pool.1

During the summer months, thousands of recreational boaters and fishermen join the commercial barges and tugs that move their cargo through the region. Crowds of people flock to the city to enjoy sporting events, concerts and many other activities centered around the downtown waterfront. There are also a multitude of bridges that allow pedestrians, automobiles and trains to cross from shore to shore.

The rivers are at the heart of the city and, inevitably, people, vehicles and other objects end up in the water and must be retrieved. This responsibility falls on the elite Pittsburgh River Rescue team whose primary mission is to “help prevent, respond to, and mitigate all waterborne emergencies on the city’s waterways.”2 The 24 paramedic divers that staff the unit provide a medically directed approach to the rescue and recovery of victims from the water. The team is prepared to deliver ALS care to patients from the moment they’re brought to safety. Pittsburgh River Rescue is one of only a few EMS-based public safety dive teams in the country. The model developed by the city of Pittsburgh is a novel approach that brings advanced medical care to the person in need at the point of contact. 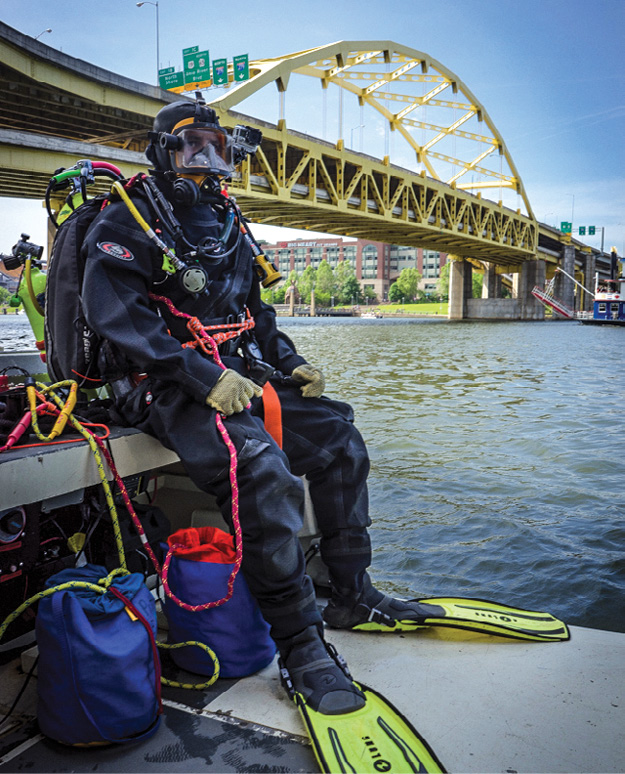 Prior to the formation of the unit in 1986, the waterways of the city were protected by the Pittsburgh river patrol, which was an exclusively law enforcement asset. The officers weren’t trained or prepared to provide medical care. It became clear that to effectively rescue and treat victims in and around the water, a medical component was needed. Subsequently, Pittsburgh River Rescue was formed.

Today the team is a joint operation between the bureau of EMS and the bureau of police, but it’s managed by the EMS command. The unit is staffed with two paramedic divers and a police officer at all times. The duty crew is mission-ready the moment an incident occurs. They’ll respond to any waterborne emergency and then initiate the operations needed to resolve the situation. If a prolonged dive operation is expected, additional divers will be deployed to the scene.

The team utilizes two identical SeaArks as their primary response vessels and dive platforms along with several ancillary watercrafts. The SeaArks are 31 feet long, have a 10-foot beam, a very shallow draft and are powered by twin 300-horsepower outboard motors. The boats are designed to be operated along the shorelines and other shallow areas without damaging the props.

Each vessel has an enclosed, climate- controlled cabin that’s spacious enough for the crew as well as the patients. The boats are equipped with all the necessary diver gear as well as a full complement of ALS equipment and medications. The two primary vessels are licensed by the Pennsylvania Department of Health for ALS quick response service (QRS) and they’re the only watercraft in the commonwealth to have that licensure. The boats are also outfitted with spare scuba tanks, subsurface communications equipment, a surface supplied air system, lifting bags, thermal imaging devices, night vision monocular, forward-looking infrared cameras, a 500-gallon per minute fire pump with accessories and sector scan sonar equipment.

When events like the annual Pittsburgh Three Rivers Regatta necessitate additional staffing, or if the divers are called out to areas outside of the city for mutual aid, the team also has an open-bow Boston Whaler, a variety of inflatable Zodiac-type vessels and an equipment truck. In the winter, when there’s significant ice on the water and the primary response crafts are unable to navigate through it, a Husky airboat is put into service.

The standard equipment package that divers wear in the water provides them with a complete envelope to protect them from cold temperatures as well as any contaminants that may be found in the water. It includes an Interspiro Divator AGA full-face mask and a dry suit.

The AGA masks have high-powered LED lights mounted to them as well as an integrated communications system that allows the diver in the water to stay in constant contact with the tenders on the surface. Each diver is issued a custom fit trilaminate dry suit with integrated boots and latex hood as well as the appropriate thermal undergarments.

When a diver enters the water, a search line is secured to their equipment and managed by a trained tender topside. The tender must observe the diver’s bubbles and the location of their tether line and use this information to deduce their location on the bottom of the river. The tender then directs the diver to swim in a predetermined search pattern. This method is necessary due to the extremely poor visibility in the rivers.

During a normal dive operation, only one diver is deployed in the water at a time. The second diver acts as a backup and is ready to splash immediately, should the primary diver get into trouble. In the recreational environment, diving without a partner is generally forbidden. This is different in the public safety environment for a variety of reasons.

Deploying a single diver who’s tethered with a search line and equipped with an integrated topside communication system tends to be safer than deploying multiple divers because it limits task overload, there are decreased chances of entanglement and the search area can be covered more efficiently. The National Institute for Occupational Health and Safety (NIOSH) provides investigative reports of all public safety diving fatalities and their data supports the conclusion that one diver down is safer than two divers down during search operations.3

There are some procedures such as rigging a vehicle with lifting bags that require two divers in the water at the same time. When this occurs, each diver has an individual search line, a separate tender and a separate backup diver.

The Pittsburgh River Rescue divers work in a hazardous and unforgiving environment. The challenges encountered as soon as a diver enters the water include standard visibility of 0—3 feet, strong currents, entanglement in debris at the bottom of the river and cold temperatures. 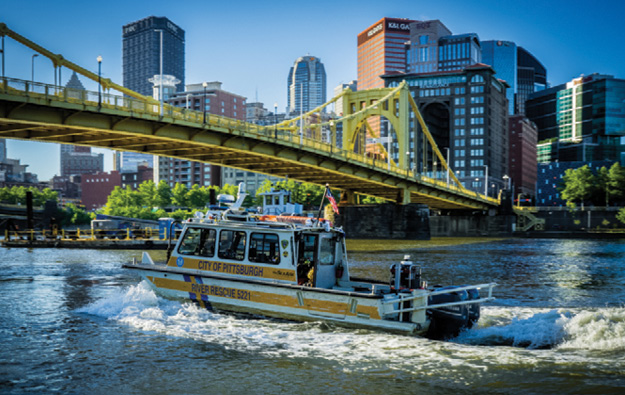 In order to prepare people to work in this potentially deadly environment, an exhaustive training program has been developed. Any Pittsburgh paramedic who wants to join the team must first pass a basic watermanship test that includes a 200-yard swim, 10 minutes of drownproofing (treading) with their hands out of the water for the last 2 minutes, and a 25-yard underwater swim.

Candidates who pass the test are ranked by overall seniority within the bureau of EMS. The number of candidates who proceed with river rescue training is based upon the unit’s personnel needs. Typically, 6—8 candidates will be put into training once every 3—5 years.

The curriculum is an exhaustive full-time program that lasts approximately five months. It’s designed to prepare students to function in a high hazard, subsurface environment through stress inoculation and comprehensive training. Thirty to forty percent of the candidates who begin the program are unable to complete it due to the mental and physical challenges of the course. Candidates are evaluated in the pool, in open water and in the classroom multiple times per week. Failure at any point will lead to dismissal from the program.

The students who successfully complete the surface water rescue portion of the program then move onto scuba diving. They’re introduced to the underwater environment with the Professional Association of Diving Instructors (PADI) open water and advanced open water courses. This allows the student to become familiar with the subsurface environment and start to learn the basic scuba skills that are the foundation for all advanced training.

Once those courses have been completed successfully, students must take and pass the International Association of Dive Rescue Specialists (IADRS) watermanship test to continue training. The test includes a 500-yard swim, a 15-minute tread with hands held out of the water for the last two minutes, an 800-yard snorkel swim, a 100-yard inert rescue tow and retrieval of an object from depth.

Each event is scored individually on a scale of one to five based on time and performance. Maximum time between events is 15 minutes. All candidates must have a cumulative score of at least 12 points to pass, and all divers on the team must successfully complete this test annually to remain active.

By the time the training is completed, the candidates will have completed at least 50 open water dives in all three of Pittsburgh’s rivers as well as surrounding quarries. Divers are assigned to the unit on a monthly rotating basis. Most spend four months of the year working river rescue and the rest of the time is spent at their regular duty station on an ambulance or rescue truck. 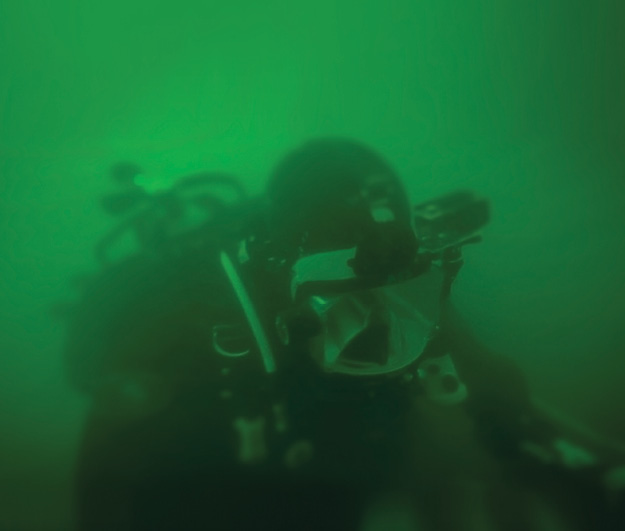 Drowning is a public health problem in the United States. According to the Centers for Disease Control, 10 people die every day from unintentional drowning and at least two of those victims are children.4 The best practice for mitigating these deaths is prevention through safe boating education, the use of personal flotation devices, mental health treatment and infrastructure around waterways that prohibits unintentional entry.

When prevention fails, the EMS divers of Pittsburgh River Rescue are ready to descend into the dark waters, find the victim, bring them to the surface and immediately initiate lifesaving care.

On a warm summer afternoon, the Pittsburgh River Rescue duty crew is finishing up routine testing and maintenance on the boat’s onboard fire pump when dispatch alerts the divers about a missing swimmer on the Monongahela river. The boat is quickly launched and responds to the incident.

When the crew arrives on scene, a frantic bystander yells that a man disappeared while swimming close to shore. The boat is secured, the divers prepare to splash, and land-based units interview the witnesses on shore to determine where the victim became submerged.

The point where a victim goes subsurface, called the “last seen point,” is the most critical piece of information for any dive operation. When a person or object sinks, it will almost always come to rest on the bottom of the river within a radius that’s equal to the depth of the water (when the current is 1 mph or less).

If an accurate last seen point is identified, the divers will be able to quickly recover the victim even in low visibility conditions.

The first diver enters the water and swims a sweep search pattern starting at the boat and working out into the channel to the point that the witnesses last saw the victim. The water conditions are excellent, with minimal current around 0.2 mph, and better than average visibility. After 45 minutes, the first diver completes his search and exits the water.

There are three additional divers on duty in the field and they deploy the second boat and respond to the scene.

Another diver deploys and searches a second area downstream from the last seen point. The second diver completes his dive without finding the victim. A third diver is deployed in an area even further downstream and recovers the victim within the first 10 minutes of his dive.

When the victim is found, he’s been in the water for close to two hours, so resuscitation isn’t attempted. The body is found approximately 50 yards downstream from the area where the witnesses indicated that he had been seen last.