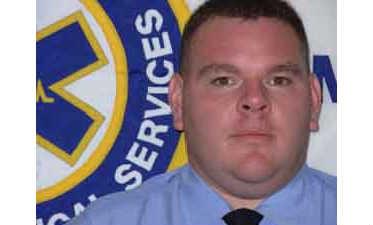 Daniel McIntosh, those who knew him say, died the way he lived – serving others, preferring to speak with deeds rather than words. A full-time paramedic, part-time police officer, and volunteer firefighter, McIntosh, 39, suffered an apparent heart attack Sunday night while chasing a man who was threatening to commit suicide, police said.

“He was a good guy who would do anything for anybody,” said Thomas Topley, executive director of Bensalem Emergency Medical Services, where McIntosh was a paramedic for 13 years. Bensalem Township police said that about 7 p.m. Sunday, a 911 call was received from the family of a mentally ill man who was threatening to harm himself.

McIntosh, who was working an overtime shift, and another medic responded to the call near Knights and Dunksferry Roads, according to Sgt. Andrew Aninsman. When McIntosh approached the man, he fled. Believing the man posed a danger to himself and others, McIntosh gave chase for several blocks, collapsed, and died. He apparently injured his head when he fell. His own rescue squad took McIntosh to Aria Health-Torresdale Campus, where he was pronounced dead. The man who fled was caught shortly after 7 p.m. and taken to a hospital for psychiatric evaluation. Police would not reveal his name or the name of the institution where he was hospitalized.

McIntosh was married and the father of two daughters, ages 1 and 5. He was a tactical medic for the Bucks County South SWAT team and had recently been hired as a part-time police officer by Hulmeville Borough, police said. He was also a volunteer firefighter for the Point Pleasant Fire Department in Upper Bucks County, according to rescue squad associates.

At a news conference yesterday, Bensalem’s public safety director, Frederick Harran, said that some boys dream of growing up to become a police officer, a firefighter, or a paramedic. McIntosh managed to become all three. At rescue squad headquarters and the Bensalem municipal complex, flags flew at half-staff yesterday. The rescue squad vehicle-bay doors were draped with black bunting. His colleagues remembered McIntosh as a doting father who was proud of his daughters and a dedicated colleague. “If you were having a down day, he could put a smile on your face,” said David Pugh, 29, a fellow paramedic. “He was the kind of guy you’d want for a friend or neighbor, the kind of guy you wanted to be around.”

“As a supervisor and friend, he was somebody I could always rely on,” said Chris Adams, 39, the squad’s battalion chief. “As big a guy as he was,” Adams said, “he had an even bigger heart.”