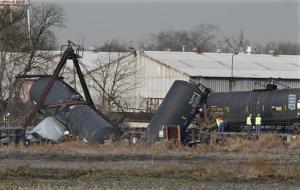 PAULSBORO, N.J. (AP) – A freight train derailed Friday on an old-style swing bridge that apparently buckled, three years after a similar failure, toppling at least two tanker cars into a creek and causing a leak of hazardous gas blamed for sickening dozens of people, authorities said.

State environmental officials said a tanker holding vinyl chloride, a gas that at high exposure levels can cause breathing problems and dizziness, leaked all of its contents. They said all of it had dissipated into the air by midmorning.

More than 40 people were being treated Underwood-Memorial Hospital, most having complained of breathing problems, said spokeswoman Karen Urbaniak. She said 11 arrived by ambulance and 31 walked in. All those seen by late morning were listed in stable condition.

Assemblyman John Burzichelli, who is serving as spokesman for the town, said the bridge apparently buckled as it did during a derailment in 2009. The bridge was rebuilt in 2010.

The National Transportation Safety Board was sending investigators to the scene.

Residents of Paulsboro, West Deptford and East Greenwich Township were told to remain indoors early Friday before an all-clear was given.

The derailment occurred on a bridge over Mantua Creek, which empties into the Delaware River just across from Philadelphia International Airport.

Three major freight trains cross the bridge daily, serving refineries and other customers in this industrial area. Calls to Conrail were not returned.

State Senate President Stephen Sweeney, whose district includes Paulsboro, said he had been told that complaints had been made in recent weeks about noise coming from the bridge and that Conrail was looking into it. But he said he didn’t have any details.

Authorities said at least four of the cars on the bridge contained vinyl chloride and a fifth was hauling ethanol.

They said the derailed cars would not be removed at least until Friday night and that the removal effort could take even longer.