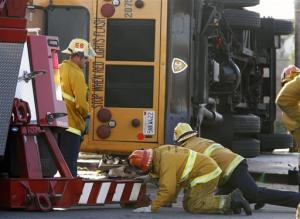 LOS ANGELES – Susana Romero was sitting at the back of the bus, as she usually does when she’s ferried back and forth from Roosevelt High School to the annex classrooms the school uses.

On Monday, the routine trip turned into a nightmare when a black BMW apparently ran a red light and struck and killed a pedestrian before slamming into the bus, flipping it onto its side in the middle of the street.

Three young men in the BMW are suspected of fleeing on foot from the busy intersection in Boyle Heights, east of downtown Los Angeles. Two of them – the 17-year-old driver and a 14-year-old passenger – were caught by a construction worker, who held them until police arrived, California Highway Patrol spokesman Miguel Luevano said.

The third male in the car, whose age was not clear, fled in a different direction and was later arrested when he turned up at a hospital, Luevano said.

The bus driver and 18 high school students all were taken to hospitals with minor injuries. The bus driver initially was reported in critical condition, then serious, but late Monday investigators determined all of the injuries were minor, Luevano said.

Romero, 16, said there was no warning before she heard the loud crashing sound and found herself airborne.

“We were in the air,” said Romero standing with her mother outside a police station in a white hooded sweat shirt and holding a Hello Kitty book bag. “We actually flew.”

Romero hit her head but was not seriously hurt. She said several students from the front of the bus were bleeding, but heard more sobbing than screaming.

“We were very protective of each other and helping each other out as we got off the bus,” Romero said. She said she and other students helped the more injured kids out through the back emergency exit, including two of her close friends.

The three males in the BMW were arrested and remained hospitalized Monday night with injuries suffered in the crash, Luevano said.

The driver could be facing felony hit-and-run and vehicular manslaughter charges and the two passengers could face conspiracy charges for fleeing the scene, Luevano said. The 17-year-old and 14-year-old will be taken to Eastlake Juvenile Hall for booking when released from the hospital, Luevano said. Police were still trying to determine the age and identity of the third male. Luevano said investigators were trying to determine if drugs or alcohol were involved in the crash.

The bus flipped at about 3:20 p.m. as the students were heading back to school from the East Los Angeles Skills Center, where they attend classes because of overcrowding.

A second bus also passed through the intersection and was somehow involved, but it was not clear how, Luevano said. He said that driver told investigators he hit something.

The crash site was just a few blocks from a police and a fire station, and dozens of officers and firefighters were at the scene within minutes.

“They were here almost immediately,” Los Angeles Mayor Antonio Villaraigosa said at a news conference. “Thank God for that.”

Luevano said there were dozens of witnesses at the intersection, which also is home to a Gold Line light rail stop.

The uninjured students were taken to the nearby Hollenbeck police station, where they were interviewed by police and firefighters before being reunited with family members.