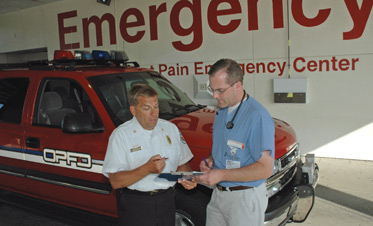 The emergency response provisions of the Ryan White CARE Act (Public Law 101-381) were repealed in the latest Congressional reauthorization of the law (Public Law 109-415). (See Emergency Response Provisions of Ryan White Law Repealed, March 2008 JEMS.) The repeal of these provisions has jeopardized the legal rights of some emergency responders following exposures to communicable diseases.”ž

The Occupational Safety and Health Administration (OSHA) Bloodborne Pathogens (BBP) Standard (29 CFR 1910.1030) continues to provide some legal protection for emergency responders. Section 1910.1030(f)(3) of this standard, titled Ë™Post-Exposure Evaluation and Follow-Up, requires that employers provide post-exposure medical follow-up to employees when they’ve been exposed. This section provides that employers are responsible for ensuring the blood of source patients in exposures is tested for communicable diseases, including HIV, hepatitis B (HBV), hepatitis C (HCV) and, in some instances, syphilis.

The problem with this and other provisions of the OSHA BBP Standard is that no further details are provided for employers. OSHA states this is a performance-based standard, which means that the standard identifies end results that are expected from employers, but doesn’t specifically identify the steps needed to reach those results.

The emergency response provisions of the Ryan White law provided those missing steps. There was a requirement for a designated infection control officer (DICO) for every emergency response employer in the country to be the go-to person when exposures occurred. The DICO was responsible for obtaining the disease status of the source patient no later than 48 hours after the exposure. Although the OSHA BBP Standard doesn’t contain these provisions, these are the obvious steps needed to reach the end result expected by OSHA.

Unfortunately, the standard is too ambiguous for some people. A municipal government employer in, Kansas, for example, recently wanted proof that there was a legal requirement for them to have a DICO in light of the repeal of the emergency response provisions of the Ryan White law. This indicates that some managers need to see a law that states clearly what’s expected of them. The Ryan White law provided much more clarity than what we’re left with in the post-exposure provisions of the OSHA BBP Standard.

What If OSHA Doesn’t Apply?

Another problem with the OSHA BBP standard is that it doesn’t apply to state and local governmental employees in about half of the states. State and local governmental employees are covered by federal OSHA standards only in states with occupational safety and health plans that have been approved by federal OSHA. Federal OSHA has no jurisdiction over state and local government employees in the following states/territoriesÆ’which don’t have OSHA-approved plansÆ’Alabama, Arkansas, Colorado, Delaware, Florida, Georgia, Idaho, Illinois, Kansas. Louisiana, Maine, Massachusetts, Mississippi, Missouri, Montana, Nebraska, New Hampshire, New Jersey, North Dakota, Ohio, Oklahoma, Pennsylvania, Rhode Island, South Dakota, Texas, West Virginia, Wisconsin, Washington, D.C., and Guam.

Repeal of these emergency response provisions has created a protection gap in states/territories without an OSHA-approved occupational safety and health plan. If a state/territory or local government employer in those areas fails to provide post-exposure medical follow-up and treatment to an emergency responder who has sustained an exposure, it will not risk an inspection or citation. Therefore, an”žEMS provider employed in a locality that doesn’t have a plan or law covering exposures to communicable diseases is without clear legal rights following an exposure.

Unfortunately, some of these employers might not provide post-exposure follow-up or other protective measures for employees unless specifically identified in a law. With OSHA not applicable and the Ryan White notifications repealed, this forces employees in states without OSHA plans into the position of having to convince their bosses they should provide this because it’s a legal and medical standard of care. With budgets constantly squeezed, employee protection can suffer in this scenario.

The OSHA BBP Standard provides that testing of the source patient’s blood must be done according to the law of the state in which the exposure occurred. This was true for the emergency response provisions of the Ryan White law as well. In some states, such as”žNew York, testing for HIV can’t be performed unless the patient consents.

Most state HIV testing laws contain an exception to the requirement for source patient consent if there has been a documented exposure to an emergency responder. For example, the applicable, Ohio law is similar to many state laws in that it begins with the general rule that a source patient must consent to HIV testing, but testing may be done without consent in a number of situations. One of the exceptions listed is for exposures to emergency responders.

Other states, such as Virginia, have what’s known as deemed consent, in which there’s no requirement for source patient consent to HIV testing when emergency responders have sustained an exposure because the state has deemed their consent.

Let’s illustrate this complex process with an example from another state — North Carolina. A paramedic who works for a municipality has reported a contaminated needlestick injury to their DICO. The DICO has confirmed that an exposure has occurred and informs the paramedic that the source patient’s disease status will be requested from the hospital to which the patient was transported, stressing that the appropriate post-exposure treatment will depend on that information. North Carolina has an approved OSHA plan, which means that state and local governments are covered and the employer’s DICO is responsible for ensuring the appropriate post-exposure follow-up pursuant to the OSHA BBP Standard.

The North Carolina law is a good example of many state testing laws in that it’s hard to follow and impractical for providing appropriate post-exposure follow-up. In our scenario involving a contaminated needlestick injury, a decision will need to be made by the exposed responder whether to take prophylactic HIV medication. There’s no absolute deadline for making this decision, but it should be done within 24 hours of the exposure, according to the current CDC guidelines. Realistically, the DICO will need to have the exposed responder seen by an emergency department (ED) physician at the hospital at the time the provider delivers the source patient and obtain certification of the exposure. The ED physician who certifies the exposure will then need to contact the source patient’s physician to initiate HIV testing.

It_s clear that without a DICO involved in this process there_s a very good chance that testing might not occur quickly, or at all. Without a rapid HIV test on the source patient, the exposed responder can_t make an informed decision on taking the prophylactic medication. Statistically, it’s probable the source patient isn_t HIV positive, but the exposed responder may choose to take the medication to be on the safe side. This medication is toxic and expensive, so clearly it’s better for everyone to avoid unnecessary administration by performing rapid testing and confirming the HIV-negative status of the source patient.

It’s in the best interest of both the employer and the employees to have a trained DICO to manage exposures immediately after they’ve occurred. Individual employees, no matter how much training they’ve received, can’t be expected to know what to do on their own. It’s safe to say that despite the best efforts of employers on infection control and communicable disease training, many employees will not understand what constitutes an exposure and what their risk is for contracting a communicable disease.

They need to know there’s a person they can call who’s capable of assessing the incident and making an exposure determination. A trained DICO will be able to calm the employee down by explaining why the incident didn’t constitute an exposure or, if it did, what the risk for disease transmission is and what steps will be taken to provide appropriate post-exposure medical follow-up.

Once the DICO has confirmed that an exposure has occurred, they need to inform the affected responder that post-exposure follow-up will depend on the disease status of the source patient involved in the incident. Again, the legal gap all emergency responders face at this time is that the procedures clearly outlined in the Ryan White law for obtaining this information are now gone. This makes it more important than ever to have a trained DICO, because without those clear procedures, the DICO will be forced in some instances to explain to hospital personnel why they still need to do essentially what they were mandated to do by the Ryan White law.

Where Do We Go From Here?

Although the repeal was accomplished simply by striking existing language from the law, the task of reinstating these provisions, either as part of the Ryan White law or as independent legislation, will be much more difficult and time consuming. In a presidential election year, the task will be all the more challenging.

Realistically, we probably can’t resolve this until 2009. In the interim, every emergency response organization in the country must make an effort to ensure its DICO position remains intact and the person serving in that capacity works harder than ever to make sure emergency responders receive the post-exposure medical follow-up they deserve.

The emergency response provisions of the Ryan White CARE Act (Public Law 101-381) were repealed in the latest Congressional reauthorization (Public Law 109-415). The following information will enable anyone to research this matter and obtain independent verification that these provisions are in fact gone.

The section pertaining to emergency response employees is in part E, Subpart II, Notifications of Possible Exposure to Infectious Disease. The code sections are 300ff-81 through 300ff-90 and remain in the code. Therefore, it appears these provisions remain in the law, which would account for some confusion among those who have tried to research this issue. However, if you click on the link to How Current Is This? you’ll see that Title 42 of the U.S. Code as currently published by the U.S. Government Printing Office reflects laws passed by Congress as of Jan. 2, 2006, and the codification process can take several years.

A July 7 update to the How Current Is This? helps clear up the confusion. The reauthorization legislation that repealed the emergency response provisions of the Ryan White Act, Public Law 109-415, has been added. If you click on 109-415à“ under the Law column, you’ll see the Ryan White Act as it exists today. Code Sections 300ff-81 through 300ff-90 are still part of the law, but they no longer address disease exposures to emergency responders.

James R. Cross, JD, is a legal consultant for Infection Control/Emerging Concepts in Manassas, Va. Since 1993, he has presented to the emergency-response community on the legal aspects of infection control. He’s also president of Crossroads Mediation Services in”žManassas. Contact him at jcrossroads@earthlink.net.

0
A paramedic is referred to the emergency department (ED) physician for evaluation. He and his partner transported a female patient in labor, who reported having had no prenatal care. En route to the hospital, the mother delivered a healthy term infant, but the paramedic was splashed in the face and eyes with amniotic fluid and maternal blood.