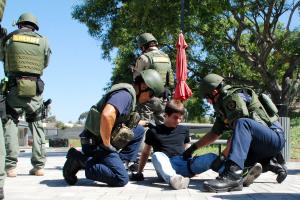 External hemorrhage is a common problem encountered in the management of prehospital trauma. The vast majority of hemorrhage is relatively minor and easily controlled by simple maneuvers, such as direct pressure and the application of a pressure dressing.

Occasionally, such hemorrhage can be brisk and life threatening. Military research shows that extremity hemorrhage is responsible for approximately 9% of battlefield deaths and represents the largest preventable cause of death in combat.1,2

The mortality from extremity hemorrhage in civilian EMS is much lower, estimated at 2.8% of trauma patients.3

However, despite the relative rarity of such injuries in civilian EMS, the appearance of military-type injuries are a possibility in every community, with mass shootings (Columbine, Aurora, Sandy Hook) and bombings (Oklahoma City, Boston Marathon) making the news more frequently.

In such cases, early management of hemorrhage by first responders can mean the difference between life and death by exsanguination. So, despite the infrequency of such horrific events, we must be ready to respond when disaster strikes our communities. First response in such situations may be by bystanders, law enforcement personnel or EMS.

In response to these incidents, federal and state authorities have convened panels of EMS and law enforcement experts to reevaluate our combined responses to such domestic mass casualty incidents. As part of these conversations, there developed a realization that some of the lessons learned from our combat trauma management experiences could be applied to minimize the morbidity and mortality of these tragic events.

One such effort was a National Highway Traffic Safety Administration Office of EMS-funded request to the American College of Surgeons (ACS) to develop an evidence-based guideline (EBG) for initial hemorrhage control by first responders, whether they be layperson bystanders, law enforcement or trained EMS providers.

This effort culminated in the recent publication of Evidence-Based Prehospital Guideline for External Hemorrhage Control: American College of Surgeons Committee on Trauma.4

Evidence-Based Guidelines
An EBG is a recommendation for treatment that’s developed using a structured process to evaluate the existing medical literature to answer specific treatment questions. For the current hemorrhage control EBG the Grading of Recommendations, Assessment, Development and Evaluation (GRADE) process was utilized.

Simply stated, the GRADE process begins by developing very specific questions to be answered. In addition, the values and preferences of the group regarding these questions are defined. For example, the expert panel felt that guidelines should guide care in the prehospital environment and should improve patient outcomes.

After these “ground rules” are established, the available medical literature is collected and reviewed to answer the defined questions. Each of the relevant articles is then reviewed, evaluated and graded based on the quality of the research. Articles are ranked as strong, moderate, weak or very weak evidence.

The prehospital hemorrhage control guideline described below was developed after review of all of the available medical literature on hemorrhage control and using this rigorous model. As new medical evidence becomes available, this guideline could change. However, at this time it’s based on the best available evidence as assessed by the ACS expert panel. The panel was made up of experts in trauma care, hemorrhage control, emergency medicine and EMS. It included both military and civilian members.

The findings of the expert panel are summarized in Figure 1 (download via link below). In summary, the first step in hemorrhage control is direct pressure and application of a pressure dressing. If that results in cessation of bleeding, then you’re done. However, if direct pressure is either “ineffective” or “impractical,” then more advanced hemorrhage control techniques are required.

Indications for More Advanced Techniques
“Ineffective” is pretty simple: Despite your efforts to apply direct pressure and a pressure dressing, the bleeding continues.

“Impractical” means these measures can’t be immediately applied or sustained because: a) the nature of the wound doesn’t allow effective hemorrhage control by this technique; or b) you don’t have sufficient hands, equipment or time to apply an effective pressure dressing.

This could occur, for example, because you’re first on the scene of an incident involving a patient with multiple injuries who needs attention (airway, breathing, circulation) in addition to a severe extremity hemorrhage.

Applying direct pressure and applying an effective pressure dressing may require more time or supplies than you have immediately at your disposal, since you also need to manage the unstable airway, decompress the tension pneumothorax, get lines started, etc.

In this case, the pressure dressing is impractical and the rapid placement of a tourniquet or hemostatic gauze may be required to stem the severe hemorrhage while other priorities are attended to.

Alternatively, in a mass casualty situation like a shooting at a shopping mall, you may be required to rapidly assess, triage and begin lifesaving treatment for multiple patients.

Until further rescue personnel arrive, the priorities must be to immediately stop obvious life-threatening hemorrhage, provide simple airway management maneuvers and to evaluate, triage and categorize all of the injured at the scene.

This is the current military model for mass casualty management and is at the heart of the SALT (sort, assess, lifesaving interventions and treatment/transport) triage system.6

In this situation, it’s “impractical” to apply direct pressure or a proper pressure dressing to each patient until all patients have been assessed and triaged. So advanced hemorrhage control techniques, such as tourniquets or hemostatic gauze, should be utilized, which may prevent exsanguination while the patients await further treatment and transportation to definitive care.

These latter two areas preclude secure tourniquet placement and require other means, such as the packing of hemostatic gauze to control severe hemorrhage.

The expert panel, based on the evidence available, felt that the strength of the recommendation for tourniquet use was “moderate,” because of the preponderance of beneficial effect and minimal harm in the literature, the vast majority of which were retrospective military studies.

Several specific points made by the expert panel regarding the use of these advanced hemorrhage control techniques should be reviewed.

Regarding tourniquet use, the committee suggests that a commercially-produced windlass, pneumatic or ratcheting device, which has been demonstrated to occlude arterial flow, be used; that narrow, elastic or bungee-type devices be avoided; that improvised tourniquets be utilized only if no commercial device is available; and that, in short urban transports, a properly applied tourniquet not be released until the patient reaches the hospital.

In longer transports, or in austere or complex situations (for example rural, wilderness or an entrapped patient with an extended extrication), on-line medical control should be contacted to consider replacing the tourniquet with an effective pressure dressing when/if possible.7

Regarding the use of hemostatic agents for junctional or torso injures, the expert panel suggests utilizing only hemostatic agents which are available in a gauze format, which support firm packing of the bleeding wound and have been determined to be effective and safe in a standardized laboratory injury model.

It should be noted that the federal Department of Transportation standardized curriculum and most prehospital training programs don’t currently teach wound packing as a required skill. We would suggest, based on this evidence, that effective wound packing be added to the standard prehospital and first responder skill set and that training in this lifesaving technique be added to EMS training programs nationwide.

Similarly, effective tourniquet use should be added to all first responder training programs, including training for law enforcement personnel, as they are often the first on the scene of active shooter or other disaster scenes.

More civilian prehospital research is needed to better define the use of tourniquets and hemostatic agents in the patients that we see daily. As was mentioned, much of the research on these techniques has been performed by the U.S. military, whose patient population is generally young, fit and healthy soldiers.

We need to know if these techniques are safe and effective for our typical civilian EMS patients, including children, the elderly and those with chronic cardiovascular and other diseases. Such research is currently underway in several large EMS systems.

Conclusion
The publication of this external hemorrhage control EBG will provide EMS medical directors and field providers the guidance and confidence they need in the training and implementation of local hemorrhage control protocols and the deployment of tourniquets and hemostatic gauze.

These advanced hemorrhage control techniques won’t be frequently required in civilian EMS situations. However, when needed, they can be lifesaving and are, therefore, important “tools in the toolbox” for the EMS responder. âœš